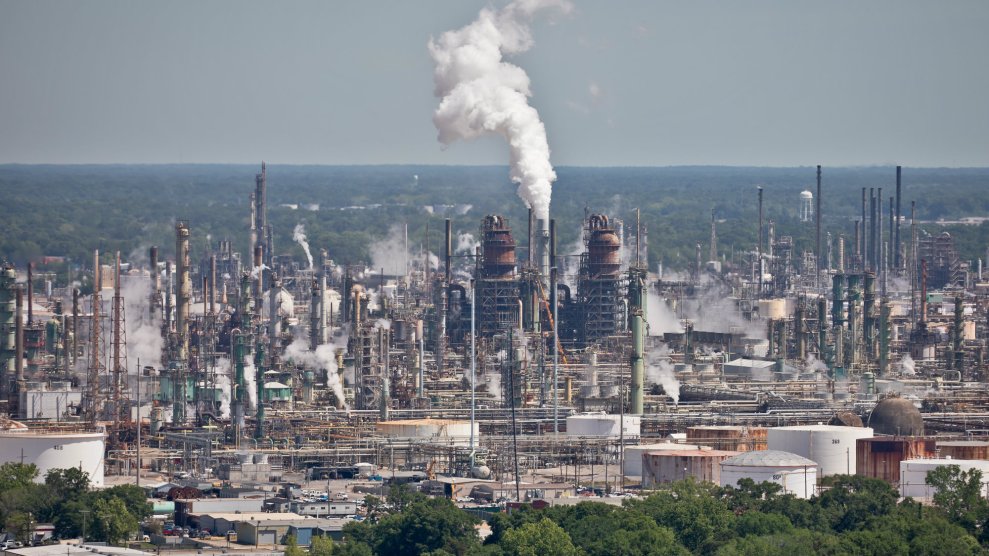 This story was originally published by Reveal and is shared here as part of the Climate Desk collaboration.


A nationally renowned drug rehab program in Texas and Louisiana has sent patients struggling with addiction to work for free for some of the biggest companies in America, likely in violation of federal labor law.

The Cenikor Foundation has dispatched tens of thousands of patients to work without pay at more than 300 for-profit companies over the years. In the name of rehabilitation, patients have moved boxes in a sweltering warehouse for Walmart, built an oil platform for Shell and worked at an Exxon refinery along the Mississippi River.

“It’s like the closest thing to slavery,” said Logan Tullier, a former Cenikor participant who worked 10 hours per day at oil refineries, laying steel rebar in 115-degree heat. “We were making them all the money.”

Cenikor’s success is built on a simple idea: that work helps people recover from addiction. All participants have to do is surrender their pay to cover the costs of the two-year program.

But the constant work leaves little time for counseling or treatment, transforming the rehab into little more than a cheap and expendable labor pool for private companies, an investigation by Reveal from The Center for Investigative Reporting has found.

At some job sites, participants lacked proper supervision, safety equipment and training, leading to routine injuries. Over the last decade, nearly two dozen Cenikor workers have been seriously injured or maimed on the job, according to hundreds of pages of lawsuits, workers’ compensation records and interviews with former staff. One worker died from his on-the-job injuries in 1995.

“They have to look at a different way to run their business operation other than merely absconding with the workers’ wages,” Michael Hancock, a former Department of Labor official, said when presented with Reveal’s findings. “They’re being preyed upon.”

An ongoing Reveal investigation has exposed how many drug rehabs across America have become little more than lucrative work camps for private industry. Patients have slaughtered chickens on speeding assembly lines in Oklahoma and cared for residents at assisted living facilities in North Carolina.

Among these programs, Cenikor stands out. It has a long history of accolades from sitting lawmakers and judges and even former President Ronald Reagan. Last year, the Texas-based nonprofit earned more than $7 million from work contracts alone, making it one of the largest and most lucrative work-based rehabs in the country.

Bill Bailey, who as Cenikor’s chief executive officer earned more than $400,000 in 2017, repeatedly declined requests for comment. But in a statement, Cenikor officials said the work provides “a career path for clients to be hired by companies who traditionally do not hire those with felony convictions, allowing them to return to a life of being a responsible, contributing member of society.” They said they follow all state and federal laws.

Many Cenikor participants work for a network of subcontractors that then dispatch them to the major companies.

“Our expectations are that all of our vendors follow both the applicable laws and regulations as well as our standards for suppliers,” Walmart said in a statement.

Exxon declined to answer specific questions, but in a statement said the company “contractually requires all of our suppliers to comply with all applicable environmental, health, safety and labor laws for themselves and their subcontractors.”

Many participants said Cenikor saved their lives and equipped them for success. After 18 months in the program, participants can become eligible to receive wages and graduate with jobs, a car and the tools to build a promising life. But fewer than 8 percent of people who enter Cenikor make it to graduation, according to the program’s own numbers, and therefore never receive a paying job.

“It was just a money racket,” said former Cenikor patient Alester Williams, who checked himself in to Cenikor for help quitting alcohol and cocaine. “That place was all about manipulation and greed.”

Cenikor patients and staff said work came before everything else. Staff routinely canceled doctors’ and legal appointments in favor of sending patients to work, records show. Working up to 80 hours per week left little time for counseling, therapy or sleep.

Like many participants, Ethan Ewers was ordered to complete Cenikor by a Texas judge after failing a drug test while on probation. Once he arrived, he said he worked 43 days straight in a sweltering warehouse unloading cargo containers for Walmart. One day in 2016, when he was bone tired and on the brink of relapsing, he finally snapped.

“I said, ‘You need to give me a day off because I can’t do this anymore,’ ” Ewers told Cenikor brass. “It was absolutely ridiculous.”

Multiple former staff members told Reveal that counselors routinely falsified counseling records to make it appear as though patients received more counseling than they did. During busy work seasons, some received no counseling at all.

Peggy Billeaudeau, who was the clinical director at Cenikor’s Baton Rouge facility from 2015 to 2016, said she got so fed up with the excessive work that she and her staff launched their own investigation. They pored over patient timesheets and painstakingly entered the hours into a spreadsheet. Billeaudeau discovered that many Cenikor patients were working 80-hour weeks and rarely received counseling.

She presented the evidence to top Cenikor officials at a staff meeting. “It was kind of like, ‘Peggy, don’t touch that with a 10-foot pole,’ ” she recalled. “It was about the money. Get the money.”

Some rehab staff have a financial incentive to work participants harder and longer, according to interviews. Former vocational services managers, who secured outside job contracts, said the more money they brought in, the larger their bonuses.

Cenikor managers had a compelling sales pitch. They promised companies cheap workers who were drug tested and always on time. Cenikor would pay for transportation and cover the costs of insurance.

“We tended to charge less than the temp agencies because of the demographics,” said Stephanie Collins, a former vocational services manager. “We were competitive.”

Patients, meanwhile, make nothing. They are told that their paychecks will be used to offset the cost of the program. Federal labor law allows Cenikor to deduct the costs of food, lodging and certain other expenses. But according to interviews and records obtained by Reveal, Cenikor typically brings in far more money from work contracts than it spends on patients.

Food stamps cover meal costs for all Cenikor participants, and in Louisiana, many are signed up for Medicaid to pay for counseling and medical care. Internal financial ledgers from the program’s Baton Rouge facility show that in 2016 and 2017, Cenikor’s job contracts regularly delivered more than twice as much money as its daily operating expenses.

At minimum, labor experts say this means Cenikor patients should see at least some of the pay from their work.

“I can’t fathom this being legitimate,” said John Meek, a former Department of Labor wage and hour investigator. “That math is just against it.”

Despite its reliance on work, Cenikor frequently has skimped on providing safety training or giving participants basic protective gear, such as steel-toed boots and harnesses.

In 2016, David Dupuis and other Cenikor participants went to work for a company cleaning up flooded homes filled with black mold and raw sewage. While regular employees got protective equipment such as masks and boots, Dupuis said Cenikor workers got nothing.

“They didn’t give us any protective equipment at all,” he recalled, adding that workers frequently caught staph infections. “It was extremely hazardous.”

“They didn’t give us any protective equipment at all,” he recalled, adding that workers frequently caught staph infections. “It was extremely hazardous.”

In 2018, Cenikor sent Matthew Oates to a private residence in Baton Rouge to trim trees without a safety harness, helmet or rope. As he teetered on a ladder 20 feet in the air, Oates lost his balance and tumbled from the tree. The fall broke his back.

Oates said his back still causes him severe pain and he regularly sees a chiropractor.

Cenikor has been warned repeatedly to make sure participants are safe on the job. After a Cenikor worker plummeted from an unstable platform and died in an office supply warehouse in 1995, federal labor officials told Cenikor that ensuring patient safety was paramount.

“Cenikor officials should take more of (an) active role in providing quality training” and “recognize hazards associated with the job,” officials with the Occupational Safety and Health Administration wrote. But injuries have continued to rack up.

In recent years, a Cenikor worker crushed his hands in an industrial press, another worker fell off scaffolding and shattered his knee at a chemical plant, and at least two workers broke their backs.

In Texas, Cenikor is not required to report on-the-job injuries to rehab regulators. But when officials with the Texas Health and Human Services Commission learned about the injuries from Reveal, a spokeswoman said the agency was “concerned about any injuries sustained to clients” and planned to investigate further.

In Louisiana, state law requires Cenikor to report injuries, but Cenikor has not submitted a single injury report to the Louisiana Department of Health in the last three years, even though Reveal uncovered numerous injuries during that time. Licensing officials said they would investigate the injuries if a patient complained about them.

The federal Department of Labor had the opportunity to crack down on Cenikor’s labor abuses more than 20 years ago. In 1994, Cenikor participant Loren Simonis graduated from the program and immediately filed a complaint with the wage and hour office, alleging violations of the Fair Labor Standards Act.

Under federal law, workers are entitled to minimum wage and overtime for their work. The Supreme Court ruled in 1985 that working for free in a nonprofit—even one with a rehabilitative purpose—was a violation of federal labor law. Cenikor can deduct the cost of room and board, but it cannot keep all of participants’ wages, former labor officials told Reveal.

But the Department of Labor declined to investigate Simonis’ complaint, according to records obtained by Reveal. Simonis got tired of waiting and filed a lawsuit against Cenikor, claiming unpaid wages. He eventually settled for an undisclosed sum.

Labor officials declined to comment on the department’s 1994 decision and refused to answer questions about whether investigators would look into Cenikor for wage violations. A department spokesman said the agency “takes all complaints of worker safety and health hazards and violations seriously.”

Today, Simonis lives in Oregon with his wife and kids and runs his own screen-printing shop.

“I’ve turned my life around,” he said. “I don’t think Cenikor had anything to do with it.”

This story was edited by Andrew Donohue and Matt Thompson and copy edited by Nikki Frick.