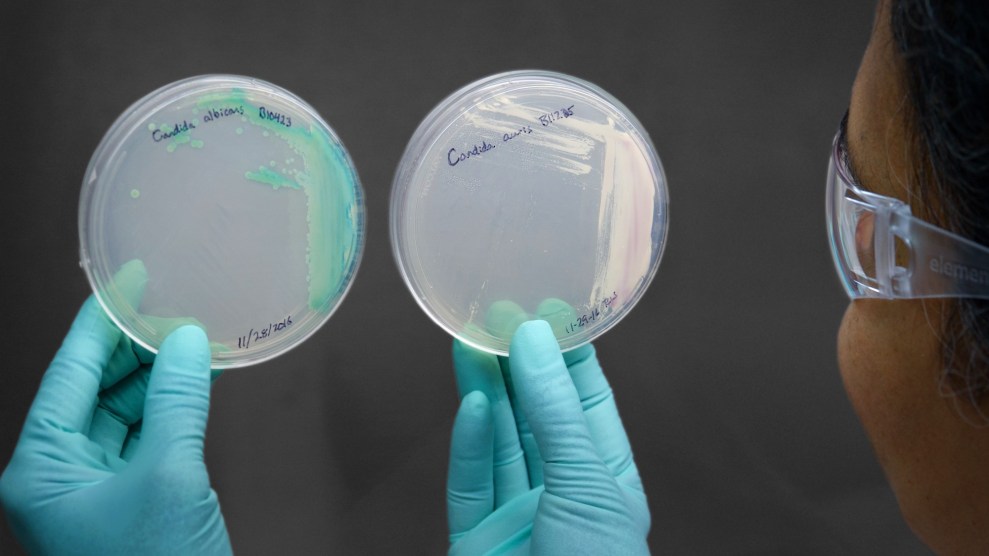 Last Saturday, the New York Times came out with an alarming report on Candida auris, a drug-resistant fungal pathogen that has been attacking patients with compromised immune systems in hospitals across the globe, including facilities in New York, New Jersey, and Illinois.

What caught my eye was the possible link, noted in the article, with widespread use of fungicides, chemicals used by farmers worldwide to kill fungi that can harm crops. In recent years, farmers have grown increasingly reliant on a class of fungicides called triazoles—the same chemicals used to fight fungal pathogens in humans. Globally, they’re the most widely used class of fungicides. In Europe, triazoles make up more than a quarter of all fungicides on farms. Here in the United States, use has spiked since the mid-2000s, the Centers for Disease Control and Prevention reports:

C. auris is a mysterious organism. It wasn’t discovered until 2009, in a patient in Japan. That same year, researchers in Korea reanalyzed samples taken between 2004 and 2006 and found what turned out to be C. auris in 15 patients. The fungus was already showing the ability to withstand anti-fungal treatments that, like those fungicides, are based on triazole compounds.

Farms and hospitals the world over rely on functionally the same set of chemicals to fight fungal pathogens—those that attack crops and those that attack people. If this sounds familiar, it’s because large-scale livestock producers for decades have used antibiotics to make animals grow faster—the very ones doctors need to treat bacterial infections in people, contributing to the rise of deadly antibiotic-resistant pathogens. In recent years, concern over the rise of resistant bacteria has forced meat producers in Europe and the United States to taper their reliance on antibiotics.

No definitive link has been established between agricultural fungicides and C. auris, and the pathogen’s sudden emergence remains a mystery. But farm-based fungicide use is under suspicion from scientists in Europe and the US Centers for Disease Control and Prevention as a possible trigger for it. According to the Times report, Tom Chiller, chief of the CDC’s Mycotic Diseases Branch, “theorizes that C. auris may have benefited from the heavy use of fungicides.” The article continues:

His idea is that C. auris actually has existed for thousands of years, hidden in the world’s crevices, a not particularly aggressive bug. But as triazoles began destroying more prevalent fungi, an opportunity arrived for C. auris to enter the breach, a germ that had the ability to readily resist fungicides now suitable for a world in which fungi less able to resist are under attack.

In an interview, Chiller reiterated the possibility of a link. With triazole fungicides killing fungi over large swaths of farmland, “the ones that are going to survive are the ones that are resistant—and they’re going to flourish,” he told Mother Jones. “And so you could see how that could select for a relatively rare Candida like Candida auris.” He stressed that little is known about the pathogen’s origin. “I threw the hypothesis out there to try to stimulate interest in figuring out why species like this emerge,” he said. Chiller added that he’s not aware of any current research to find C. auris in farm fields. Researchers have instead scrambled to study how to control it and stop its spread in hospitals.

Mahmoud Ghannoum, a professor at Case Western Reserve University and the University Hospitals Cleveland Medical Center who studies fungal infections, said the Department of Agriculture or the Environmental Protection Agency should immediately fund research that looks for C. auris in farm fields treated with triazole fungicides—and if it turns up, “it’s most likely the case” that fungicide use contributed to the development of resistance in human infections.

As the Times points out, while the rise of resistant C. auris remains a mystery, there is another deadly fungal pathogen lurking in hospitals that has definitively been linked to use of triazole fungicides: Aspergillus fumigatus. Like C. auris, A. fumigatus is causing severe, drug-resistant infections in immune-compromised hospital patients. Fortunately, cases of it are isolated because it doesn’t spread from patient to patient. In 2018, Maryn McKenna wrote an excellent Atlantic piece on the connection between A. fumigatus infections and fungicides. By 2013, the link between drug-resistant A. fumigatus infections and triazole fungicides was already well established in Europe.

A. fumigatus is a ubiquitous organism—it hangs out on soil surface, feeding on and breaking down organic matter, and its tiny spores are picked up and spread by wind. “Most people breathe in Aspergillus spores every day without getting sick,” reports the CDC. But the spores can trigger serious infections in people with compromised immune systems—and because the spores have evolved to withstand triazole antifungal medicines. For infected patients with “high-risk conditions”—for instance, patients who have just had traumatic surgeries like organ transplants—”mortality exceeds 50%,” a team of researchers led by CDC scientist Karlyn Beer reported in a 2018 study.

In that same study, Beer and her team demonstrated the presence of drug-resistant A. fumigatus in the United States and tied it directly to use of fungicides on farms. They reported that, starting in 2011, the CDC requested that US clinical microbiology labs send in A. fumigatus strains from patients’ lab samples to be analyzed for antifungal resistance. Of the 2,300 samples they received between 2011 and 2017, four carried a genetic marker that confers resistance to all triazoles medications, from patients with “no known previous exposure” to the chemicals. The kicker: In 2017, CDC researchers went looking for resistant A. fumigatus strains on farm fields where the triazole fungicides had been used—and found one such strain on a peanut field in an undisclosed state in the southeastern United States. It contained the same genetic marker as those strains found in the four patients.

“Together, these reports demonstrate that tritriazole-resistant A. fumigatus strains have emerged in the United States in both patients and the environment, likely caused by selection for resistance during environmental tritriazole [agricultural] use,” Beer and her team concluded. Once the A. fumigatus spores develop resistance on farm fields, they “are known to be carried long distances in the air, putting patients at risk for infection with resistant strains, even in areas without known agricultural fungicide usage.”

According to data collected from US government sources by the pesticide-tracking group Hygeia Analytics—data tool here—62 percent of total US peanut acres were treated with the triazole fungicide tebuconazole in 2016, and 25 percent with another one, propiconazole. Both were named in a 2013 Dutch study among five farm fungicides identified as a driver of resistance in hospital-acquired A. fumigatus infections among patients with no previous exposure to the chemical.

The use of fungicide propiconazole jumped nationwide from less than a half-million pounds in 2004 to more than 2 million pounds in 2016, according to the US Geological Survey. It’s used on soybeans, wheat, rice, fruits, vegetables, and orchard crops. Here’s its geographical range:

Just because fungicides have been identified as a culprit in driving resistant A. fumigatus strain doesn’t mean they’re also driving the resistant C. auris, the topic of that scary Times story.

But researchers say the possibility urgently needs to be investigated. “When you use antimicrobials—whether they’re antibiotics or anti-fungals or fungicides—you select for resistance,” said Martin Blaser, director of the Center for Advanced Biotechnology and Medicine at Rutgers and an expert on resistant pathogens. “Darwin was right: There’s natural selection—or in this case unnatural selection.”