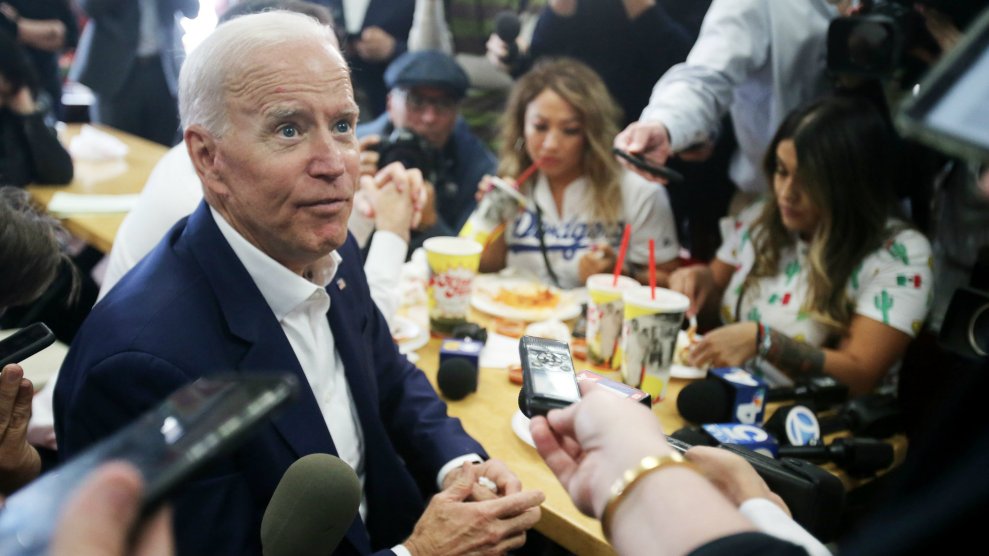 At a moment when mounting reports from the world’s top scientists indicate humanity is barrelling toward climate catastrophe and ecological collapse, Democratic presidential candidate Joe Biden is preparing a climate policy that appears to put the United States back on the pre-Trump trajectory.

The former vice president’s proposal is anchored in resetting the clock to 2016 by rejoining the Paris climate accord and reinstating Obama-era regulations on power plant and vehicle emissions, according to a Reuters report published Friday. The policy is expected to maintain a role for fossil fuels, and veer away from the Green New Deal framework that most of Biden’s top rivals for his party’s 2020 presidential nomination have embraced.

TJ Ducklo, a spokesman for Biden’s campaign, said in an email statement that the former vice president “knows how high the stakes are” and noted his record on addressing climate change.

“As president, Biden would enact a bold policy to tackle climate change in a meaningful and lasting way, and will be discussing the specifics of that plan in the near future,” he said. “Any assertions otherwise are not accurate.”

The descriptions of the forthcoming policy offer only a first glance at Biden’s proposal to address a global crisis that, over the past year, has surged to the top of Democratic primary voters’ concerns. But the position appears dangerously out of step with the United Nations’ Intergovernmental Panel on Climate Change. The world’s leading climate science body warned in October that governments must cut global emission by nearly half and begin removing carbon dioxide from the atmosphere to keep warming from exceeding 1.5 degrees Celsius, or 2.7 degrees Fahrenheit, at which point the havoc wreaked by extreme weather and sea level rise is expected to cost $54 trillion and kill millions.

The finding, confirmed a month later by 13 federal agencies in the congressionally mandated National Climate Assessment, cast a shadow over the Obama administration’s climate legacy. While the 44th president forged the first global emissions-cutting deal to include the United States and China, his administration oversaw the rapid expansion of US oil and gas production, a fact about which Obama boasted last November. Expanded US drilling threatens to add 1,000 coal plants’ worth of greenhouse gases by the middle of the century, according to a January analysis by researchers at more than a dozen environmental groups. That will make the emissions reductions set out by the IPCC all but impossible to meet, and discourage countries like China, India and Indonesia—whose emissions are growing at a rapid clip—from adopting cleaner development strategies as the world’s richest nation and biggest historic emitter fails to set an example.

“The solution to a problem created by burning fossil fuels cannot be the burning of fossil fuels.”

“The greatest fault in his proposal is the suggestion that natural gas can be part of the solution,” Michael Mann, a climate scientist at Pennsylvania State University, said by email. “The solution to a problem created by burning fossil fuels cannot be the burning of fossil fuels.”

Biden has called climate change an “existential” threat. And during a campaign speech in Iowa earlier this month, he noted that he was “one of the first guys to introduce a climate change bill, way, way back in ’87.” PolitiFact looked into the claim and found it to be true.

Yet, in a speech last month, the former vice president parroted a familiar oil and gas industry line, declaring, “North American energy makes us independent.” And, according to Reuters, he picked Heather Zichal as a climate adviser. Zichal, 42, who advised in the Obama administration, served on the board of liquified natural gas giant Cheniere Energy Partners from 2014 until last year.

Zichal came to Biden’s defense in a post to Twitter on Friday afternoon, saying “Reuters got it wrong.”

I expect as president @JoeBiden would enact a bold policy to tackle climate change in a meaningful and lasting way. Reuters got it wrong. Any suggestion that it wouldn't is in direct contradiction to his long record of understanding climate change as an existential threat.

“There may have been a chance for modest, ‘all of the above,’ ‘middle ground’ climate strategies twenty years ago but we’ve passed that point now,” said Peter Gleick, a climate scientist and co-founder of California’s Pacific Institute. He added that “many politicians still fail to understand or accept the severity of the climate crisis or the speed with which we now have to act.”

Of the nearly two dozen Democrats vying for president in 2020, only two—Washington Gov. Jay Inslee and former Texas congressman Beto O’Rourke—have laid out detailed climate policies, as the Guardian reported this week. But the plans set a far different course from what former President Barack Obama envisioned.

O’Rourke, who climate activists criticized for pro-fossil fuel votes in the past, proposed a sweeping $5 trillion plan to beef up infrastructure and make the United States carbon neutral by 2050.

Sen. Bernie Sanders (I-Vt.) threw his weight behind the Green New Deal resolution that Rep. Alexandria Ocasio-Cortez (D-N.Y.) and Sen. Ed Markey (D-Mass.) released in February, which calls for a sweeping national industrial plan to decarbonize the United States and expand the social safety net over the next 10 years. Roughly half the 21 Democrats running for president pledged to reject donations from the fossil fuel industry.

“In an election where more than half the field had pledge to reject fossil fuel money, Biden has a fossil fuel bird member leading his climate policy development,” David Turnbull, a spokesman for the nonprofit Oil Change US, said by email. “This is not a good look, and worse yet will lead to terrible policy stuck in the past.”

Andrew Dessler, an atmospheric scientist at Texas A&M University, said the policies described in the Reuters story “do not sound very ambitious” and would likely blow past the additional degree of average temperature rise the Paris Agreement aimed to cap global warming.

“My rough intuition is that this approach would be more in line with stabilizing at 3-4 degrees Celsius of warming, rather than staying below 2 degrees Celsius,” he said by email. “So I would categorize this as a bit disappointing.”

Yet he said it may be a “politically savvy” appeal to draw voters who elected President Donald Trump in 2016. That may be a strength in the general election, but the proposal drew fierce criticism from Democratic activists who could influence the primary election.

“I’m a Woolsey Fire survivor,” RL Miller, political director of the political action committee Climate Hawks Vote, said referring to one of the historic wildfires that blazed in California last year. “Does Biden mean that the next wildfire will compromise with me which half of my home emerges unscathed?”

Sunrise Movement co-founder Varshini Prakash, whose youth-focused group led the protests that propelled the Green New Deal into the national conversation last year, called Biden’s “middle ground” policy “a death sentence for our generation and the millions of people on the frontlines of the climate crisis.”

Sunrise Movement co-founder Varshini Prakash called Biden’s “middle ground” policy “a death sentence for our generation and the millions of people on the frontlines of the climate crisis.”

The Green New Deal remains the only framework on the scope of the crisis, and the movement to enact it initially drew stunning bipartisan support. A December poll from Yale and George Mason universities found 81 percent of voters, including 64 percent of Republicans and 57 percent of conservative Republicans favored the policies outlined under such a program. But months of negative coverage on right-wing media outlets like Fox News—which routinely smeared the Green New Deal by falsely claiming it would ban hamburgers, trigger genocide against white men or set the stage for Stalinist government policy—dramatically eroded support among Republicans, new polling shows.

Labor unions, a key constituency for Democrats, are divided on the Green New Deal. The building and construction trade unions, a powerful force in the labor movement, rely on the fossil fuel industry for lucrative jobs with coal trains and pipelines, and as such have opposed proposals that threatened those sectors.

Yet proponents of the Green New Deal say a Democratic leader with strong appeal to unions could help bridge that divide by promoting the policy’s potential to generate unionized clean energy jobs.

“It’s a false tradeoff to say that we have to seek moderate climate policy in order to appeal to both the environmental left and the labor movement,” said Greg Carlock, the researcher who authored the left-leaning think tank Data for Progress’ Green New Deal blueprint last year. “We can decarbonize our economy and we can grow good jobs.”