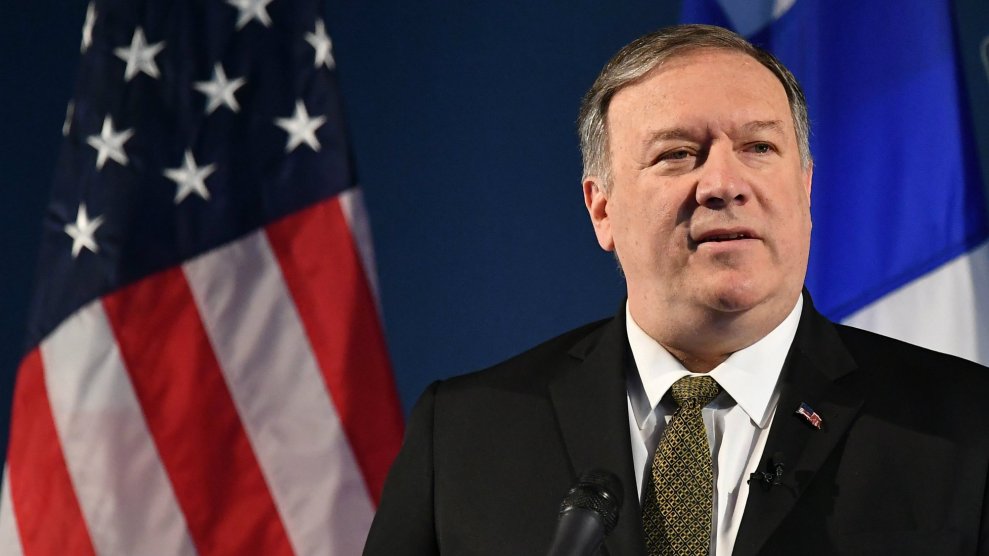 For the first time in over two decades, the eight nations making up the Arctic Council concluded their biannual meeting without a collective declaration on Tuesday, because the United States opposed any mention of climate change. The Trump administration fought any reference in the document to the Paris climate agreement or the Intergovernmental Panel on Climate Change’s October report on global warming, which prevented the council from issuing a typical ministerial declaration, delegates to the meeting said Tuesday.

“The others felt they could not water down climate change sentences,” Finnish delegate Timo Koivurova told the BBC.

The Arctic is one of the fastest-warming areas of the world, which Secretary of State Mike Pompeo obliquely acknowledged in remarks delivered Monday at the council’s biannual meeting, which convenes stakeholders and representatives from indigenous groups to discuss how to preserve the region. “Steady reductions in sea ice are opening new passageways and new opportunities for trade,” he said, making the Arctic “an arena for power and for competition.”

Fear of Russia and China exploiting the Arctic for resources and coming into conflict with the United States have animated military preparation since at least 2009, when the Navy released a 33-page roadmap for navigating a warmer Arctic. These plans have taken on new urgency in an era where the Pentagon has prioritized competition with great powers like Russia and China over threats from terrorist groups like al Qaeda and ISIS.

“We’re entering a new age of strategic engagement in the Arctic,” Pompeo told attendees, “complete with new threats to the Arctic and its real estate, and to all of our interests in that region.” His remarks focused primarily on the security concerns brought about by the region’s transformation, which is not typical for Arctic Council gatherings where members typically focus on “sustainable development and environmental protection in the Arctic.” Pompeo’s statement skirted around global warming’s role in accelerating that transformation and highlighted the economic opportunities, like trade and energy development, that could create new arenas for conflict in the area.

“Because of climate change, the ice is receding and these opportunities are emerging,” says John Conger, director of the Center for Climate and Security and former acting assistant secretary of defense for energy, installations and the environment. “You have to recognize that things are changing—and that changes your entire strategic calculus.”

The US has had to play catch-up since the introduction of its first Arctic roadmap in 2009, because defense officials have been slow to embrace the region’s strategic importance. “Today we do not have the communications equipment, navigation aids, and sufficient ice hardened ships to respond to natural or manmade disasters in that fragile area,” retired naval officer David Titley, who led a task force on climate change that produced the original Arctic roadmap, told lawmakers at a House Armed Services subcommittee hearing on readiness in March. “In other words, we are not prepared in the short-term for the rate of increase and we must invest today in increasing our capability and capacity.”

The Pentagon’s focus has shifted dramatically in just a few months. This fall, the USS Harry S. Truman became the first American aircraft carrier in nearly three decades to enter the frigid Norwegian Sea, and last month, the Navy and Coast Guard spent $1.9 billion to build icebreakers capable of navigating the Arctic and Antarctica. The Pentagon is in the process of finalizing a new Arctic strategy after the Navy launched a review last year. The Washington Post reported in March that the plans are expected to focus heavily on China.

The irony is that all these efforts must be implemented by an administration that has been determined to deny the crisis of global warming. Under Trump, who has called climate change a Chinese hoax and stocked his administration with oil and coal lobbyists, the United States is rolling back environmental regulations and ceding its international role as a leader in climate change advocacy. At a G20 summit at Buenos Aires in December, the United States was the lone member to not affirm its support for the Paris climate agreement, which Trump took steps to exit in June 2017.

Meanwhile, military officers all but unanimously highlight the importance of climate change whenever asked by lawmakers during congressional hearings. Sen. Elizabeth Warren (D-Mass.), a member of the Senate Armed Services committee who has advocated for the Pentagon to take more concrete action to address climate change, identified at least half-a-dozen moments where military leaders acknowledged the impact of global warming in a letter to Gen. Joseph Dunford, Trump’s top military adviser, last month. “This uniformity of opinion among military leaders underscores my concern about the need to act vigorously and expeditiously to mitigate this threat,” she wrote.

But even as it has made some efforts, the Pentagon has been slow to treat climate change as a serious issue and has dragged its feet in several recent instances that have irked lawmakers. Earlier this year, acting Defense Secretary Patrick Shanahan submitted a congressionally-mandated report on the impact of climate change that one Senate Democrat mocked for having “about as much value as a phonebook.” DOD redid the report and turned it in again in March.