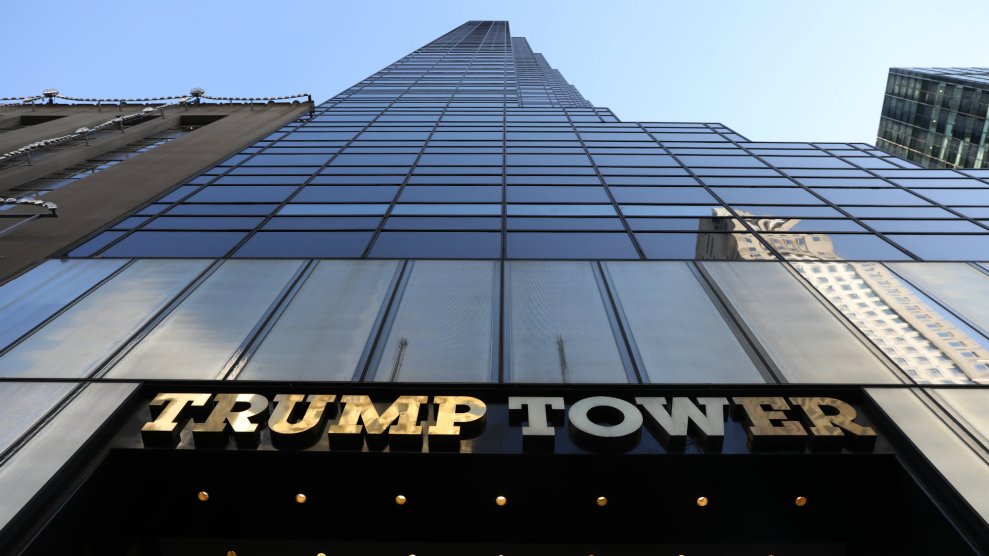 This story was originally published by The Guardian and is shared here as part of the Climate Desk collaboration.

Donald Trump’s reluctance to address climate change is set to cost his business empire millions of dollars in fines levied by New York City due to the amount of pollution emitted by Trump-owned buildings.

According to data shared with the The Guardian, eight Trump properties in New York City do not comply with new regulations designed to slash greenhouse gas emissions. This means the Trump Organization is on track to be hit with fines of $2.1m every year from 2030, unless its buildings are made more environmentally friendly.

According to city officials, the president’s eight largest New York properties pump out around 27,000 tons of planet-warming gases every ear, the equivalent of 5,800 cars. The buildings that exceed the new pollution thresholds include Trump Tower on Fifth Avenue, and the Trump Building on Wall Street.

The biggest potential offender is Trump International Hotel & Tower, a 583ft skyscraper that looms over the south-west corner of Central Park. The building is on course to be fined $850,871 a year if no improvements are made to its energy efficiency.

The New York mayor, Bill de Blasio, will hold a rally outside Trump Tower on Monday, seeking to highlight the looming penalties.

“President Trump, you’re on notice,” de Blasio said. “Your polluting buildings are part of the problem. Cut your emissions or pay the price.”

The fines are part of legislation passed by the city council in April that seeks to cut planet-warming emissions from the city’s largest buildings. All premises larger than 25,000 feet—a total of 50,000 buildings—will be required to cut overall emissions 40percent or face annual fines.

The new standards, hailed by advocates as the toughest action by any city on climate change so far, takes aim at the biggest source of greenhouse gases in New York, where buildings account for more than two-thirds of emissions.

Trump’s properties have long been identified as leading consumers of energy, although city officials say some other buildings are on track for even heavier fines.

In order to comply with the new regulations, the Trump properties must improve insulation, upgrade window glass, replace boilers and better automate electricity use.

“The good performers won’t have to pay any penalties but anything above the threshold has a lot of work to do now,” said Mark Chambers, director of the mayor’s office of sustainability. “It’s clear the president needs to pay attention to this, it’s a lot of money.

“We will do what’s necessary to combat the climate crisis. It’s important we are all held responsible and President Trump is the No 1 roadblock globally to us responding to climate change.”

New York has positioned itself as a bulwark against Trump administration attempts to dismantle action to address climate change. The city has vowed to divest its pension funds of fossil fuel investments and attempted to sue major oil companies for their role in the climate crisis. De Blasio has set a target of cutting greenhouse gas emissions 80percent below 2005 levels by 2050.

The new regulations on large buildings echo a central plank of the Green New Deal, a federal plan put forward by the New York congresswoman Alexandria Ocasio-Cortez that calls for retrofitting all buildings for energy efficiency within 10 years.

New York’s new climate regulations have been opposed by some developers who complain it will hamper the construction of large, dense buildings and deter energy-hungry tenants such as media and technology companies.

The Trump Organization did not respond to a request for comment.

According to the International Energy Agency, the construction and operation of buildings is responsible for more than a third of global energy consumption.

Last year, a major United Nations report warned that the world must make an “unprecedented” effort to cut emissions by 45 percent by 2030 and then effectively to zero by 2050 to avoid the worst ravages of climate change, including severe heatwaves, flooding, ruinous storms and food insecurity.