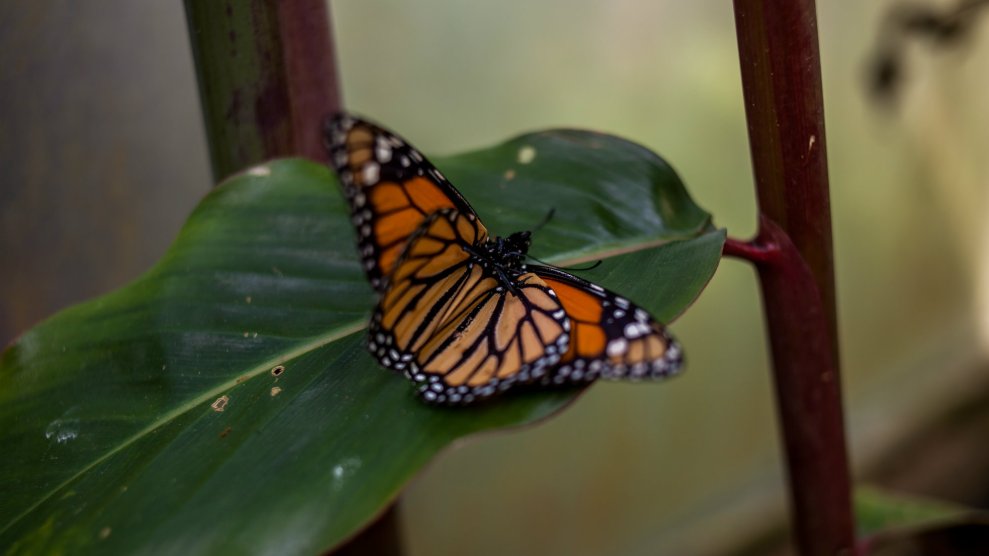 One of the exhibits on view at the Cooper Hewitt Design Triennial, which just opened at the Smithsonian’s design museum in New York, is a full-scale section of an architectural facade. For butterflies.

Designed by the Brooklyn-based architecture and design research group Terreform One, this is a piece of a larger Monarch Sanctuary, representing a “vertical meadow” that could envelope a building. “It has a double-skin system, where the central inner space is a sanctuary to allow monarchs to procreate and re-wild local surroundings,” said Mitchell Joachim, director and co-founder of Terreform One. This cavity contains milkweed vines and flowering plants to feed the butterflies at all stages of their life cycle. A special mortar mixture forms the lattice-like design of the habitat, which includes alternative materials to replace some of the Portland cement for a smaller carbon footprint.

In June, the US Fish and Wildlife Service is expected to make a decision on whether the monarch butterfly (Danaus plexippus) will be protected under the Endangered Species Act. Over recent years, the butterflies, distinctive for their black-and-orange wings patterned as precisely as stained glass, have decreased in number. In 2018, the National Wildlife Federation reported a nearly 15 percent decrease of eastern monarchs overwintering in Mexico from the previous year, while the Xerces Society for Invertebrate Conservation, a nonprofit which organizes annual counts, estimated a 97 percent decline of western monarchs overwintering in California compared to the 1980s.

From extreme weather events to warmer temperatures, the monarch faces an array of survival challenges, but habitat loss from pesticides and urban development is especially devastating. The insect needs milkweed for laying eggs and feeding caterpillars, and particularly in cities with limited green space, those vital plants can be sparse.

“Urban areas have great potential for pollinator habitat,” said Katie-Lyn Bunney, education coordinator for the Monarch Joint Venture, a national partnership of over 70 federal and state agencies, environmental groups, and universities. “Every stem adds up, so by planting even small gardens, urban areas can have great collective impact.” Recent research by Wayne Thogmartin of the United States Geological Survey (USGS) stated that reaching a goal of 1.3 billion stems of milkweed to support a stable population of Midwestern United States monarchs would require “all hands on deck” for plantings.

“Every stem adds up, so by planting even small gardens, urban areas can have great collective impact.”

Monarchs are the sole butterfly with a two-way migration, leaving the north when it gets cold and overwintering in warmer regions, then returning north in spring. As they make these tremendous journeys, sometimes thousands of miles, they need places with nectar to rest, so non-milkweed native flowers are also important.

“A lot of what’s existing green space [in cities] is just parkland—which could be converted into pollinator habitat,” noted Bunney. “But there’s also container gardening, green walls, and things like urban rooftop gardens. There’s a lot of potential for innovation and engagement.”

There are several city-focused groups and projects in the Monarch Joint Venture, including the Keller Science Action Center at Chicago’s Field Museum, which identifies prospective habitat along the central flyway in Chicago, and the Kansas City Native Plant Initiative. Some U.S. cities have spearheaded their own monarch actions. Milkweeds for Monarchs: The St. Louis Butterfly Project was launched by St. Louis Mayor Francis Slay in 2014.

Some of the first city-established gardens, planted with a mix of milkweed and nectar plants, were at firehouses and public parks. Later, the initiative expanded to schools, and around St. Louis, citizens planted monarch-friendly gardens in their own yards. In 2018, a St. Louis Riverfront Butterfly Byway with a 30-acre pollinator pathway opened on the Mississippi riverfront.

“We now have more than 400 monarch gardens that have been registered on the site, and a quick look at the map shows that people all across the city have embraced this project,” said Catherine Werner, the city’s sustainability director. The city’s original goal was 250 monarch gardens.

Part of the success came from community programming like the Great MonArch Migration Event in Gateway Arch National Park, and free seed packets and a “Monarch Garden in a Box” plant sale that made it accessible for people to join in. “The big difference I see between urban monarch gardens and ones in rural areas is the opportunity to provide connections to nature for people where they live, work, learn, play, or pray,” Werner said. “Monarch gardens don’t have to be large to be effective for the butterflies.”

In New York, Terreform One is working with a client to integrate its monarch-friendly facade system into a butterfly sanctuary on a commercial site in Nolita. “It’s an eight-story building that will have a skin that wraps around the front and goes to the top, where there’s a pollinator garden,” Joachim said. “The butterflies can use it as a way station, so that they can get a chance at making it in New York.” Terreform One worked with the chemical company BASF on the prototype—BASF has its own monarch-conservation program, which encourages farms and golf courses to plant milkweed on unused or out-of-play land. (Although there were early plans to display “Monarch Sanctuary” with living butterflies in the Cooper Hewitt’s conservatory, it will be presented without them.)

Whereas most urban buildings have no relationship with wildlife (except, unfortunately, with the birds that slam into their deceptively reflective windows), this project welcomes non-human species. “We came up with a kind of a slogan that doesn’t really belong to us—it belongs to anyone—which is ‘design against extinction,'” said Joachim. “And that’s the new credo that we’re working with to explain to other architects and planners that you have to design against extinction, not only for other species, but for ourselves.”

There has been some positive news for monarchs recently. Craig Wilson, director of the USDA Future Scientists Program and a senior research associate at Texas A&M University, stated in March that after years of decline, monarch numbers are up in Texas, with a flourishing supply of milkweed in Central Texas that’s being safeguarded by area communities. Due to the ongoing threats of climate change and habitat reduction around the country, the fate of the monarch remains precarious. Still, the popularity of saving the monarchs and creating urban green pockets for them contributes to the survival of all species in a city.

“Every time I do an event, I come across somebody who says, ‘Oh, I raised monarchs in second grade, or kindergarten,’ or ‘I remember having this tree full of butterflies one fall at my parents’ house,'” Bunney, of the Monarch Joint Venture, said. “People love them. And I think that’s a good thing…Because they love monarchs, they’re doing all of these things that help other organisms—other butterflies and bees and birds—and that spirals into this really fantastic conservation mindset.”