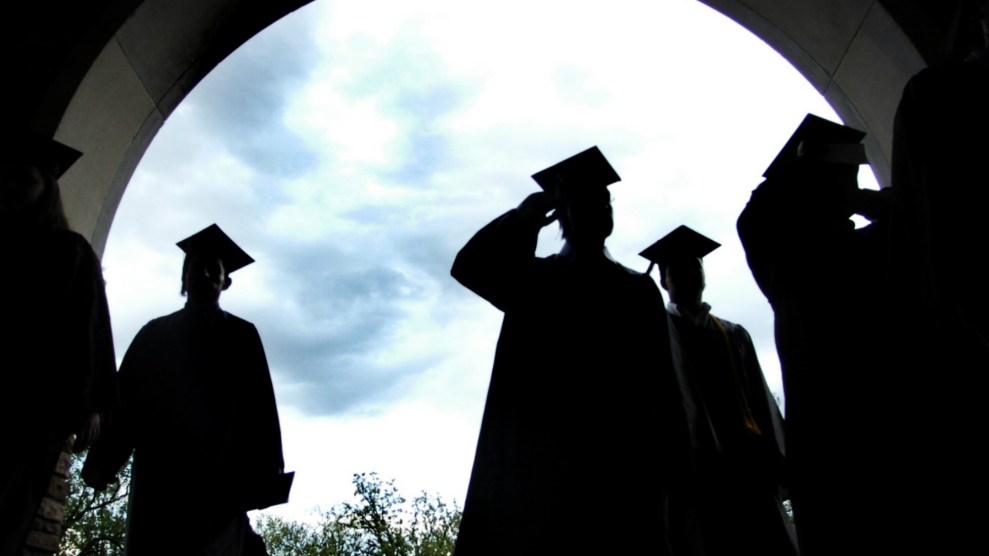 Schools and colleges across the US have been accused of censoring students who have attempted to use their graduation speeches to speak out on the unfolding climate crisis.

A youth-led movement called Class of 0000 is encouraging students to read out a prepared text at their graduation ceremonies that warns of “catastrophic climate change” and tells elected leaders to “have plan to get to zero emissions, or get zero of our votes.”

More than 350 students set to speak at ceremonies as valedictorians, or in other roles, have pledged to read the message, but many have complained that educational authorities have barred them from doing so as the global climate emergency is deemed too political to mention.

In the US education system, a valedictorian is typically a student with the highest academic performance in the class. This student delivers a farewell speech for the class at its graduation.

Emily Shal, an 18-year-old senior, was told by her school that the climate message was “too controversial” for her graduation speech as class president. Shal read the speech at a talent show before the graduation ceremony and said she still received backlash from school authorities.

“The administration were very mad, they were pissed,” said Shal, who attends Whittier Tech high school in Haverhill, Massachusetts. “Everyone was telling me I was in trouble. They now consider me rogue and rebellious. I was really worried about repercussions.”

“Everyone was telling me I was in trouble. They now consider me rogue and rebellious. I was really worried about repercussions.”

Worried that she would be dragged off stage if she made the climate speech, Shal decided to apologize and comply with the demand not to mention climate change at the ceremony last week. She said a large majority of her classmates consider climate a “huge topic” that needs to be addressed.

“The school thinks it is a political issue that shouldn’t be brought up,” she said. “My freedom of speech was definitely taken away. We are tearing down our home, the Earth, and it should be our No 1 concern in the world. But it’s not.”

Jessica Lopez, another 18-year-old senior, was told by the principal of Health Sciences high and middle college in San Diego that she shouldn’t mention climate change as it’s political and instead “should be celebrating our achievements” in a more traditional graduation speech.

Lopez said she was surprised as her school is “friendly and innovative” and previously allowed students to take part in a walkout to protest school shootings.

“It’s shocking to me that we could voice our opinions then, but are silenced when we want to talk about climate change,” she said. “I was very upset and felt like I didn’t want to go up there and be a hypocrite. It’s created a lot of tension between the class and the administration.”

In lieu of her planned speech, Lopez and most of her class plan to don badges that say “No Planet B” for the ceremony.

“A lot of adults blame our generation for being sensitive but we have to deal with the problems they have caused,” Lopez said. “It’s really frustrating. We are vocal about climate change because no one else is going to do anything about it. On this issue, it feels like the adults are the children.”

In other incidents, two students at Albany high school in California were told to drop mentions of climate change with one, Tamara Valenzuela, using social media to attack the decision. A separate student, Saisantosh Tiruchinapalli from Arizona, was told he could mention the importance of voting but not climate change.

The climate crisis has become a deeply polarized issue in the US, to the point that recent polling shows it divides voters even more than issues such as abortion and gun control.

A growing youth climate moment has sought to break the political deadlock in the wake of a series of dire warnings from scientists over the flooding, wildfires, drought and societal unrest that global heating is spurring.

Many of the US students planning to speak out say they were inspired by Greta Thunberg, a Swedish teenager who inspired an international wave of school strikes over the climate crisis.

Meanwhile, the Sunrise Movement, one of the US groups that helped organize the Class of 0000 initiative, has been driven by youth activists and has been at the forefront of championing the Green New Deal, a plan to rapidly decarbonize the US economy.