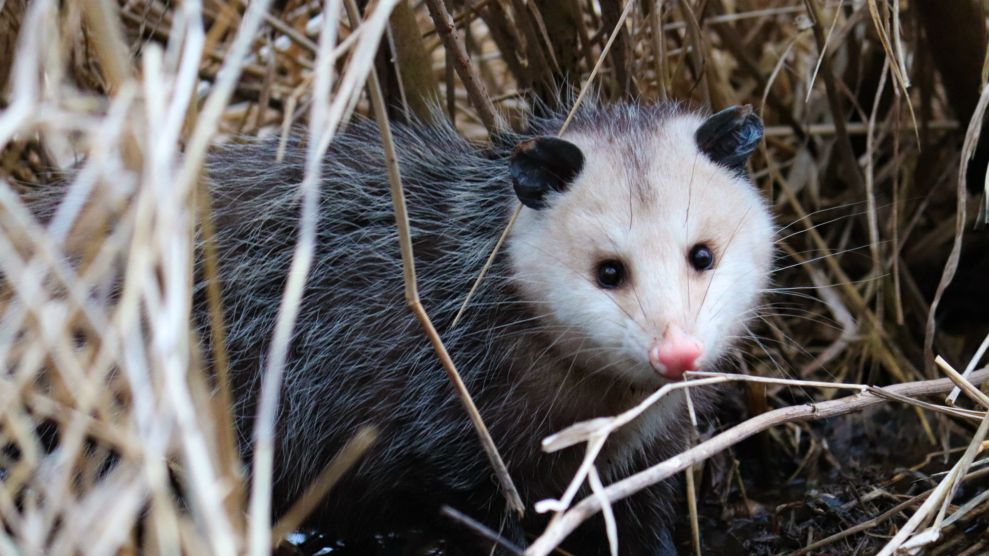 How cute is this little angel?Shutterstock

In the marsupial family, the opossum really got the short end of the stick: While their Australian cousins, including kangaroos, koalas, and wombats, are adored by the masses, opossums are outcasts. They’re the United States’ only native marsupial, but they’re virtually nobody’s favorite animal. They aren’t the star exhibit at any zoo. You almost certainly won’t see them on the cover of any wildlife magazine. No one has ever squealed, “Trash panda!,” after spotting one digging through a garbage bin, as so many people (somehow) lovingly do with raccoons.

We can’t even get their name right—opossum (pronounced uh-possum), not possum. And yet! Opossums are heroes of the animal world.

No one has ever squealed, “Trash panda!,” after spotting an opossum digging through a garbage bin.

Sure, they’re ugly. They’ve got beady eyes, a hairless tail, and dozens of pointed teeth. When Captain John Smith came to America in the 17th century, he wrote that opossums have a head “like a Swine,” a tail “like a Rat,” and are about the size of a cat, which I must admit, is pretty spot-on. But opossums do more for us than we recognize. “Just because they’re ugly doesn’t mean that they’re not important and worthy of protecting,” David Mizejewski, a naturalist at the National Wildlife Federation and author of the book Attracting Birds, Butterflies, and Other Backyard Wildlife, tells Mother Jones. “If you just open your mind a little bit, you can see them as beautiful creatures.”

In fact, opossums protect humans by eating ticks, dead animals, and venomous snakes. As nature’s trash collectors, they play a vital role in the ecosystem, all while protecting humans from disease. A 2009 study published in the journal Proceedings of the Royal Society B: Biological Sciences found that opossums are exquisitely good at removing ticks, which can carry Lyme disease, from their bodies and gobble up an estimated 5,000 ticks per season that may otherwise latch onto humans.

“Despite, again, their appearance and stereotype, they’re not filthy animals,” says Mizejewski. “In fact, they’re fastidious groomers.” And the ticks make “nice little protein packets” for the opossum to eat, he says.

Aside from their impressive tick-consuming ability, opossums boast another superpower: resistance to snake venom. A study published in 2016 found that a molecule in opossum blood was able to “completely neutralize” the venom of the Western Diamondback Rattlesnake before being injected into mice. The study went like this: One set of eight unlucky mice was given a lethal dose of venom. They all died. Then, another set of mice was given the same lethal dose of venom mixed with the opossum-derived molecule. Remarkably, “[n]one of these eight mice died or showed any symptoms of envenomation,” the study’s authors write. While scientists have known for decades that opossums can survive a snake bite, the research may contribute to developing an anti-venom that will help treat the more than 5 million snakebites that happen worldwide every year.

“If you just open your mind a little bit, you can see them as beautiful creatures.”

Opossums also pose little physical threat to humans. They’re typically non-confrontational and are effectively immune to rabies, likely due to their low body temperature. And unlike raccoons and skunks, which may attack or spray, respectively, if cornered, one of the opossum’s primary defenses is to feign death (hence the saying “play opossum”) and emit a green, nasty-smelling liquid from its anal glands. Meanwhile, those raccoons people love so much can be deadly. According to data from the Centers for Disease Control and Prevention, between 1999 and 2007, cats, cows, horses, pigs, raccoons, and “other hoofed livestock” altogether caused 655 deaths as a direct result of animal interaction.

Still, “you should never try to pick [an opossum] up or touch or handle or get close enough to any wild animal because you do risk getting bitten,” warns Mizejewski. “Opossums will bite sometimes, but their natural tendency is to employ other methods of avoiding potential threats.”

If all this wasn’t enough evidence for you that the opossum deserves an award for its service to humanity, know that opossums are also some of the animal kingdom’s most devoted mothers. Not only do they typically nurse between four and seven babies at a time, but they also carry the babies first within a pouch on their bellies and then on their backs until they are old enough to fend for themselves. And although adult opossums may not be blessed with pulchritude, baby opossums are adorable.

A small, but growing community of opossum fans has spawned online: An opossum named Starfish has more than 130k followers on Instagram; a Twitter account with 45k followers posts nothing but opossum memes, dubbing itself a “possum hatred free zone”; and you can even buy opossum-themed merchandise on Etsy, including a shirt that says, “Real men love opossums.”

“Anytime people are celebrating wildlife, especially wildlife that tends to have a negative stereotype associated with them, I think is a good thing,” says Mizejewski. But he doesn’t recommend keeping them as pets: “Keeping animals in captivity really should be left to wildlife professionals at professional zoological institutions with the proper enclosures and enrichment and care, diet, all that stuff that goes along with it.”

If you want to support opossums from a distance, Mizejewski recommends maintaining your yard naturally with native plants to provide habitat for them and other beneficial critters. With an average lifespan of a year or two, opossums are only on this planet for a short time. Let’s show them some love.