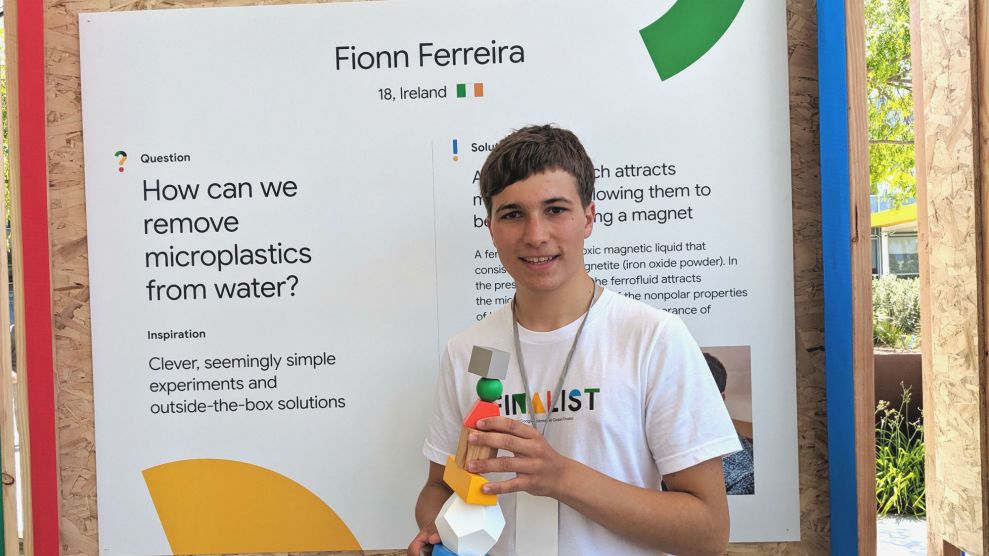 On Monday, Fionn Ferreira, an 18-year-old from Ireland, took home the top prize—which includes, in addition to a lifetime of bragging rights, a $50,000 educational scholarship—at the Google Science Fair for his project on microplastic pollution.

Microplastics are plastic fragments less than 5 millimeters in size and they pose serious environmental and a public health risks. They are ubiquitous, having contaminated the most remote places of the world, including France’s Pyrenees mountains and the bottom of the Mariana Trench; they can be found in tap water and inside marine mammals and fish. While it’s not yet clear how microplastics affect human health, it’s safe to say they are of great concern to scientists.

Enter Ferreira, who speaks three languages, plays the trumpet, and has a dwarf planet named after him. Living near the water in West Cork, he was inspired to study microplastics after becoming “increasingly aware” of plastic ocean pollution. “I was alarmed to find out how many microplastics enter our wastewater system and consequently the oceans,” he writes in his project’s research paper. “This inspired me to try and find out a way to try and remove microplastics from waters before they even reached the sea.”

More than 100 miles from the nearest lab, he conducted all of his research at his home, fueled by hot chocolates from his parents. After running more than 1,000 tests (and starting an accidental fire), he figured out a way to remove about 87 percent of microplastic from water by using a magnetic liquid, or ferrofluid. The challenge now, he says, is to bring the project to scale.

Scientists congratulated Ferreira on Twitter, including YouTuber Dianna Cowern (also known as Physics Girl) and Mae Jemison, the first woman of color to travel in space, who wrote, “Channeling creativity and curiosity into ingenuity can change the world.”

I chatted with Ferreira this week via Skype about his inspiration for the project, dismantling his parent’s washing machine, his take on moving to Mars, and how, maybe, we shouldn’t just rely on kids to save the planet.

Of all areas of research to choose from, why did you choose to focus on microplastics?

So once you recognized the problem, how did you go about trying to solve it?

I found a method using ferrofluid with non-toxic iron oxide powder to remove microplastics from water. I think ferrofluid is one of the coolest liquids in the world. It’s a magnetic liquid. It makes really cool shapes when you bring magnets close to it. Currently, there’s no method to remove microplastics from water. So I kind of thought my project was unique.

“Currently, there’s no method to remove microplastics from water. So I kind of thought my project was unique.”

I think you’re not the only one who thought it was unique. How did you come up with the idea to combine oil and magnetite?

I found a stone at our seashore—we had a recent oil spill—and found little bits of plastic stuck in it. And this got me thinking, why is this happening? It turns out, oil and bits of plastic both have the same polarity [a physical property that determines if a substance can be dissolved by or attract another]. In chemistry, like attracts like, which means non-polar things attract non-polar things.

I first just added some vegetable oil to a sample containing plastics, and the plastics stuck in the vegetable oil. Then I thought, maybe I could further this slightly because I wanted to include a really cool part of chemistry. I thought, how can I remove this oil from water? And that’s how I thought of maybe adding magnetized powder and making this into a ferrofluid, something that I have worked with in school.

You made a great video of the extraction process. Can you explain what’s going on in it?

Essentially, what’s happening is that I’ve got some water containing microplastics. I add oil and magnetite powder. These form a ferrofluid, and then plastics are attracted by this. All I need to do is bring a magnet close to it and it will remove both the plastic and ferrofluids.

What did your parents think about you doing all this research at home?

I’m not really sure. I did take apart our washing machine [to collect microplastics] a couple of times. And, you know, things caught fire. I don’t know if they were too happy. They made me hot chocolates too, so there were definitely pros to it.

It also meant that for this project, I had to build all of my own equipment, from building a spectrometer to a microscope. And in addition to building it, I then had to use it for testing. So I think there were pros and cons. One of the pros was, I could [work on the project] whenever. Because I live about 200 kilometers [124 miles] away from the nearest lab, at home was the only place I could do it.

Did you feel like you’re cleaning up someone else’s mess because the microplastics have been left in large part by previous generations?

No. I think everybody, all humans, are responsible for this mess of microplastics. I don’t think we can blame one person for it. I’m sure that just in my life, I’ve given out lots of microplastics too, everything from driving my car, well, I don’t have a car, but my parents driving me around, and even washing my clothes. I think everybody is responsible. And I think that if I’ve found a method like this, why not use it? And why not put it to a greater good?

I read on your website that you also have an interest in space. Is that right?

Yes. I actually run a planetarium on the side, and I do planetarium shows. I have a dwarf planet named after me.

For someone with a fascination with space, why is it important to you to save this planet, rather than focusing on going to live on another one, like Mars?

I think it takes quite a long time to get to Mars. And I think it’s not viable to bring everybody on Earth to Mars. I’m not sure if I would like to go to Mars myself, I’d have to think about it first. But because of that, I think we should clean up our planet because I think we’ll be stuck here for quite a while longer. And I like our planet. Our planet’s pretty unique. I’ve looked at lots of planets in our solar system, and farther away, and I think our planet’s unique. I think that we should mind our own planet and we should take care of it.

When I see stories about young people doing innovative things, Greta Thunberg, for example, I always see people say, “Oh, thank goodness. The kids are going to save us.” As someone who might be the recipient of that kind of mentality, what do you think of that?

Well, I think that everybody here on Earth has a role to play. I think if we can save [the Earth], which I think we can, everybody needs to take part. And I don’t think it’s just the job of young people or just a job for old people; I think everybody should be engaged. Older people might have more influence and more power. And the same goes for young people too.

What’s next for you?

Well, for me anyway, next is going to university. I’m going to go to the University of Groningen in the Netherlands in August and I’m going to be studying chemistry. I think there are other projects which I can do, similar to this one, but I just have to learn a bit more chemistry.

Did you ever consider going to an American university?

I did for a while consider going to an American university. But it’s not really viable and not eco-friendly to travel 9,000 kilometers to go to university. And so because of that, I dismissed it quite early on. And I actually did receive a scholarship for the University of Arizona at one point, which I decided not to take because I like living in Europe. There is so much good legislation here around climate change and the environment, I wanted to stay at home.