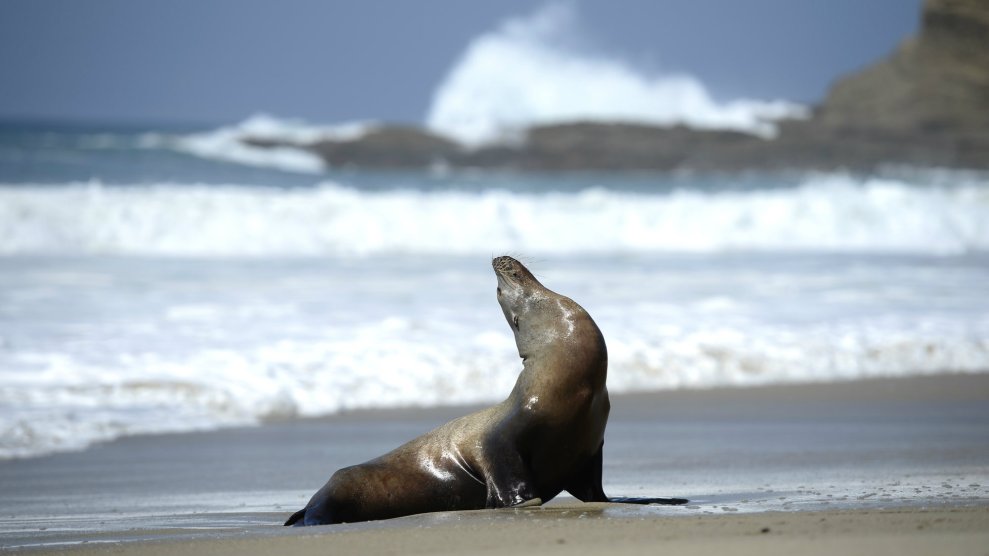 With the lights of Moss Landing, California, twinkling in the distance, Captain Porter McHenry stood on the top deck of the Merva W, a large commercial fishing boat. Ocean water sprayed his face and dampened his thick brown beard. A third-generation fishers, McHenry employs a crew of three. In the dead of the night, his yellow rain jacket was briefly illuminated as he ignited the long wick of an orange firecracker and chucked it over the side of the boat into the waves.

Seconds later, a bright flash and boom broke the sea of darkness.

The 3-inch explosives, known in the fishing world as “seal bombs,” create a blast comparable to that of a small stick of dynamite. West Coast fishers from California to Alaska use them to scare away seals and sea lions trying to steal their catch, including squid, anchovies and salmon. Once thrown overboard, the bombs detonate below the water’s surface, producing a noise that can travel for over 40 miles underwater. “Sometimes you can throw a bunch of ’em, and sea lions will stay away for a couple minutes,” said McHenry, “and you’re able to catch.”

McHenry’s bomb forced a school of anchovies to crowd together. The fishers cast a net, which unfurled across the water like a blanket.

But a nearby pack of 30 hungry, burly sea lions was only momentarily deterred.

The animals thronged the bulging net, some plunging in and out to sneak extra mouthfuls of fish. The fishers start to haul in the more than 10 tons of anchovies in the net. One sea lion swam back in and thrashed around wildly before diving back into the waves.

This unabashed thievery has left fishers feeling frustrated, forced to use a deterrent that doesn’t seem to work. Interviews with fishers and marine biologists and a review of studies reveal that seal bombs are unsuccessful at scaring sea lions away from fishing nets. And the National Oceanic and Atmospheric Administration, the federal agency in charge of handling nuisance sea lions, knows that seal bombs are ineffective. Yet the agency continues to enforce its policy against lethal deterrents, leaving fishers with few options other than to illegally kill sea lions or watch the animals gobble up their valuable catch.

“This is our livelihood. This is what we do to pay our bills and help our families,” said commercial fisher Clark Walker, who works on McHenry’s boat. “If they leave us with no resources, we’re screwed.”

Before the seal bombs became the go-to method for dealing with sea lions, West Coast fishers used shotguns. Until the late 1950s, fishers freely shot at sea lions encroaching on their boats. Oregon even paid people to track down and kill the animals for $10 per carcass. But when the species’ population plummeted to the verge of collapse in the 1960s, conservationists stepped in.

The Switzerland-based International Union for Conservation of Nature, a global authority on species conservation, listed California sea lions as very rare. This listing helped motivate President Richard Nixon to sign the Marine Mammal Protection Act into law in 1972, making it illegal to hurt, harass or injure any marine mammals. As a result, the sea lion population tripled from just under 90,000 in 1975 to over 270,000 in 2008, and the animals did not have to be listed under the Endangered Species Act. This was a conservation success, but the sea lion resurgence has since become a huge nuisance for West Coast and Alaska fishers, who lose money with every mouthful the animals take from their catch.

And the monetary impacts extend beyond the lost fish. “Not only do they eat the catch out of the net, but they do significant harm to the net, which is pretty expensive,” said Kathy Hansen, a commercial fisherwoman and director of the Southeast Alaska Fishermen’s Alliance, a nonprofit commercial fishing organization. Hungry sea lions are also known to chase boats, and fishers spend more money on fuel fleeing from them.

Watching this is “like beating your head into a wall,” said Rudy Zeiss, a fourth-generation commercial fishers from Santa Cruz.

Since the 1970s, fishers have employed non-lethal deterrents. Seal bombs, which are regulated by the Bureau of Alcohol, Tobacco, Firearms and Explosives, became the popular choice. They are portable, easy to ignite and have the added benefit of creating a pressure wave that forces fish together while briefly spooking sea lions. Fishers set off as many as 37,500 seal bombs per month in Southern California from 2005 to 2016, according to a study done by the Scripps Acoustic Ecology Laboratory. In 2009, researchers recorded over 3,000 explosions in a single night at one fishing site.

But there is growing concern over whether the bombs pose a significant risk to other marine life, both directly, by hitting animals, and indirectly, by blasting loud noises, researchers say. The noise ripples out into a marine ecosystem filled with animals that rely on underwater sounds to find their next meal.

What’s more, research across the West Coast indicates that these explosions are only somewhat effective in fending off sea lions.

Two studies in 1987 revealed that sea lions were only deterred for an average of roughly four minutes. These findings were replicated in a report by NOAA and the Pacific States Marine Fisheries Commission, which examined the use of seal bombs in rivers and bays in Oregon, Washington and California from 1997 to 2008. They found that the explosives were ineffective in stopping sea lions from preying on fishery catches.

“These are animals that are about eating food, reproducing and resting,” said Robert Anderson, the marine mammal program manager at NOAA. “Those things are extremely hard-wired and hard to break.”

Researchers hypothesize that seal bombs may even act as a dinner bell by luring sea lions towards a fresh meal. Between the seal bombs and blaring lights that fishers use, hungry sea lions are easily tipped off to where they can find free food.

Despite this, many fishers still think the bombs are better than nothing. Former Alaska Trollers Association Director Dale Kelley said that seal bombs “provide the singular most effective and legal non-lethal means to deter sea lions from vessels and catch.” And, according to Rudy Zeiss, the explosives give commercial fishers like him “some type of chance to make a living here. Honestly, they may not do much, but even the peace of mind thinking that it’s doing something helps. It helps everything, it helps morale.”

Finally, in 2018, NOAA abandoned non-lethal methods and permitted the use of lethal force in Oregon. Specifically, officials allowed the Oregon Department of Fish and Wildlife to start euthanizing sea lions in the Willamette River, where sea lions are harming the local salmon population. Instead of staying in their natural ocean habitat, California sea lions have traveled upriver to Willamette Falls, where salmon pass through every year on their journey to spawn. According to more than a decade of data, the number of sea lions at the waterfall has increased from 27 per day in 2014 to at least 40 per day in 2017. “None of us got into the type of work that we’re in to do something like a lethal removal program, but you kinda end up there,” said Anderson, who is managing the program.

But for commercial fishers out in the open ocean, NOAA has no solution. According to John Ewald, director of public affairs, NOAA is developing “specific measures for deterring Endangered Species Act-listed marine mammals.” However, “through this effort, we are not evaluating effectiveness of deterrents, nor are we developing deterrent methods or technologies.”

NOAA’s own 11-year report on the use of seal bombs in Oregon, Washington and California shows that non-lethal deterrents aren’t working, yet allowing a lethal removal program in the open ocean would require passing new laws in favor of culling a once seriously threatened species in its natural environment. This conflicts with the agency’s mission to be stewards “of the nation’s ocean resources and their habitat.”

So, rather than develop new tools, NOAA is doubling down, focusing its efforts on teaching fishers how to use seal bombs and other non-lethal deterrents properly. But with no new and more effective deterrent in sight, fishers are left with a growing sense of frustration and few other options. A National Geographic report last year found that West Coast fishers are now illegally using shotguns; between 1998 and 2018, around 700 sea lions were found with gunshot or stab wounds.

There is “no way other than shooting them,” says fisher Clay Eldredge, who is based out of Half Moon Bay in California. “But you go to prison.” The penalty for killing a sea lion can be a year in prison and a fine of up to $28,520. However, without eyewitness accounts, video evidence, or confessions, tracking down perpetrators is close to impossible. Since 2003, just five fishers in California have been convicted.

“It’s the last option for the fishermen,” says Eldredge. “It’s all we’ve got.”