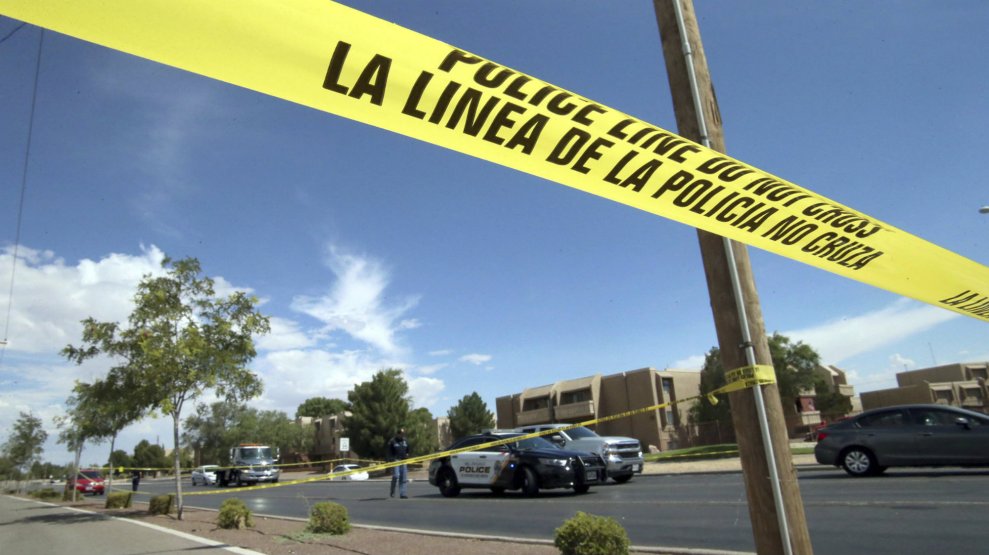 A manifesto posted online shortly before Saturday’s massacre at a Walmart in El Paso that the suspected shooter may have written blamed immigrants for hastening the environmental destruction of the United States and proposed genocide as a pathway to ecological sustainability.

Filled with white nationalist diatribes against “race-mixing” and the “Hispanic invasion of Texas,” the manifesto highlights far-right extremists’ budding revival of eco-fascism.

Titled “The Inconvenient Truth,” an allusion to Al Gore’s landmark climate change documentary, the ranting four-page document appeared on the extremist forum 8chan shortly before the shooting. Authorities have yet to confirm whether Patrick Crusius, the 21-year-old Dallas-area white man arrested in connection with the shooting that left at least 22 dead, is the author.

“The environment is getting worse by the year,” the manifesto reads. “Most of y’all are just too stubborn to change your lifestyle. So the next logical step is to decrease the number of people in America using resources. If we can get rid of enough people, then our way of life can become more sustainable.”

HuffPost reviewed the document but, with consideration to the ethical concerns of broadcasting what might be a notoriety-seeking killer’s messaging, is not publishing a link to it.

The manifesto explicitly cites the 74-page message posted online by the gunman charged with killing 51 worshippers at two mosques in Christchurch, New Zealand, in March. That alleged shooter, Brenton Tarrant, a 28-year-old white Australian, thrice described himself as an “eco-fascist” motivated to repel waves of migrants fleeing climate change-ravaged regions of the world.

For years now, denial served as the extreme right’s de facto position on climate change. That is starting to change.

Just look, as Dissent magazine did in May, at this spring’s European elections. Following the European Green Party’s historic gains, the far-right Alternative for Germany’s youth wing in Berlin urged party leaders to abandon the “difficult to understand statement that mankind does not influence the climate,” an issue that moves “more people than we thought.”

In France, the far-right National Rally already took the message to heart. The party, led by Marine Le Pen, vowed to remake Europe as “the world’s first ecological civilization” with a climate platform rooted in nationalism. Le Pen railed against “nomadic” people who “do not care about the environment” as “they have no homeland,” harkening to the Nazis’ “blood and soil” slogan that, as The Guardian put it, described a belief in a mystical connection between race and a particular territory. Under that logic, “borders are the environment’s greatest ally,” as a National Rally party spokesman said in April.

In the United States, 70 percent of Americans recognize the climate is warming, and 57 percent understand humans’ emissions are the cause, Yale Program on Climate Change Communication polling shows. Republicans, long the only major political party in the developed world to outright reject climate science, are inching away from denialism but have yet to rally around a popular policy proposal.

“Some day Republicans are going to have to come up with some proposals that are responsive to these issues and, frankly, be more reasonable and more thoughtful,” Scott Jennings, a Republican consultant and a former campaign adviser to Senate Majority Leader Mitch McConnell (R-Ky.), told The New York Times last week.

More than 65 million people are displaced worldwide right now, marking—depending on how you count it—the highest number of refugees in history. Climate change is forecast to inflame the crisis. Catastrophic weather forced 24 million people to flee home per year since 2008, according to the Internal Displacement Monitoring Centre, the Swiss-based international organization. By 2050, that number could hit anywhere from 140 million to 300 million to 1 billion. Drought, rising seas and violent storms could compel upward of 143 million people to leave sub-Saharan Africa, South Asia and Latin America alone by the middle of the century, the World Bank estimated last year.

Slashing global greenhouse gases and increasing aid to help poor countries close to the equator adapt is the obvious way to change that trajectory. The Green New Deal framework left-wing climate activists put forward late last year gained international popularity in part because its promise of good-paying jobs and meaningful work as a vehicle for wealth redistribution and ecological stability offers a powerful antidote to the toxic elixir of far-right prescriptions to social unrest.

But as planet-heating emissions continue surging and scientists’ projections grow more dire, eco-fascism is experiencing a revival in a subculture of far-right extremism online. It comes amid a rekindled interest in Ted Kaczynski, the convicted terrorist known as the Unabomber.

Kaczynski—like his newfound online fandom, who often distinguish themselves with pine-tree emoji on social media—subscribes to “lifeboat ethics.” The term, coined in the 1970s by the neoconservative ecologist Garrett Hardin, denotes the idea that “traditional humanitarian views of the ‘guilt-ridden,’ ‘conscience-stricken’ liberal” threatens the balance of nature. The belief traces its lineage back to 18th-century English philosopher Thomas Malthus, who theorized that population growth would eclipse the availability of resources to meet basic human needs without moral restraint or widespread disease, famine or war to thin the herd.

In September 2017, the white nationalist magazine American Renaissance asked its readers a question: “What does it mean for whites if climate change is real?” The bombastic essay wondered whether the “population explosion in the global south combined with climate change” demonstrated “the single greatest external threat to Western civilization”—even “more serious than Islamic terrorism or Hispanic illegal immigration.”

“If continued global change makes the poor, non-white parts of the world even more unpleasant to live in than they are now, it will certainly drive more non-whites north,” Jared Taylor, the publication’s editor and an influential white nationalist, wrote in an email to the magazine Jewish Currents. “I make no apology for…urging white nations to muster the will to guard their borders and maintain white majorities.”