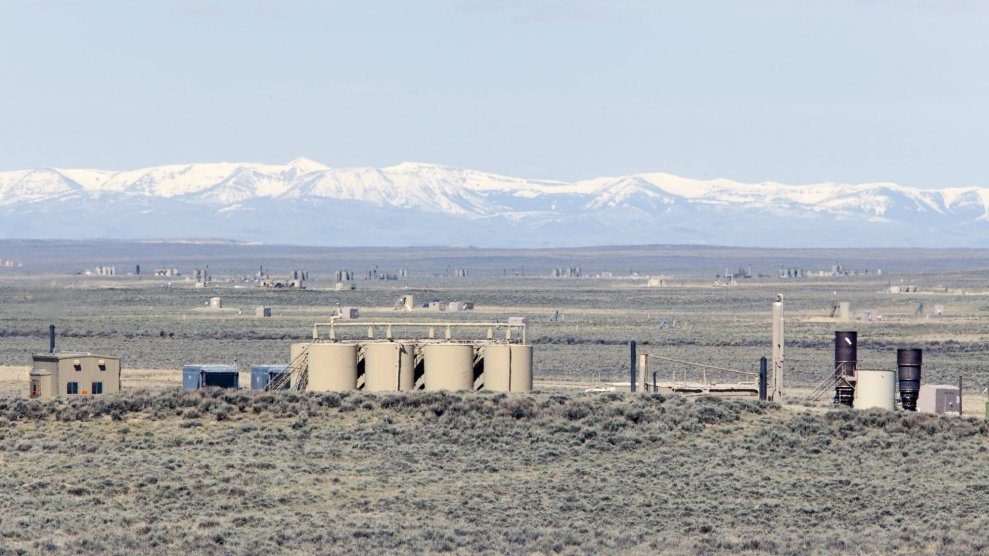 Gas wells and facilities spread out across the landscape at Jonah Energy field, on May 4, 2018 outside Pinedale, Wyoming.Melanie Stetson Freeman/The Christian Science Monitor/Getty

In 2018, record-setting federal oil and gas lease sales in the booming Permian Basin helped pump more than $600 million into New Mexico’s state coffers. With that cash burning a hole in its pockets, New Mexico upped education spending by nearly half a billion dollars the following year.

Even as New Mexico’s oil and gas economy booms, Wyoming’s once-vital mineral economy is convulsing, as demand for coal wanes and operators consolidate and go bankrupt—leaving counties owed tens of millions of dollars and hundreds out of work. So it goes for Western states riding the boom-and-bust cycles of mineral dependence.

But this fossil-fueled rollercoaster ride could come to a shuddering halt under recent climate action proposals. Several Democratic presidential hopefuls propose to end new federal fossil fuel leasing and phase out drilling on public lands. While any such moves would be met with legal challenges from the fossil fuel industry and energy-dependent states, recent federal court decisions show a way for federal agencies to deny development based on the public’s long-term interest.

Leasing moratoriums and drilling restrictions would send shockwaves around the West and require a massive restructuring of local, state and national programs. But with states and utility companies setting ambitious emission-reduction goals, and climate scientists issuing dire warnings about the rapidly closing window to avert even grimmer scenarios, states that aren’t preparing for the changing energy economy could be left behind in the shift from fossil fuels to renewables.

More than half of Wyoming’s annual revenue comes from fossil fuel extraction. This robust cash flow has enabled the state to forgo income or corporate taxes despite having low property taxes and a sales tax rate so low that job growth in industries other than extraction actually costs the state. When times are good, this tax structure has allowed Wyoming to keep living costs low and attract businesses while pouring money into services like education—it has long paid teachers far better than its neighbors—and infrastructure.

With its angled metal roofs, floor-to-ceiling windows, water slide, lazy river and rock-climbing wall, the Pinedale Aquatic Center in Pinedale, Wyoming, would be at home in any upscale Western suburb. But this is no swanky suburb; Pinedale, a town of about 2,000, was at the epicenter of a natural gas boom in the early 2000s. With tens of millions of dollars flowing into Sublette County, the county put $17 million into the facility in Pinedale, its county seat, while also making local teachers the highest-paid in the state.

Now, it’s getting harder and harder to keep the recreation center up and running. Over the last five years, shrinking oil and gas revenues have siphoned more than a million dollars from the facility’s annual budget, resulting in staff cuts and an end to free passes for senior citizens.

And the current pangs aren’t confined to recreation centers and budgets for government programs, which face ongoing cuts and calls for privatization. Wyoming lags behind other Western states in terms of personal income growth, higher education attainment, and employment in high-value sectors like manufacturing.

To a large extent, those lagging economic indicators can be traced to fossil fuel reliance. A recent Headwaters Economics report states the problem: “Wyoming’s decision to be dependent on energy commodity taxes has caused an economic and political ‘mineral tax trap’ wherein a political culture and commitment has developed around protecting the self-interest of low taxes and the status quo.” That commitment to coal was in full force this March, when Wyoming passed a law making it harder for utilities to decommission unprofitable coal-fired power plants.

Over the last few years, Wyoming has studied ways to diversify its economy. Some of those ideas could capitalize on climate action: The Economically Needed Diversity Options for Wyoming (ENDOW) initiative, started by then-Gov. Matt Mead in 2016, cited a tenfold increase in wind generation as one way to improve the state’s economy in the next 20 years. Increased wind development could utilize public land in the state and pair well with any federal climate action plans. A Bureau of Land Management report found that more than 14.5 million acres of federal lands in the state are suitable for wind development.

Still, public-lands wind development won’t generate the same kind of royalties as fossil fuel extraction anytime soon. And Wyoming lags behind other states in taxing wind power; while it collects over $500 million in severance taxes per year from minerals, it gets less than $4 million from wind generation. Economist and former state legislator Michael Madden pins this policy gap on “the perceived conflict between wind and the state’s primary breadwinner—the mineral industry.”

Wyoming’s woes go far beyond shrinking budgets at the state level. Entire towns and counties have economies and government budgets that rely on fossil fuel extraction, and are in danger of collapsing as the industries fade without plans to transition plans in place. For inspiration on how to create a just transition, Wyoming could look to recently passed legislation in New Mexico that funnels money from utility ratepayers to communities hit by coal-plant shutdowns. That bill, which also includes a mandate for 100% carbon emission-free electricity by 2045, sets aside tens of millions of dollars for site cleanups and job retraining in affected communities.

But the Cowboy State’s situation makes it harder to fund such a transition. In New Mexico, the utility that’s shutting down coal plants and charging ratepayers to finance a just transition will survive, even as it ditches coal and moves to less-carbon polluting energy sources. In Wyoming, the mining and drilling operations that pumped money into the economy can pack up their rigs and dozers and go, leaving the state to sort out the messes they leave behind.

But with the downfall of coal already underway, and the cost of renewables plunging to compete with natural gas, Wyoming’s dependence on minerals and the federal lands they come from will eventually be broken. Asking citizens and businesses to pony up for government services like road and education won’t be easy in a state where low tax and small-government ideologies reign supreme.

Ramping down federal fossil fuel leasing and extraction would require a monumental policy shift from the drill-America-first priorities of the Trump administration. And any discussion about that shift should be informed by a full accounting of the federal subsidies that prop up the industry in the United States and by proxy the states that rake in its revenue. According to a recent study by economists at the International Monetary Fund, the United States spent $649 billion in 2015 subsidizing the fossil fuel industry. That accounting measures the actual cost of consumption against an “efficient” pricing of fossil fuels, which considers the public health and environmental costs of burning fossil fuels.

While that eye-popping number includes factors that could be debated, such as how to account for the costs of climate change and air pollution, the federal government spent on average more than $14 billion in direct subsidies to oil and gas in 2015 and 2016, according to an analysis by the climate advocacy group Oil Change International. That $14 billion—which comes from sources like tax loopholes, distorted royalty rates, and below-market lease and rental rates on public lands—amounts to billions less than fossil fuel companies return in production revenue from public lands and waters and is considerably more than the federal government spent subsidizing renewable energy during the same time period.

Climate action in the form of federal oil and gas reform will have a disproportionate impact on Wyoming, as it continues to rely on fossil fuels and lags behind other states in transition planning. But swapping federal subsidies from fossil fuels to renewable energy could be a major boon for job growth across the West, creating jobs and opportunities for innovation through renewable installations, grid improvements and new storage technology. In states like New Mexico, plans to capture this growing economy—and rejuvenate coal communities in the process—are already underway. With the cost of renewable plus storage projects dipping below the cost of natural gas generation, the sun will shine brightly on states prepared to capture the winds of change blowing across the energy landscape.