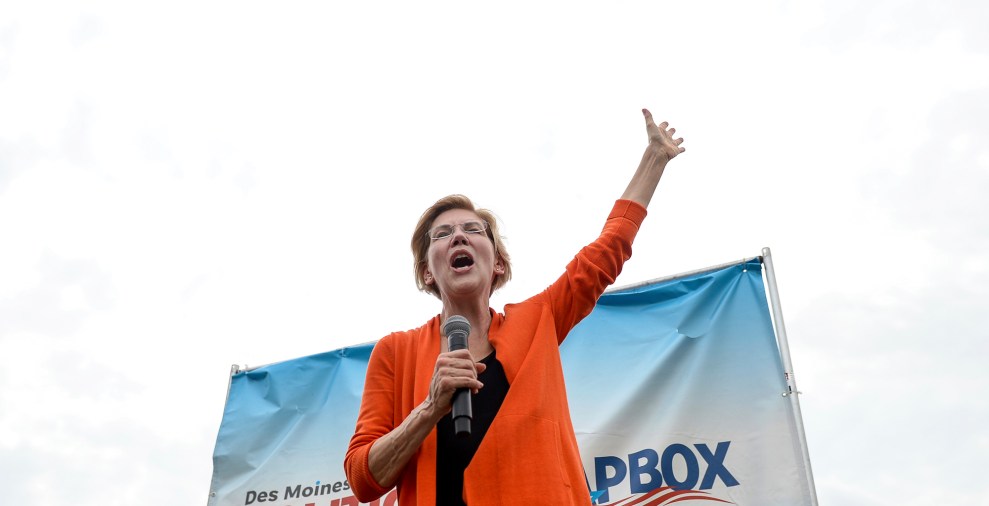 Warren, the seventh candidate to speak to the small audience of climate activists, woke viewers up when she challenged a question from CNN moderator Chris Cuomo. Cuomo asked about President Trump’s recent rollback of a regulation introduced under George W. Bush and finalized under Barack Obama to phase out less efficient lightbulbs: “Do you think that the government should be in the business of telling you what kind of light bulb you can have?”

But the real subtext of his question wasn’t about Trump rollbacks, it was one of the right’s favorite talking points: the argument that climate change requires a major personal sacrifice of individual autonomy to government control.

“Oh come on, give me a break,” Warren said with exasperation. “This is exactly what the fossil fuel industry wants us to be talking about. That’s what they want us to talk about: This is your problem.”

There was an inexplicable amount of talk about cheeseburgers throughout an evening that was otherwise filled with substantive climate questions. Throughout the conversations with the candidates, CNN anchors kept returning to questions concerning false fears that a president could take away plastic straws, red meat, and even Amazon Prime. A president can’t and won’t be doing that in 2021. All of those fears about great personal sacrifice come straight from a Fox News obsession with deliberately misreading the non-binding Green New Deal resolution early on.

Climate deniers seized on fears that major climate legislation would try to ban cow farts or plane rides, and they haven’t let go of those talking points ever since. No matter how preposterous, that narrative still has had an impact: Data for Progress polling has shown phrases like cow farts and airplanes have become associated with the Green New Deal—even if the staid resolution includes nothing on it.

Warren continued: “They want stir up a lot of controversy around your light bulbs, around your straws, and around your cheeseburgers, when 70 percent of the carbon that we’re throwing into the air comes from three industries.”

Like the rest of the candidates, Warren arrived with a climate change plan that’s more aggressive than any we’ve ever seen from previous Democratic presidential contenders. She wasn’t the first candidate to field questions on light bulbs or burgers. But she was the first to challenge the basic Fox News framing that climate action would require the most sacrifice from everyday voters. She pointed out that really, it’s the everyday voters who end up paying the highest price from years of inaction.