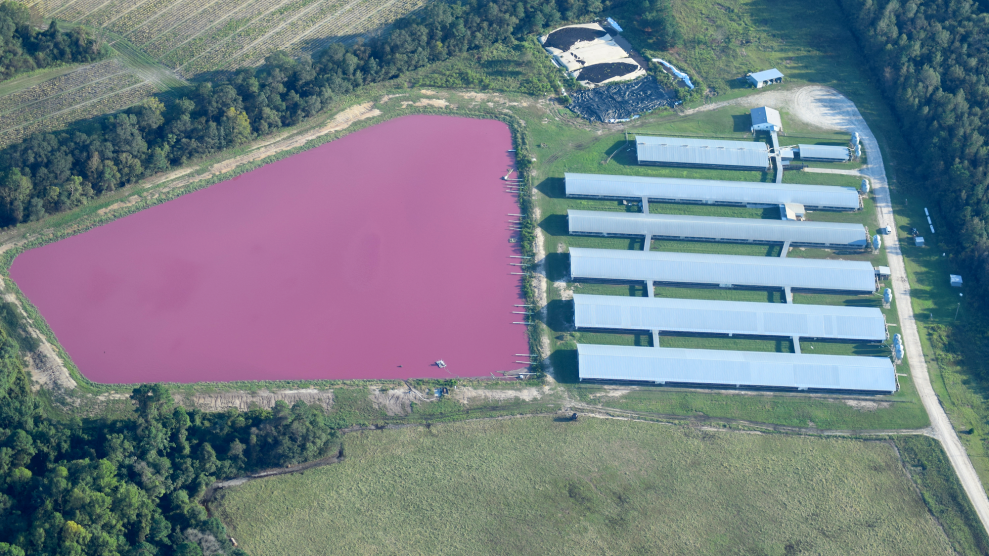 It’s emerging as an annual rite: A massive hurricane roars across North Carolina and deposits epic amounts of water on the state’s coastal plain, home to a tangle of rivers intertwined with one of the globe’s most intense concentrations of industrial-scale hog and chicken operations.

As Hurricane Dorian makes landfall at the coast, what preparations has the region’s meat industry made to prevent yet another replay? In a recent statement on its website, the North Carolina Pork Producers Council, the industry’s trade group, claims “Great strides in hurricane preparation, response.” But the document lists no actual preparations—it mainly downplays the impact of previous hurricanes. (The NCPCC has not returned multiple requests for comment.)

According to Will Hendrick, senior attorney and manager for the environmental nonprofit Waterkeeper Alliances’s North Carolina division, the industry has changed “nothing whatsoever” in response to the the 2016 an 2018 hurricanes—in fact it has pushed to lighten regulations, he says.

One example is the rule preventing hog facility operators from spraying fields with manure just before big storms. To dispose of hog manure, operators tend to spray it on nearby farm fields as fertilizer. Doing so before a massive rain event, however, virtually ensures that the sprayed feces and urine will be be washed away into waterways. Operators are tempted to do it, because spraying opens space in their lagoons, reducing the odds that they’ll be overtopped by a flood and gush more manure.

Under current state code, farmers have to halt spraying within four hours of a hurricane warning, tropical storm warning, or flood watch issued by the National Weather Service. The NC Department of Environmental Quality recently extended the spray window to 12 hours, with new rules that don’t take effect until Oct. 1.

Meanwhile, some hog operations appear to be violating the four-hour rule that remains in place until next month. Aerial flights commissioned by the NC Waterkeepers documented five instances on Thursday of CAFO operators spraying manure onto fields after the four-hour window, Hendrick says.

In 2016, Tropical Storm Hermine and Hurricane Matthew also inspired spasms of pre-storm spraying beyond the four-hour limited, reports Barry Yeoman in a recent article for the Food and Environment Reporting Network. A group called Cape Fear River Watch documented the violations in aerial photos, but the DEQ declined to take action against them.

While North Carolina’s low-lying coastal plain houses more than 900 large operations housing more than 3.8 million hogs, at least the industry is not growing: A moratorium on new open-air manure cesspits has been in place since 2000. The poultry industry, however, has been expanding dramatically in the region, and now produces more total manure than its hog counterpart, according to a February report from Environmental Working Group. Altogether, the state’s inventory of farm chickens jumped from 106.1 million in 1997 to 873.6 million in 2018, US Agricultural Census data show.

As it is with hogs, the flood-prone coastal plains is a major site of poultry production. North Carolina’s Duplin County, which endured massive flooding during Matthew and Florence, is by far the largest producer of both hogs and chicken.

Why would the industry cram so many animals—and their waste—in a region so prone to massive storms? As I showed in a post last year:

Short summary: Residents of the area tend to have lower incomes—and are more likely to be black and Native American—than other parts of the state. In other words … the industry has parked itself into an area populated by marginalized people with few resources to defend themselves against environmental threats.