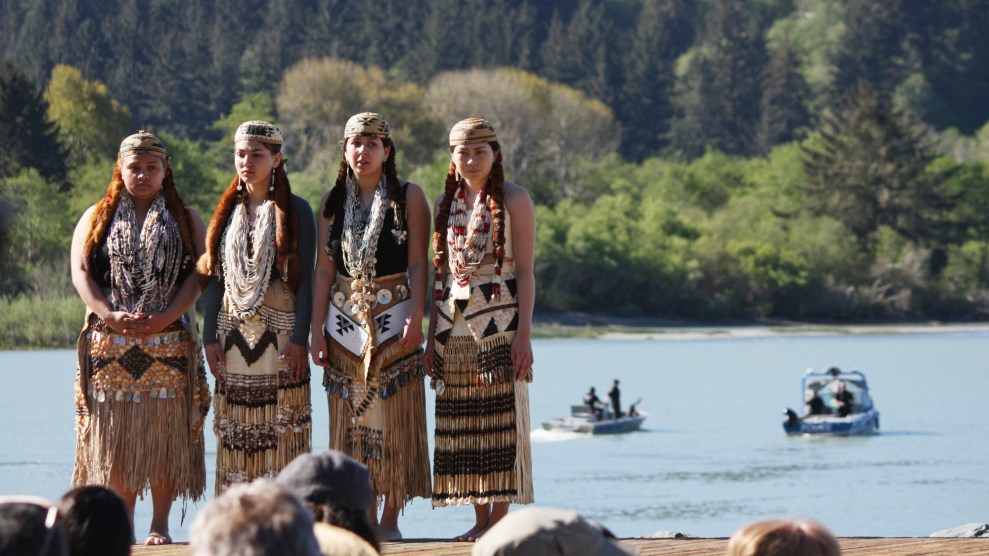 This summer, the Yurok Tribe declared rights of personhood for the Klamath River—likely the first to do so for a river in North America. A concept previously restricted to humans (and corporations), “rights of personhood” means, most simply, that an individual or entity has rights, and they’re now being extended to nonhumans. The Yurok’s resolution, passed by the tribal council in May, comes during another difficult season for the Klamath; over the past few years, low water flows have caused high rates of disease in salmon, and cancelled fishing seasons.

With the declaration, the Yurok Tribe joins other Indigenous communities in a growing Rights of Nature movement aimed at protecting the environment. Last year, the White Earth Band of Ojibwe adopted the Rights of Manoomin to protect wild rice—manoomin—and the freshwater sources it needs to survive in Minnesota. And in 2017, the New Zealand government adopted the Rights of the Whanganui River, stemming from a treaty process with Māori iwis, or tribes, that gives the river its own legal standing in court. “By granting the rights of personhood to the Klamath River, not only does it create laws and legal advocacy routes, but it’s also an expression of Yurok values,” says Geneva Thompson, associate general counsel for the tribe and citizen of the Cherokee Nation, who worked on the resolution. “The idea is that the laws of a nation are an expression of the nation’s values.”

“The idea is that the laws of a nation are an expression of the nation’s values.”

The Yurok resolution draws inspiration from the Rights of Manoomin, as well as the United Nations Declaration on the Rights of Indigenous People, which enshrines the right of Indigenous people to conserve and protect their lands and resources. Legal personhood provides a different framework for dealing with problems like pollution, drought and climate change, though no case has yet been brought to put the Whanganui, Manoomin or Klamath rights to the test in court. The crucial aspect to establishing these legal frameworks, Indigenous lawyers say, involves shifting relationships and codifying Indigenous knowledge—in other words, recognizing non-human entities not as resources, but as rights-holders.

“From New Zealand to Colombia, the powerful idea that nature has rights is taking root in legal systems,” says David Boyd, U.N. special rapporteur on human rights and the environment, of the Yurok Tribe’s resolution. “We must no longer view the natural world as a mere warehouse of commodities for humans to exploit, but rather a remarkable community to which we belong and to whom we owe responsibilities.”

In essence, the Yurok resolution means that if the river is harmed, a case can be made in Yurok tribal court to remedy the problem. Currently, says Yurok Tribe General Counsel Amy Cordalis, laws like the Clean Water or Endangered Species acts can be used to protect rivers by addressing symptoms of problems like diseased fish or pollution. But the Yurok resolution seeks to address the river’s problems directly and holistically, including the impacts of climate change. “You’re working towards making the river whole again,” Cordalis says.

In December 2018, the White Earth Band of Ojibwe and the 1855 Treaty Authority, an organization that upholds treaty rights for Chippewa bands, established legal personhood for wild rice. The resolution draws from the Rights of Nature—an international concept that argues that nature should have the same rights as humans—and is the first law to recognize legal rights of plant species. The rights spell out that within White Earth and other Chippewa ceded territories, wild rice has “inherent rights to restoration, recovery and preservation,” including “the right to pure water and freshwater habitat,” the right to a healthy climate and “a natural environment free from human cause global warming.” Frank Bibeau, executive director of the 1855 Treaty Authority and a White Earth tribal member, says the rights are an extension of Ojibwe treaty rights both on and off the reservation. And they may soon be put to the test—the proposed crude oil Enbridge Line 3 pipeline, which requires state approval, would cross into off-reservation areas where manoomin and freshwater sources are.

The resolutions give tribal nations new legal strategies for use in court, especially in regards to climate change: “The idea of having legal avenues to address the harms of climate change is an important next step as legal systems adapt to the climate crisis,” says Thompson at the Yurok Tribe. And they also encourage a change in mindset, says Maia Wikaira, an environmental law attorney who worked with the Yurok Tribe’s legal team, and a member of the Ngāti Tūwharetoa, Te Rarawa and Ngāpuhi tribes of New Zealand. As tribal nations establish rights for nonhumans, it creates an opportunity for states to follow suit, and incorporate the concept into their own court systems. “It’s another example of where long-held Indigenous perspectives and association with the natural world are not only being embedded within our legal system—they’re being seen in popular environmental movements as an innovative way forward and a necessary step,” Wikaira says. “So, old is new again.”

Rights of nature have already been established in Colombia, Ecuador and India, with varying success, and have also appeared in non-Native communities in the U.S. In Ohio this February, voters passed a law—which is already being challenged—granting Lake Erie personhood rights. An attempt in 2017 by Coloradoans to force the state to grant the Colorado River rights of personhood collapsed after the state threatened possible sanctions against the lawyer behind the case.

Now, Thompson says, the relationship between the Yurok Tribe and the Klamath River is reflected in the tribe’s law. “It shifts the conversation, and it shifts the value system, because you see the environment has a right to be clean and protected for the environments sake.”