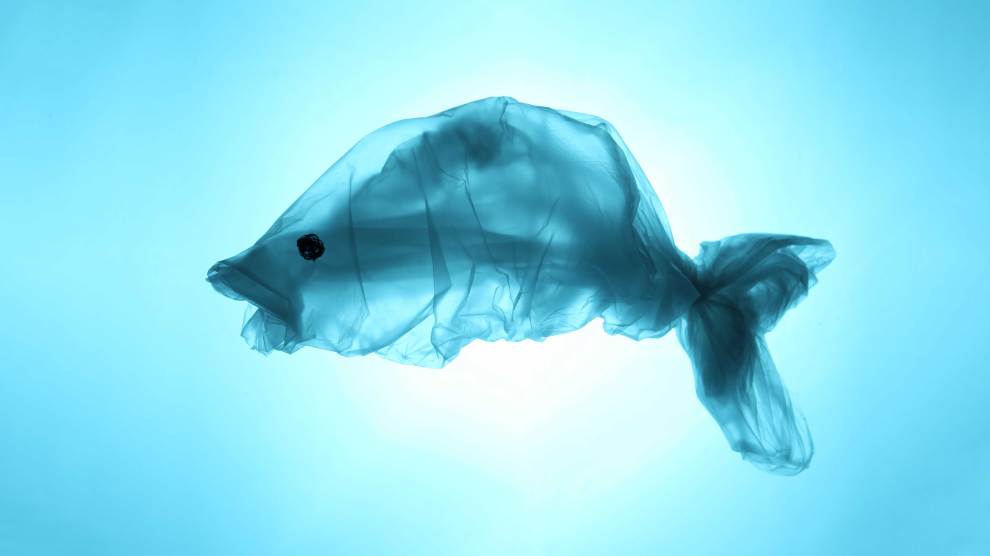 Nearly 50 years ago, scientists studying the North Atlantic Ocean started noticing that tiny fragments of plastic were turning up in their plankton and seaweed samples. The microparticles, they found, absorbed toxic chemicals and were then eaten by flounder, perch, and other fish. Until recently, though, researchers thought these ingested plastics stayed in a creature’s guts and possibly its liver. Removing a fish’s entrails before serving it up appeared to eliminate the risk of eating plastic.

But recent research suggests that these tiny bits of plastic move into fish flesh. And now seafood, a recent study found, is the third-largest source of chemical-laden “microplastics” of sources analyzed so far for the average American consumer, behind bottled water and air. “Plastic is now part of our food system,” says Kieran Cox, a marine ecologist and PhD candidate at the University of Victoria in British Columbia who led the study.

Americans are eating, inhaling, and drinking at least 74,000 pieces of microplastic a year.

Microplastics are bits of material that are smaller than 5 millimeters, the width of a pencil-top eraser. The vast majority of this debris comes from “single use” plastic products such as bottles, bottle caps, straws, and bags. The study, which was published in June in the journal Environmental Science & Technology, estimates that Americans are eating, inhaling, and drinking at least 74,000 pieces of microplastic a year. But that’s a “drastic underestimate,” Cox says, because no one has measured microplastic content in major food groups such as meat, dairy, and grains.

It’s hard to say what consuming all this plastic means for human health. We don’t yet have standardized analytical measures to assess people’s exposures, says ecotoxicologist Jane Muncke, managing director of the independent Swiss charity Food Packaging Forum, who was not involved in the University of Victoria study. Such standards, along with biomonitoring studies to measure levels of microplastics in blood and urine, are critical to enforcing regulations designed to protect our health.

More than 9 billion tons of plastic has been produced since the 1950s. Today about 40 percent is used for packaging, mostly for single-use food and beverage containers.

Lakes and rivers transport a massive amount of this plastic debris, and up to 14 million tons of it reaches the ocean each year, researchers estimated in a 2015 study. They predicted a tenfold increase in just six years if current management practices continue. In a recent survey of the Great Lakes that hasn’t been published yet, chemist Sherri Mason, sustainability coordinator at Penn State Behrend, found 230,000 particles of plastic per square kilometer in Lake Ontario. Since Lake Ontario is the last lake in the Great Lakes chain, Mason points out, much of that plastic will flow into the St. Lawrence River, which empties into the North Atlantic.

Plastics can take hundreds of years to break down in marine waters, fragmenting into smaller and smaller pieces, which litter the sea surface by the trillions. Researchers now find microplastics wherever they look, from the deepest ocean trenches to the remote reaches of the Arctic.

Marine species mistake these plastic particles for food, filter feed them by accident, or ingest them by eating contaminated prey. Freshwater species also absorb microplastics through their gills and possibly their skin. Some 220 species and counting, including fish and shellfish, have gobbled up these particles, with a mounting array of negative effects. Microplastics can physically harm fish, crustaceans, and other animals by blocking their intestines, puncturing their organs, or filling their stomach with garbage.

Once in a fish’s gut, these bits cause problems after entering the circulatory system, cells and tissues, including the liver and even the brain, altering how the animal hunts and feeds. Ingestion of microplastics has also been linked to inflammation, altered immune response, reduced feeding activity, and growth problems in offspring. These findings come primarily from lab studies that expose organisms to higher doses than have been seen in the wild. Still, public health experts worry that if exposures are chronic, lower doses could cause problems for marine life and humans.

And though scientists once assumed that people could reduce the risk of eating seafood simply by gutting their fish, recent studies suggest that’s no longer a safe assumption. A team of Malaysian researchers reported in Scientific Reports in 2017 that the flesh of two species of dried fish had even higher levels of microplastics than their organs. And in August, in a study published in Food Additives & Contaminants, Iranian researchers reported finding microplastics in the flesh of all five seafood species they analyzed.

The plastic particles that enter muscle tissue are so small that many labs don’t have the tools to detect them.

Until recently, most studies of microplastics in fish ignored their flesh in favor of the gastrointestinal tract. That’s partly because researchers thought microplastics stayed in the GI tract and partly because the particles that enter muscle tissue are so small that many labs don’t have the tools to detect them. Likewise, few studies have investigated whether microplastics can concentrate, or “biomagnify,” in animal flesh as they move up the food chain from prey to predators, and thereby pass along bigger doses, and potentially bigger risks, to humans.

When the Iranian researchers examined that question in fish, crabs, and prawns taken from Persian Gulf fishmongers in their August study, they found no evidence that microplastics from crustaceans concentrated in the flesh of the fish that ate them. But they did report that 82 percent of the samples tested had the particles in their muscles—so families who eat local seafood are getting plastic with their meal.

Americans eat more salmon than almost any other fish. Canadian scientists reported finding microplastics in the guts of juvenile chinook salmon earlier this year in the journal Environmental Pollution. No one has yet reported finding these plastic fragments in salmon flesh, but it’s probably just a matter of time before someone does. The potential of finding microplastics in such a popular seafood “is a major concern,” says Judith Enck, a visiting professor at Bennington College in Vermont and former regional administrator of the Environmental Protection Agency.

Scientists have also documented microplastic contamination in farmed fish and shellfish. Whether farmed species pick up this plastic from the fishmeal they’re fed remains an open question.

It remains unclear what, exactly, these particles do to us after we eat them, but it’s probably not good. Persistent chemicals like PCBs (once used as  coolants and lubricators in refrigerators and electrical equipment) and other contaminants lurking in our waterways glom onto particle surfaces. These plastic bits also carry with them endocrine-disrupting bisphenols, phthalates, and other toxic additives.

Earlier this year, an international team of researchers identified more than 900 chemicals associated with plastic packaging, including 16 linked to cancer, hormone disruption, and other health hazards. But it’s tricky to get a true picture of which chemicals we’re being exposed to. Plastic manufacturers guard their recipes as proprietary and the chemical reactions are so complex that even producers don’t always know what’s in the final product. So toxicologists have to guess what to test for.

Plus most studies are done on one chemical at a time, even though we’re constantly exposed to a chemical soup, says Maricel Maffini, an independent consultant and food safety expert who contributed to the analysis: “We have little to no data on how the body reacts to collective and chronic exposures to chemicals.” Making matters worse, toxicology studies usually test chemicals on adult animals, even though fetuses are more vulnerable.

“We have little to no data on how the body reacts to collective and chronic exposures to chemicals.”

And it appears that plastic particles may be able to cross the placenta to the fetus. In unpublished experiments in rodents presented at a meeting on microplastics in March,  Phoebe Stapleton, a Rutgers University developmental toxicologist, tagged nanoplastic particles (generally defined as smaller than a micron, about the width of a human hair) with fluorescent labels to track their movement. Then she exposed the lungs of pregnant rats to the particles for about two weeks, and saw the particles move first to several tissues in the mother, and then to many of the same tissues in its developing pup. More research is needed to explore the implications of these preliminary results, but they support earlier published work showing that plastic nanoparticles cross placentas donated by women after their babies were delivered.

Even though Stapleton’s results still have to be vetted through peer review, her approach was “pretty solid,” says Tracey Woodruff, director of the Program on Reproductive Health and the Environment at the University of California–San Francisco. “We know that industrial chemicals pass through these barriers because we’ve measured them in the fetal liver and placenta,” Woodruff says. The same thing has also been seen with particulate matter in air pollution, she says, and the finding that plastic nanoparticles can cross the placenta is consistent with the air pollution science.

A small pilot study found microplastics in the stool of eight people from eight different countries.

“The facts tell us that potentially the entire human population is exposed to micro- and nanoplastics,” says Muncke, of the Food Packaging Forum. Last October, researchers reported preliminary results of a small pilot study that found microplastics in the stool of eight people from eight different countries. The study, published in the peer-reviewed Annals of Internal Medicine last week, analyzed just one sample per person and did not determine whether the microplastics moved into the bloodstream or liver or had any health impacts.

With plastics production forecast to increase exponentially, we’ll likely continue to be exposed to more and more of the material. “The seafood industry would be well served by getting out in front on this issue,” Enck says, by working on laws to reduce plastic pollution. She believes that as concerns about plastics in the food system grow, people will stop buying seafood, starting with products like shrimp, oysters, and mussels that Americans typically eat whole.

Cox is hesitant to suggest that people stop eating fish, which is a valuable source of protein and nutrients around the world. The biggest source of microplastics found in our diet so far is bottled water, he says. By cutting out bottled water, you not only reduce how much plastic you ingest, but also how much you throw away.

Muncke thinks corporations bear the responsibility for this scourge. “Plastic producers have no right to distribute their products across the globe and into our foodstuffs,” she says—“especially if the consequences are unknown.”

This story was produced in collaboration with the Food & Environment Reporting Network, a nonprofit investigative news organization.