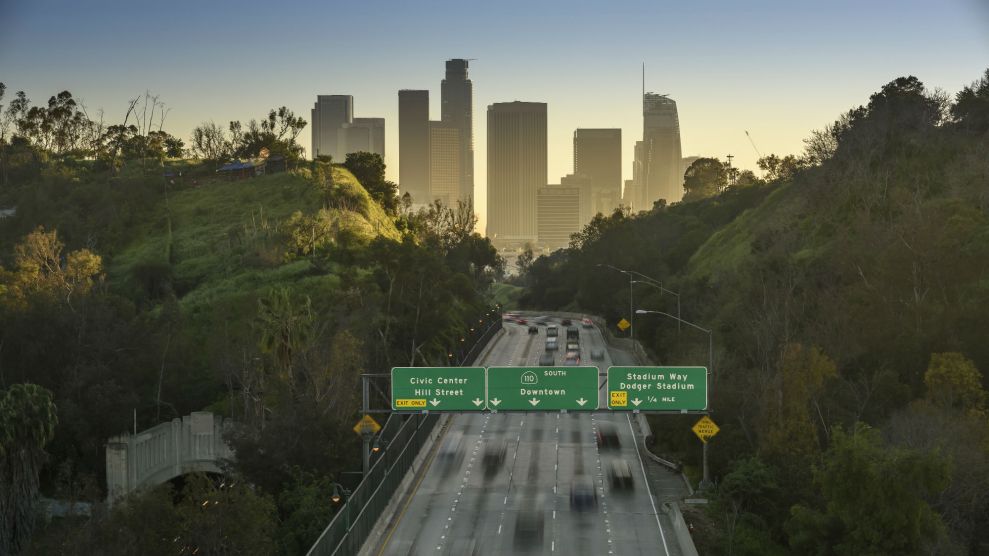 Los Angeles, the sprawling city of freeways, thinks its future depends on trees. And it may be right: Research shows trees improve air and water quality, store carbon, and can even reduce stress. All these benefits don’t seem to be lost on Mayor Eric Garcetti, who in late April announced his version of a Green New Deal for the city. Among other measures, he mandated that every new city-owned building be all-electric, established a goal to phase out styrofoam, called for a 50 percent reduction in greenhouse gas emissions by 2025, and, crucially, tasked the city with the goal of planting a whopping 90,000 trees by the end of 2021. “With flames on our hillsides and floods in our streets,” Garcetti said in a press release at the time, “cities cannot wait another moment to confront the climate crisis with everything we’ve got.”

The ambitious tree-planting project falls under the purview of Rachel Malarich, the city’s forest officer—a job that was just created in August to “oversee the growth of Los Angeles’ urban forest” as part of Garcetti’s Green New Deal. An arborist with more than a decade of experience in urban forestry, Malarich was appointed just days before the United Nations’ Intergovernmental Panel on Climate Change released a report that emphasized the role of trees and forests in combatting climate change. The project will grow what’s already the largest urban forest in the country, making what happens in Los Angeles an important model for other cities looking to go green.

A real tree nerd myself, I called Malarich last month, when she was just a few weeks into the job, to chat about the unnoticed benefits of urban foliage, which species is her favorite, and the challenges of actually planting tens of thousands of trees in just a few years. Below is an edited and condensed version of our conversation.

In my mind, your day-to-day looks something along the lines of Leslie Knope’s job from Parks and Rec. What kinds of things do you deal with now or do you expect to deal with?

I don’t think I’m down into a routine yet. In this initial time, I’m meeting key stakeholders, including heads of departments and council offices and kind of doing the rounds of doing introductions. I’m also doing some background research. But I don’t know yet, honestly [laughs]. I’m still finding out where to get paper and pens.

I was in Washington, DC, on a trip and walked through a city street and then walked through part of the National Mall that had tree cover. And it was so dramatically cooler.

Well, now you’ve discovered the secret of what I’m doing with my time; I’m out there with a shovel—no I’m kidding [laughs]. The truth is, we don’t plant if at all possible between say, June and September. It’s too hot for people to plant, so that limits more the time in which we’re planting.

But the reason it’s totally feasible and I feel real confident is, it isn’t just the city who’s planting. There are more than five nonprofits that plant trees in Los Angeles and do fundraising and community organizing around that. And they work very, very closely with the city and with each other to plant trees. There’s definitely a portion of this goal that’s going to be me doing some very strategic planning and grant writing and engaging our community groups and partners to help us reach this aspirational goal. But it’s doable. We have the partnerships and expertise in place to do it.

Are there areas or neighborhoods that you plan to focus on?

Obviously, higher-need neighborhoods. We have areas around the Port of LA that have low canopy cover. We have portions of the San Fernando Valley which are extremely hot and could use some additional shade. And portions of South and East LA that also have tremendous opportunity to get additional canopy and are under different environmental and social burdens.

Are there some benefits of urban trees that you think most people don’t realize?

Trees help us capture stormwater. They slow down rain when it falls from the sky, which is a huge deal here in Los Angeles, with our storm events, to be able to capture some of that water. [Water] droplets collect on the leaves and then run down the branches and have time to soak into the ground rather than just hitting the pavement and rolling away.

Another one that I don’t think people always think about is the transpiration that trees provide. They provide cooling overnight by releasing moisture through the transpiration process. That is something else that continues to amaze me. I remember I was in Washington, DC, on a trip and walked through a city street and then walked through part of the National Mall that had tree cover. And it was so dramatically cooler. And it was nighttime, so it wasn’t that there was shade covering me. It’s again, those living things that are cooling the area.

They also bring communities together. The research shows us that they improve feelings of social cohesion in a neighborhood. And feelings of connectedness to our communities can also increase our resiliency in light of other disasters. I think that trees are a really important part of our communities, and they are hugely connected to public health.

Are there any challenges specific to Los Angeles that you’re dealing with?

I don’t know that this is necessarily unique to LA, but obviously, we have the issue of infrastructure conflicts. The trees that were planted 50 years ago that were too big, they weren’t the right tree for the right place, and they are now lifting the sidewalk. So at the same time, they are providing shade and benefits to those communities, while making them [Americans with Disabilities Act] inaccessible.

I think that trees are a really important part of our communities, and they are hugely connected to public health.

One thing that is kind of unique to the region is the invasive shot hole borer [a fungus-farming beetle] that appeared several years ago. Most pests attack one group of trees—like with Dutch Elm disease or the Emerald Ash borer. This invasive shot hole borer has lots of trees that it likes to eat. And it’s actually not the bug that’s killing the trees, but Fusarium, the fungi that they use to feed their offspring, that is, in fact, causing the tree to fail. That has been a huge issue for this area and one that has concerned a lot of arborists. And a lot of people don’t know about it. It can kill a tree within two years and there’s no cure at this point.

I don’t know if I have an answer for that. If I was a person of the public wondering why we need such a position, I don’t always think that arborists, our city foresters, get the respect they deserve having to deal with [pause]—in the forest, a tree can lose a limb, no problem, no one’s around to get hit. It’s the risk management side of urban forestry that makes the job challenging and really important. And people don’t always appreciate that.

Part of the reason that I’m having a hard time with this question is that the scope of LA’s urban forest is really unique in terms of the size—the city is huge. And it has a ton of different trees. And not a lot of climates can handle as much diversity as LA has. We can take species from all over the world and grow them here in a lot of cases, so it’s kind of hard to compare.

This is a question I’ve gotten actually from some staff in the past couple of days. The hard thing about trees [pause]—if I’m, let’s just say, working with street lights, I’m going and maybe replacing a bulb, right? When I’m looking at trees, it is a site-specific decision. So I’m standing in front of a property, I’m thinking, “Is there a tree on the property already that’s hanging over the sidewalk? Are there power lines? Is there grass or is it a dirt parkway? Is it concrete?” There are so many different factors that we consider and have to look at. “Is it going to do well in this area closer to the coast? Is it going to do well with the sandier alluvial soil in the Northeast Valley?” It not a simple decision.

When I’m looking at trees, it is a site-specific decision. So I’m standing in front of a property, I’m thinking, “Is there a tree on the property already that’s hanging over the sidewalk?”

In some areas, sure, there’s a tree that I think would be better at capturing particulate matter or providing a larger canopy, but it is not able to grow in as small a space as is available to me. So in some communities, what we have is four-by-six foot concrete cuts the trees can go in and that drops it down to maybe 10 species that I’m looking at planting. So for me, it’s the tree that’s going to be best for that location. Right tree, right place.

Do you have a personal favorite species of tree?

It really depends. Coast Live Oak is my current favorite. It’s one that’s native to California. If you drive up the coast, up the 101 freeway, is what you’re going to see in the pastures along the road. They support over 300 species of birds and insects. They’re just beautiful and they’re keystone components to our ecological systems.