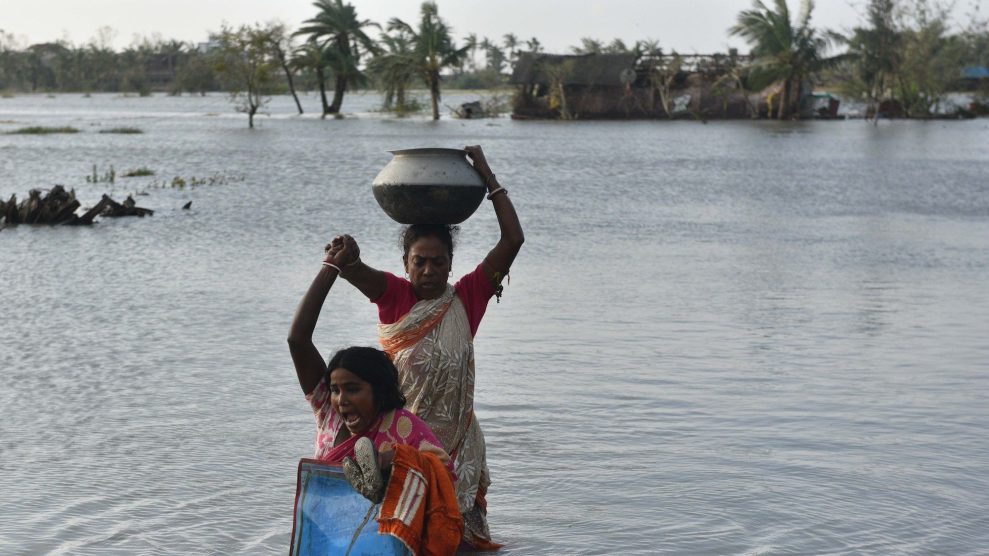 Women carry belongings from their submerged house in the aftermath of Cyclone Bulbul in Amarabati Village, India on November 10./Zuma

The climate crisis is so epic, so vicious, so wide-reaching, that at this point there are few aspects of the human experience it isn’t transforming. Supercharged wildfires are devastating California, heat waves are killing more people and more crops, cities are struggling to adapt to strange new climates. The global transformation underway is also increasingly exposing a fundamental yet often hidden factor complicating matters: gender.

Today in the journal Nature Climate Change, researchers published an analysis of 25 studies looking at how climate change is imperiling the agency of women in Africa and Asia. “We’ve been looking for more technical solutions, whether in terms of better varieties of seeds or breeds of cattle, but we’re not really looking at the way social institutions are affecting people’s abilities to adapt,” says University of East Anglia gender analyst Nitya Rao, lead author on the study.

All terrible crises in their own right, but exacerbated by underlying societal norms. In East Africa, for instance, men in pastoral communities have traditionally wandered 15, maybe 30 kilometers from home in search of water for their cattle, returning to their families periodically. But with climate change, now they’re having to travel up to 150 kilometers. Before, women would go with the men and milk the cattle, using the product both for their family’s own nutrition and as an extra source of income, and heading home as needed. Now that the men have to cover much greater distances, the women end up staying at home base, thus losing out on the invaluable resource that is milk.

In India, the dynamics are even more complicated. Anticipating lower yields, men may plant seeds and get the crop going, then migrate away to find work in factories or on construction sites. Left with these new farming duties, on top of childcare and other household responsibilities, women struggle to support the family. Their agency slips farther and farther away as the family’s plight grows.

Gender plays a major role here, but it’s far from the only complicating societal factor in the age of climate change. In polygamous households, an age hierarchy determines a wife’s agency: Elder women are the authority figures, for instance determining who eats what, and will dispatch younger women to walk to find ingredients. And with climate change bringing food scarcity, that puts ever more of a burden on these younger wives.

But the polygamous structure can also bring stability in a changing world. “In East Africa, we found that actually some of the women within polygamous households did much better in terms of their ability to respond and adapt than separated or divorced women, because polygamous men tended to be the better off, with more resources,” says Rao.

To say this is purely a problematic binary, that men suffer this way, and that women suffer this way, is to oversimplify matters. “It’s not just, women as a category, but which women are we talking about?” says Rao. “Similarly, it’s not men as a category, but which men are we talking about? So we can look at class for instance, or wealth, we can look at ethnicity and caste, we can look in Africa particularly at age or generation, which becomes a very important marker of women’s status, but also of women’s rights to exercise decision making.”

Which also means adapting to the climate crisis will take more than throwing money at the problem, with subsidies for instance. A divorced woman and a married woman are both women, but their struggles will be vastly different. And while the climate crisis is full-tilt terrible for people in the developing world, it’s also a driver of change. “In South Asia, you find that men who are migrating in order to survive actually give much more responsibility to their wives,” says Rao. “They give them resources, they support them in order to manage the farms.” The patriarchal structure simply can’t withstand the weight of climate change.

Add to that a boost in women’s education, and the structure will further crumble. “If we look at what this article tells us, that women’s agency is being affected, we have to look at the role of education,” says Stephanie Buechler, who studies rural development at the University of Arizona, but who wasn’t involved in this research. “We have to make sure that girls are supported in food production or supported in other activities they want to do, to give them that flexibility to make their own decisions about their future livelihoods.”

The temptation is for girls to migrate to cities, as so many people are doing around the world. Encouraging them to stay and support their communities means educating them about crops that are more resistant to climate change. It’s about to the technical aspects, but also connecting them with role models. “That could be an older farmer in their own community, that could be a water manager at the regional level, that could be a biologist,” Buechler adds. “It means that basically you do education through teaching kids what they could become.”

Climate change is bad news all around, but with the right strategies in place, it also gives us opportunities to confront long-standing gender norms and give women the agency they need to not only weather this crisis, but to thrive.