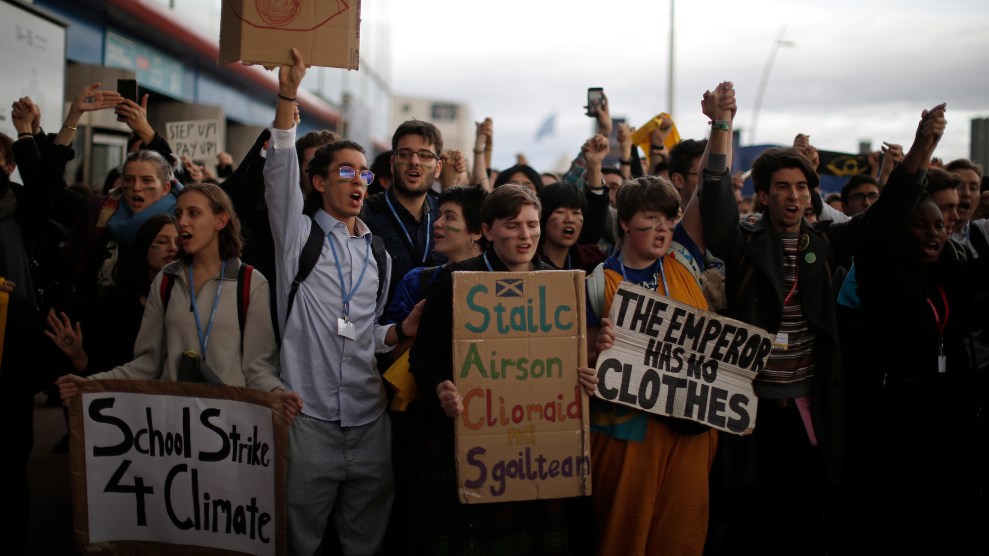 A youth protest outside COP25 in Madrid.AP/Manu Fernandez, Zuma

Each year, the United Nations holds a conference on climate change to try to nudge the biggest polluters toward containing warming under well below 2 degrees Celsius. Now, that goal seems more fantastical than ever; the world is on track for the absolute worst-case, business-as-usual scenario of more than twice that warming by the end of the century.

The stakes are high enough that even in a normal year the conference is a grueling marathon of all-night negotiating sessions. But this year’s conference in Madrid, known as COP25, entered into overtime on day 12 as an indisputable mess, as the world moves further away from the goals outlined in Paris in 2015. At the center of this mess, of course, is the United States.

“I’ve been attending these climate negotiations since they first started in 1991, but never have I seen the almost total disconnection we’ve seen here[…]in Madrid between what the science requires and the people of the world demand, and what the climate negotiators are delivering,” said Alden Meyer of the Union of Concerned Scientists, who has attended these talks for more than 25 years.

The US, along with Australia, Brazil, Japan, and Saudi Arabia, has helped create a gridlock in this year’s negotiations. The vacuum left by the US has led countries interested in maintaining the status quo—including Australia, a major coal exporter, and Brazil, led by a right-wing government promoting deforestation of the Amazon—to block stronger rules for a global carbon-emissions trading system that are supposed to go in effect next year.

Fundamentally, COP25 brings to a head a widening chasm between the richer, historic polluters that prefer to maintain the status quo and the poorer nations that suffer the most consequences despite contributing the least to the crisis.

Jake Schmidt, international director of the Natural Resources Defense Council, laid the blame on “key polluting countries responsible for 80 percent of the world’s climate-wrecking emissions” that “stood mute, while smaller countries announced they’ll work to drive down harmful emissions in the coming year.”

Costa Rica’s environment and energy minister Carlos Manuel Rodríguez called out the US, Brazil, and Australia for blocking a deal in the late hours, reports Climate Change News. “Some of the positions are totally unacceptable because they are inconsistent with the commitment and the spirit that we were able to agree upon [in Paris in 2015].”

The US has worked to water down the latest draft of the agreement, which includes language that “invited” countries to “communicate by 2020 their mid and long-term climate plans.“ In UN parlance, this is particularly weak; stronger language would have urged countries to update or strengthen their commitments. The US said outright it won’t support the more ambitious call to action.“We don’t support such language and we would not think that it would lead to the balance of this text, but rather take us quite far in the other direction,” Kimberly Carnahan, a US State Department official said this week, according to the Washington Post.

An analysis from the Climate Action Tracker gives you a glimpse of why another lukewarm global deal is so disastrous. The chart below shows how far off target the world currently is (blue shows how far the policies currently get us, and the green and yellow show what would be needed to keep warming below 2 degrees Celsius).

“At a time when scientists are queuing up to warn about [the] terrifying consequences if emissions keep rising, and school children are taking to the streets in their millions, what we have here in Madrid is a betrayal of people across the world,” said Mohamed Adow, a climate justice advocate with the think tank Power Shift Africa.

COP25 this year is essentially a warmup for 2020, a pivotal year for determining the next stage of the Paris deal, when countries are supposed to submit more ambitious pledges for 2030 than they submitted five years ago. It is also the year that President Donald Trump can officially withdraw from the agreement, and it coincides with the US election and a potential changing of the guard.

In the meantime, Trump can still stall action. The climate activist group Extinction Rebellion summed up the state of the talks by dumping a giant pile of horse manure outside COP25, with a sign attached: “The horseshit stops here.”