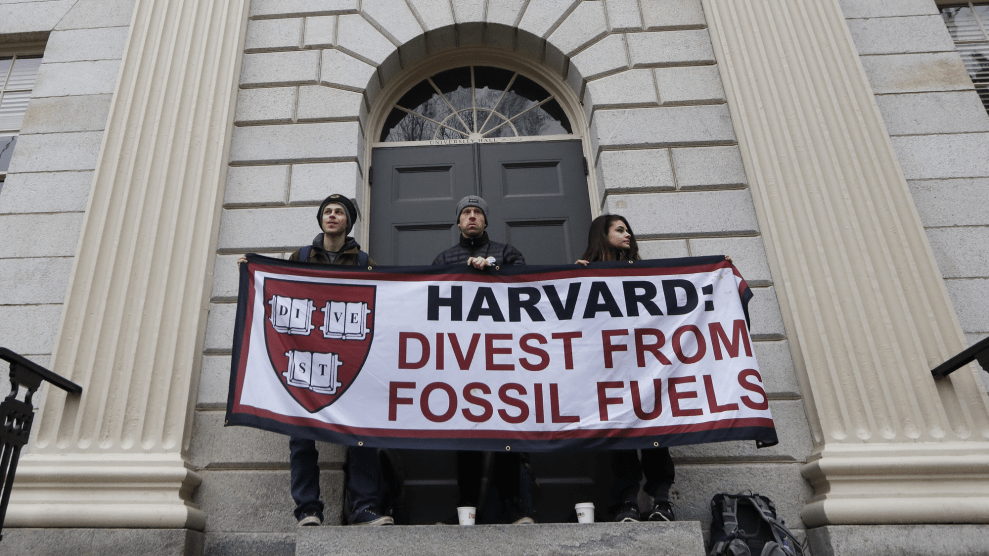 In late November, hundreds of protesters stormed the field of the Yale Bowl during the annual Harvard-Yale football game, sprinting from both sidelines in the final minutes of halftime. Chanting “fossil fuels have got to go” as well as “OK boomer,” the rowdy crowd, bearing beer cans and vape pens, delayed the game for an hour before police officers asked them to leave and arrested 50 dissenters, but not before their message echoed through the bleachers: “Harvard & Yale, Complicit,” read one banner. “This is an emergency,” said another.

Many of the protesters belonged to Fossil Free Yale and Fossil Free Harvard, student groups lobbying their universities to stop investing in oil and gas companies. The confrontation, which made national headlines, was the latest episode in a nearly decade-long fight to make Harvard divest its $41 billion university endowment—the largest in the world—from fossil fuel–related companies. The campaign is part of a larger movement that has already pushed thousands of institutions, including the government of Ireland and New York City’s pension funds, to divest trillions of dollars in assets with the logic that de-funding the worst emitters will curtail global emissions. In a National Academy of Sciences paper published this week, scientists from around the world called this an “intervention” on which stabilizing the climate “critically depends.”

Bill McKibben, co-founder of the environmental group 350.org, has argued that “Money Is the Oxygen on Which the Fire of Global Warming Burns,” calling divestment an “additional lever” that “could be exercised in a matter of months” while Washington dithers on climate. A 2013 Oxford study called the “fossil free” movement the fastest growing divestment campaign in history. Other campaigns have pushed divestment from weapons, private prisons, and apartheid-era South Africa, the last of which spurred enough “capital flight” to help bring the system to an end.

Some of today’s efforts are working: In September, the University of California pledged to remove fossil fuels from its $83 billion endowment and pension portfolio. Researchers at 350.org calculate that institutions like banks, schools, churches, and charitable foundations have divested a total of $12 trillion from fossil fuels worldwide, most of it in the last five years.

While Columbia and Yale have divested from some coal producers, no Ivy League schools are fully on board. Getting Harvard to divest “is important for both the name and the amount of money involved,” said Nathán Goldberg, who graduated from the university in 2018. Last year, Harvard’s endowment grew to $40.9 billion. “If we crack that nut, it could lead to a domino effect,” Goldberg said. Along with fellow Class of 2018 alum Danielle Strasburger,who works for an election data start-up, Goldberg founded Harvard Forward, a coalition of graduates and faculty that are striving to build “soft power” by organizing more alumni around the cause.

“Harvard has a certain reputation they’d like to uphold of being leaders forging a path for other universities to follow,” says Lindsay Meiman, a spokesperson for 350.org, “but when it comes to fossil fuel divestment, they’re absolutely lagging behind.” In addition to the University of California’s total divestment, major universities like Georgetown, Oxford, and Cambridge have at least divested from coal and tar sands, while dozens of others, like the University of Hawaii, have divested from oil and gas as well. Harvard’s administration has “ignored the very clear demands of their students and alumni,” says Meiman. “They’re choosing the side of these companies.”

Harvard’s massive endowment is managed by an unelected board, the Harvard Corporation, which appoints its own members. Those appointments are subject to the consent of the larger Board of Overseers, whose members are directly elected by alumni. On today’s Board of Overseers, “no wants to be the one to rock the boat,” says Goldberg. “Yet former overseers have told us that if there’s a mandate from alumni, there are people willing to follow.” He and Strasburger want to create that mandate by electing overseers who strongly support divestment.

Five new overseers are elected each year, and every Harvard graduate gets a vote. But the average alumnus “has only vaguely heard of this,” says Strasburger. And getting candidates on the ballot isn’t easy: The Harvard Alumni Association chooses eight prospects who automatically qualify, while other contenders must be backed by roughly 2,900 signatures in what the organizers describe as “a very convoluted process.” (The signature threshold used to be around 200, but was raised after a slate of candidates widely seen as challenging affirmative action qualified for the 2016 ballot.)

Harvard Forward has until February 1 to collect enough alumni signatures to get their five chosen pro-divestment candidates on the April overseer ballot. If their slate wins, they believe it will build the power needed to push divestment forward.

In a Harvard Magazine column published last year, University president Lawrence Bacow expressed support for the divestment conversation, but re-iterated his belief “that engaging with industry to confront the challenge of climate change is ultimately a sounder and more effective approach.” In an email, Harvard spokesperson Christopher Hennessy pointed to the university’s principles for sustainable investment and its ambitious plans to make its campus carbon-neutral by 2026.

Bacow has also argued that divestment campaigns wrongly seek to politicize the university’s inner workings, according to the Harvard Crimson. “There are other ways that the University tries to influence public policy through our scholarship,” said Bacow. “We don’t think that the endowment is an appropriate way to do that.”

Strasburger and Goldberg push back on that notion, pointing to Harvard’s choice to drop stocks associated with the Darfur genocide during the mid-2000’s, its divestment from tobacco companies in 1990, and its partial divestment from companies upholding apartheid in South Africa during the late 1980’s. The apartheid move only came after more than 50 universities had already divested, and following a decade of student, faculty, and alumni pressure that culminated in South African Archbishop Desmond Tutu’s election to the Board of Overseers in 1989.

According to Harvard Forward, the university only discloses about 2 percent of its endowment. Outside sources have estimated the worth of its pre-divestment Darfur holdings at roughly $16 million, its tobacco investments at more than $50 million, and its apartheid-related holdings at over $500 million. Very rough estimates peg Harvard’s current fossil fuel holdings around $560 million—a nest egg that’s guarded by industry big dogs.

As the Harvard Crimson has reported, Harvard Corporation member Theodore Wells currently represents oil and gas giant ExxonMobil in climate change–related litigation (though a university spokesperson said Wells has recused himself from fossil fuel divestment conversations and votes since 2015). At least three other Corporation members have significant investments in the industry, including David Rubenstein, a billionaire who, in his capacity as President of the Economic Club of Washington, DC, has heaped glowing praise on former ExxonMobil CEO and former Secretary of State Rex Tillerson. Oil giants Shell, Chevron, and BP are all major funders of Harvard’s energy and climate research.

Harvard Forward and Fossil Free Harvard have big names on their side, too. High-profile alumni like Natalie Portman, Cornel West, and Robert Kennedy, Jr. have pledged their support for divestment, while reports from Harvard Magazine show the topic dominating current Harvard faculty meetings. Said French professor Virginie Greene, “I don’t think our students will wait [10 to 15 years] before letting us know that, by our lack of action, we have forfeited any intellectual and moral authority to direct them.”
No current overseers have come out in favor of divestment, but the Board’s inaction prompted Kat Taylor, CEO of Beneficial State Bank and wife of Democratic presidential candidate Tom Steyer, to resign from her overseer role in 2018. Harvard’s endowment had “severely underperformed financially compared to its peers,” she wrote in an open letter accompanying her resignation, “even as we have continued to invest in activities and products that undermine the well-being of our communities, nation and planet.”
The Harvard Forward organizers say they currently have about 2,400 signatures of the 2,900 they will need to get their slate of pro-divestment candidates on the Overseer Board ballot. They hope they will end up with enough “wiggle room” to accommodate the disqualification of some signatures by strict election authorities. If Harvard Forward mobilizes enough alumni to get their slate elected in April, it may not immediately lead to divestment, but would create “strong momentum” and “a mandate for Harvard to take action,” Strasburger says.
“The overseers are the ones who guide the school,” adds Goldberg. “If we manage to flip the Board, and get people on the inside who can lead on this issue, it won’t be that Harvard has been moved, but that Harvard has decided to move,” he says. Plus, “other schools have democratically elected boards, with similar petitions to qualify. Yale, Penn, Dartmouth are also in our sights.”
It may be no coincidence that Harvard’s endowment has underperformed while clinging to fossil fuel investments: beyond ecological concerns, analysts increasingly point to the financial risks of coal, oil, and gas. Earlier this month, the world’s largest asset management fund, BlackRock, announced that it was partially divesting the $7 trillion it manages from coal. “Awareness is rapidly changing,” wrote CEO Larry Fink, “and I believe we are on the edge of a fundamental reshaping of finance.”
Update, 02/04/2020, 7:00 p.m. ET: In a landslide 179-20 vote, Harvard’s Faculty of Arts and Sciences called on Harvard to divest its endowment from the fossil fuel industry. While the vote was largely symbolic, since the Faculty has only advisory power over the Harvard Corporation (which controls the endowment), Harvard professors hailed it as a public statement of dissent from their administrators’ stance against divestment. Alumni organizers with Harvard Forward say they submitted more than 4,500 alumni signatures in advance of the February 1 deadline to qualify their pro-divestment slate of candidates for the spring Board of Overseers election, well over the 2,936 signatures required. The signatures are now pending verification with Harvard’s Office of the Governing Boards.