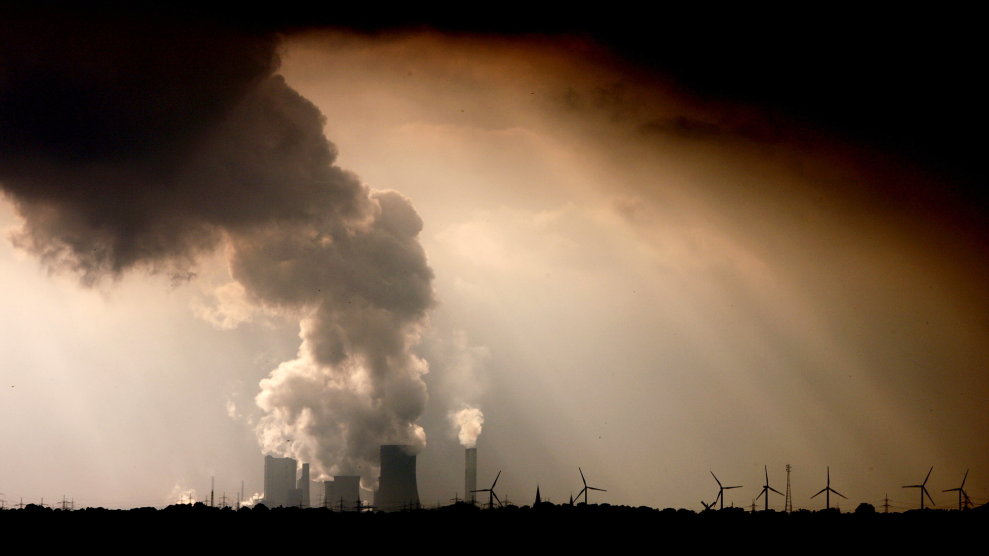 The researchers examined 6.5m tweets posted in the days leading up to and the month after Trump announced the US exit from the Paris accords on 1 June 2017.Oliver Berg/Getty

The social media conversation over the climate crisis is being reshaped by an army of automated Twitter bots, with a new analysis finding that a quarter of all tweets about climate on an average day are produced by bots, the Guardian can reveal.

The stunning levels of Twitter bot activity on topics related to global heating and the climate crisis is distorting the online discourse to include far more climate science denialism than it would otherwise.

An analysis of millions of tweets from around the period when Donald Trump announced the US would withdraw from the Paris climate agreement found that bots tended to applaud the president for his actions and spread misinformation about the science.

The study of Twitter bots and climate was undertaken by Brown University and has yet to be published. Bots are a type of software that can be directed to autonomously tweet, retweet, like or direct message on Twitter, under the guise of a human-fronted account.

“These findings suggest a substantial impact of mechanized bots in amplifying denialist messages about climate change, including support for Trump’s withdrawal from the Paris agreement,” states the draft study, seen by the Guardian.

Conversely, tweets that could be categorized as online activism to support action on the climate crisis featured very few bots, at about 5% prevalence. The findings “suggest that bots are not just prevalent, but disproportionately so in topics that were supportive of Trump’s announcement or skeptical of climate science and action”, the analysis states.

Thomas Marlow, a PhD candidate at Brown who led the study, said the research came about as he and his colleagues are “always kind of wondering why there’s persistent levels of denial about something that the science is more or less settled on”.

The researchers examined 6.5m tweets posted in the days leading up to and the month after Trump announced the US exit from the Paris accords on 1 June 2017. The tweets were sorted into topic category, with an Indiana University tool called Botometer used to estimate the probability the user behind the tweet is a bot.

Marlow said he was surprised that bots were responsible for a quarter of climate tweets on an average day. “I was like, ‘Wow that seems really high,’” he said.

The consistent drumbeat of bot activity around climate topics is highlighted by the day of Trump’s announcement, when a huge spike in general interest in the topic saw the bot proportion drop by about half to 13%. Tweets by suspected bots did increase from hundreds a day to more than 25,000 a day during the days around the announcement but it wasn’t enough to prevent a fall in proportional share.

“In terms of influence, I personally am convinced that they do make a difference, although this can be hard to quantify.”

Trump has consistently spread misinformation about the climate crisis, most famously calling it “bullshit” and a “hoax”, although more recently the US president has said he accepts the science that the world is heating up. Nevertheless, his administration has dismantled any major policy aimed at cutting planet-warming gases, including car emissions standards and restrictions on coal-fired power plants.

The Brown University study wasn’t able to identify any individuals or groups behind the battalion of Twitter bots, nor ascertain the level of influence they have had around the often fraught climate debate.

However, a number of suspected bots that have consistently disparaged climate science and activists have large numbers of followers on Twitter. One that ranks highly on the Botometer score, @sh_irredeemable, wrote “Get lost Greta!” in December, in reference to the Swedish climate activist Greta Thunberg.

This was followed by a tweet that doubted the world will reach a 9-billion population due to “#climatechange lunacy stopping progress”. The account has nearly 16,000 followers.

Another suspected bot, @petefrt, has nearly 52,000 followers and has repeatedly rejected climate science. “Get real, CNN: ‘Climate Change’ dogma is religion, not science,” the account posted in August. Another tweet from November called for the Paris agreement to be ditched in order to “reject a future built by globalists and European eco-mandarins”.

Twitter accounts spreading falsehoods about the climate crisis are also able to use the promoted tweets option available to those willing to pay for extra visibility. Twitter bans a number of things from its promoted tweets, including political content and tobacco advertising, but allows any sort of content, true or otherwise, on the climate crisis.

Research on internet blogs published last year found that climate misinformation is often spread due to readers’ perception of how widely this opinion is shared by other readers.

Stephan Lewandowsky, an academic at the University of Bristol who co-authored the research, said he was “not at all surprised” at the Brown University study due to his own interactions with climate-related messages on Twitter.

“More often than not, they turn out to have all the fingerprints of bots,” he said. “The more denialist trolls are out there, the more likely people will think that there is a diversity of opinion and hence will weaken their support for climate science.

“In terms of influence, I personally am convinced that they do make a difference, although this can be hard to quantify.”

John Cook, an Australian cognitive scientist and co-author with Lewandowsky, said that bots are “dangerous and potentially influential”, with evidence showing that when people are exposed to facts and misinformation they are often left misled.

Although Twitter bots didn’t ramp up significantly around the Paris withdrawal announcement, some advocates of action to tackle the climate crisis are wary of a spike in activity around the US presidential election later this year.

“Even though we don’t know who they are, or their exact motives, it seems self-evident that Trump thrives on the positive reinforcement he receives from these bots and their makers,” said Ed Maibach, an expert in climate communication at George Mason University.

“It is terrifying to ponder the possibility that the POTUS was cajoled by bots into committing an atrocity against humanity.”