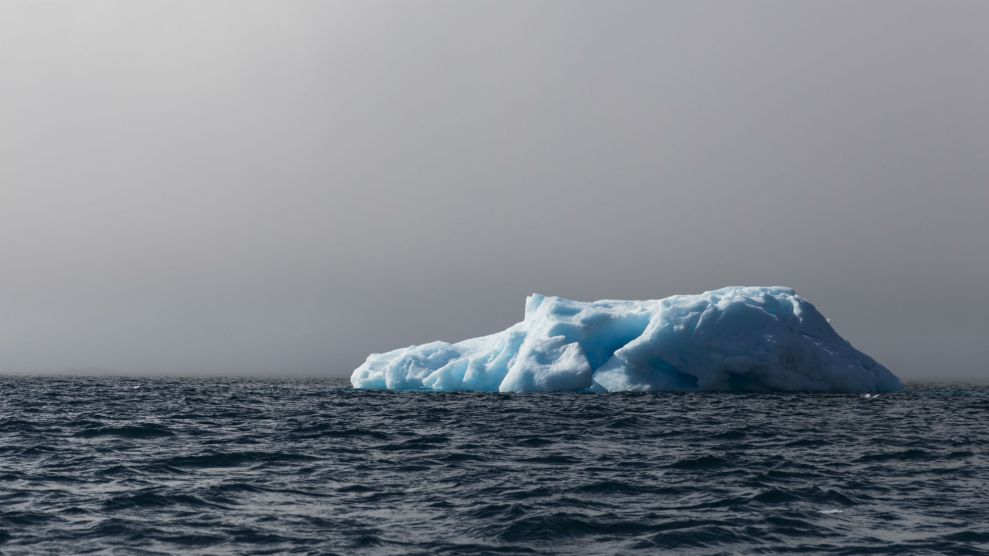 An iceberg in the sun in Paulet Island, Antarctica.Ric Tapia/AP

Last week Antarctica outdid itself, and not in a good way, setting a high for its warmest temperature ever recorded: 65 degrees Fahrenheit. If the first thought that popped into your head is that balmy weather certainly can’t be good for the continent’s ice, you’d be right. But the heat is also a problem for the tiny creatures that teem across Antarctica.

Antarctica has a reputation as a wasteland where no trees grow and where few large animals roam, save for penguins and seals. But step into the Martian-like dry valleys and you’ll be treading on a bustling community of tiny organisms, like nematode worms and ultra-hardy water bears and mites.

“Really, that’s the charismatic megafauna of continental Antarctica. The lions and tigers of the dry valleys are these microscopic animals at the very top of the food chain.”

“Really, that’s the charismatic megafauna of continental Antarctica,” says evolutionary ecologist Byron Adams of Brigham Young University, who is currently surveying life on the continent. “The lions and tigers of the dry valleys are these microscopic animals at the very top of the food chain.” They’re species that are found nowhere else on Earth, feeding on bacteria, and, at times, on one another. If it gets too cold, they can slip into a sort of suspended animation—the water bear in particular is famous for its ability to dry out and reanimate years later.

But they may be ill-prepared for what’s coming, and indeed, what’s already here. Antarctica has two possible futures, as Adams and other scientists see it. One is business as usual but more extreme: Antarctica remains Mars-like in its barrenness and dryness, only these qualities get turned up to 11. The other possibility is that it becomes hotter, yet also wetter. It would be much like South America’s Patagonia region is now: a place with not a tremendous amount of vegetation but more biocrusts like lichen and mosses, the “living skin” of the planet. “I think most scientists probably favor the wetter, warmer, greener hypothesis,” Adams says.

That may sound like an impending diversification of Antarctica’s relatively simple ecosystems, but, in reality, it may be more like homogenization. Ecologically speaking, the continent is a segregated place: With water locked up in frozen lakes and rivers—some of which don’t thaw for decades—bodies of solid water don’t often melt, flow, and converge. That means the microbial communities that live in, say, liquid water below surface ice are unique, having gathered and established ecological relationships in isolation.

But now rivers, lakes, and subsurface ice are thawing and flowing and beginning to converge. “You start to see these features starting to become more and more connected, so that the biota are moving more easily between them,” says Adams. They exchange nutrients, too, eliciting a biological response. “The soil animals that are highly adapted to these super harsh conditions—cold, dry, salty—their numbers are going down, and their distributions are starting to shrink a little bit.”

Adams knows this because he’s doing controlled experiments in Antarctica’s dry valleys. He sets aside plots of land and periodically samples them, sorting out all the species, even counting the number of males, females, and offspring. Other plots he manipulates by adding nutrients or water to test how the ecosystems might morph in a warming world. “It kind of looks like a little garden,” Adams says. “The helicopter pilots here call us ‘worm herders.’ We’ve got worm farms out there.”

Things aren’t looking good for one particular nematode, Scottnema lindsayae, the most abundant animal on the continent. It loves Antarctica’s typically harsh conditions but is seeing its preferred habitats shrink as the climate grows milder and the landscape fills with melted ice water. The water bears, on the other hand, tend to like warmer, wetter habitats, where more food grows in the form of algae and cyanobacteria. Indeed, the tiny bears are already increasing in abundance.

“I could tell you who the losers are and who the winners are with climate,” Adams says. “But ultimately, I think even the winners down here could become losers.” As temperatures climb in Antarctica, the exclusive club of species that can survive the place starts to open up. That means invaders have a chance to make land and compete with Antarctica’s native species. “Normally, the stuff that does blow down here or migrate down here lands in an environment that’s so harsh that it just filters out. As those conditions start to ameliorate, you’re going to have increased connections between these isolated places and the rest of the planet. That’s going to lead to some pretty drastic changes, ecologically,” says Adams.

That’ll be true both in the lands that Adams surveys and in the surrounding waters. For instance, Antarctica is home to a bizarre group of fishes that survive only because they’re filled with antifreeze—special proteins that imprison ice crystals before they can multiply and freeze the blood. As the ocean warms, other fish species could head south to seek refuge from their own increasingly hot waters. That could bring a whole lot of competition for the native species marvelously adapted to an icy sea.

Meanwhile, the very base of the food chain in the waters around Antarctica is in peril, because tiny crustaceans called krill are struggling to find food as more ice melts. “They eat these microscopic plants that grow on the underside of sea ice, so they’re starting to take the hit. And as a result, some penguins that depend on krill are having problems,” says Richard Aronson, a marine biologist at the Florida Institute of Technology.

The consequences of an Antarctica that continues to tally 65-degree days will extend far beyond the continent itself. When huge ice shelves—slabs of ice up to 1,500 feet thick that straddle land and sea—warm up, ponds of water form on their surfaces. That water trickles down into cracks, and because water is denser than ice, the weight of the liquid pries the shelf apart, a process known as hydrofracturing. “Hundreds of fractures slice through, and the entire plate of ice crumbles within a matter of a few weeks,” says polar scientist Ted Scambos, of the University of Colorado, Boulder.

These ice shelves behave a bit differently than glaciers in Alaska or Greenland, where they sort of crumble at the coast. In Antarctica, the plates of ice flow out onto the water and float. As that melting water is working its way down and fracturing the ice, it’s also flowing along the bottom of the shelf, where the ice meets bedrock along the coast. As a result, the meltwater lubricates the shelf and accelerates its movement out to sea. This can actually pull more interior parts of the shelf toward the sea, where the waters might further melt the ice. Bottom line: Once the ice starts to melt, it can really go fast. And as that water merges with the ocean, it will contribute to sea level rise.

It doesn’t help matters that a feedback loop kicks in as the poles warm. White ice reflects a good deal of the sun’s energy back into space. But when ice melts, it exposes dark soil or waters beneath. “As it disappears, the ocean below is able to collect more sunlight and actually warm more quickly,” says NASA climate scientist Joshua Willis, who studies melting. “So there are these feedbacks that exacerbate the warming at the poles.”

The really troubling bit is that these stressors are piling up on Antarctica’s creatures and exacerbating one another. Some species might be able to handle warmer temperatures, or massive injections of freshwater into the ecosystem as ice rapidly melts, or the arrival of competitors better adapted for a more temperate climate. But few of them will be able to handle all of these changes at once. And that’s why, for Antarctica’s climate scientists, the arrival of a spring-like day feels extraordinarily bleak.