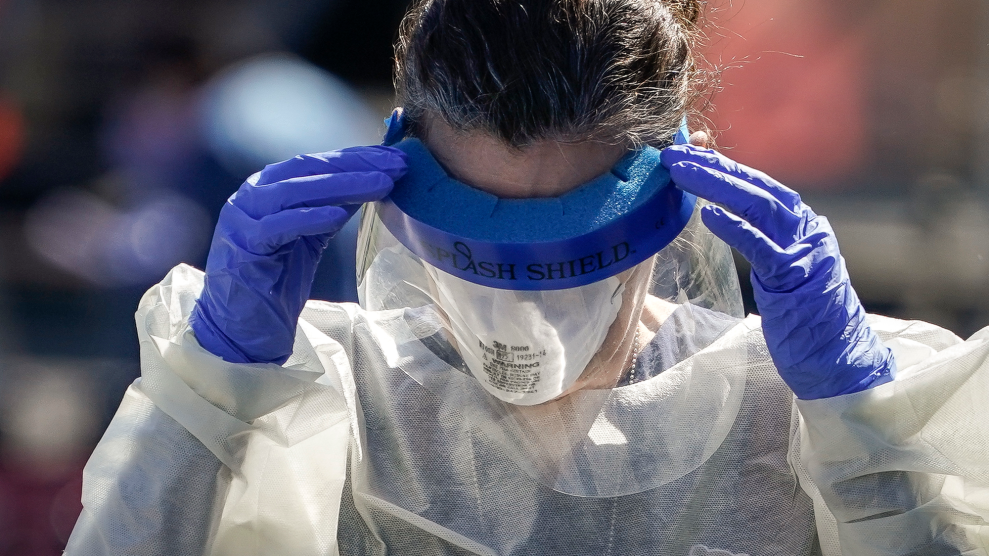 A medical worker at a coronavirus drive-thru testing site in Washington, D.C., on April 2.Drew Angerer/Getty

This story was published in partnership with ProPublica, a nonprofit newsroom that investigates abuses of power. Sign up for ProPublica’s Big Story newsletter to receive stories like this one in your inbox as soon as they are published.

The ads amount to $2.2 million since Health and Human Services Secretary Alex Azar declared a public health emergency on Jan. 31. About $1.2 million has been spent since President Donald Trump’s national emergency declaration on March 13, the disclosures show.

“Our attention will be focused on our clinicians so they can provide care for patients who need it,” Envision CEO Jim Rechtin said in a statement this month.

But Envision and TeamHealth have continued to pour money into a joint political ad campaign. Their TV and radio spots are aimed at pressuring lawmakers working to address “surprise billing,” where patients get stuck with huge medical costs from out-of-network providers they had no say in choosing. The ads oppose capping out-of-network costs based on median prices in the area.

The air time was bought through Doctor Patient Unity, an advocacy group funded by staffing firms TeamHealth and Envision. TeamHealth, which has more than 16,000 clinicians, is owned by Blackstone, and KKR owns Envision, with more than 25,000 medical providers.

Doctor Patient Unity has spent $57 million on ads since its campaign started last June, making it the largest political advertiser other than presidential campaigns, according to Advertising Analytics, an ad-tracking firm.

Doctor Patient Unity stood by its campaign and vowed to continue fighting against legislation that the group says would hurt doctors. “It was a misguided proposal before COVID-19—it’s reckless in this current environment,” spokesman Greg Blair said in a statement. “While the big insurance companies continue to report massive earnings amid an unprecedented economic downturn, we remain committed to defending our doctors and clinicians as they fight COVID-19 on the frontlines.”

TeamHealth and Envision declined to comment beyond Blair’s statement. Blackstone and KKR didn’t respond to requests for comment.

The spending totals don’t include digital ads, which aren’t reported to the FCC. Facebook’s own disclosures show several thousand dollars more on recent ads invoking the coronavirus pandemic to make their case. Some of the ads name individual lawmakers and target their constituents.

“Doctors are stepping up to face the coronavirus crisis,” an ad from April said. “During this crisis, Congress needs to ensure they have the resources they need to continue saving lives.”

Sen. Elizabeth Warren, D-Mass., and Rep. Katie Porter, D-Calif., called on the companies’ private equity backers to reverse the pay cuts, citing ProPublica’s earlier reporting. “As business leaders who direct and manage billions of dollars, you should be stepping up to protect the financial security of frontline essential workers,” Porter and Warren said in an April 15 letter. “They are putting themselves at risk every single day to provide for those fighting COVID-19, and to put them at risk of financial harm during this time is unacceptable.”

Lawmakers have spent months hammering out a deal on surprise billing that balances the interests of patients, doctors and insurers. House and Senate committee chairs and ranking members struck a bipartisan compromise but weren’t able to get it included in the December spending deal or the March coronavirus stimulus package.

The ads from Doctor Patient Unity oppose that bill because it would settle out-of-network bills according to median costs in the area, an approach that the ads attack as “government rate setting.” The ads urge viewers to call their representatives to thank them for opposing the proposal or urge them to oppose it.

Blair, the group’s spokesman, said the legislation would “impose a 20% pay cut on our medical professionals, risking hospital closures and making it harder for patients to get the critical care they need.” The 20% figure, Blair said, is based on a Congressional Budget Office report from July. But the CBO report does not predict a 20% drop across to board; rather, it says the proposal to pay out-of-network bills based on local median rates would push the average (mean) rate to converge on the median, a difference of 15% to 20% nationwide.

“Under current law, the distribution of payment rates across all providers is highly skewed—some command rates that are well above the median,” the CBO analysts wrote. “Although the national average rate may drop by such an amount, the effects within a given market for any particular insurer and for specific providers will be quite different, with payment rates rising in some cases and falling in others.”

An advocacy group representing health insurers, who are at odds with the staffing firms over the proposed legislation, called Doctor Patient Unity’s ads misleading. “At a time when they are cutting back benefits and pay for their own employees, they prefer to invest more resources in running a disingenuous ad campaign about their support for doctors,” the Coalition Against Surprise Medical Billing said in a statement to ProPublica. “Give us a break. Millions of patients are at risk of receiving a bankrupting surprise medical bill because these companies and out-of-network providers continue to exploit the market.”

Envision has said it won’t send surprise bills to COVID-19 patients, so patients will be responsible only for in-network copays. TeamHealth said it won’t bill patients above what insurers pay (known as “balance billing”).

“They’ve always just been worried more about the bottom line than being appreciative of their people,” said an Envision doctor whose pay was cut and who spoke on the condition of anonymity because the company has prohibited employees from speaking publicly. “Physicians don’t feel like they’re being heard and respected for what they do, but we still show up and take care of patients. This is part of what’s breaking the system down.”