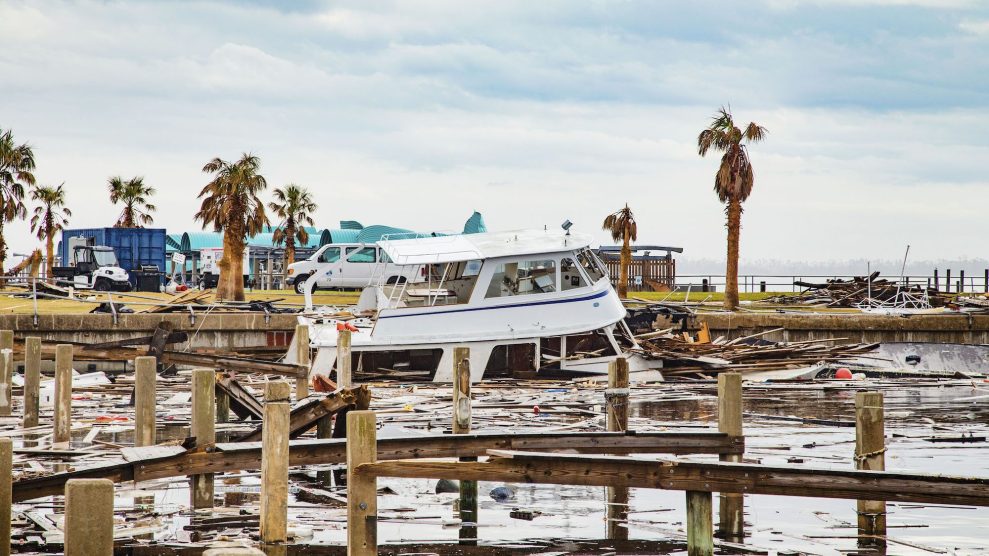 The visible remains of boats left to rot are still awaiting clean up after they were taken over by Hurricane Michael at the Panama City Marina in Florida.Cristy Nielsen/Zuma

As if 2020 hasn’t been difficult enough, the National Oceanic and Atmospheric Administration just released its prediction for the Atlantic coast’s hurricane season. They estimate that there’s a 60 percent chance that the number of tropical storms and hurricanes will be “above-normal.” In terms of actual weather events, that translates to between 13 and 19 storms severe enough to be named and up to six major hurricanes. The chances that the coming hurricane season, which runs from June to November, will be less active than normal are 10 percent by NOAA’s count.

The forecast, which was announced on Thursday, was made by NOAA Climate Prediction Center, a part of the National Weather Service. In a press release announcing the forecast, Neil Jacobs, the acting head of NOAA, said, “NOAA’s analysis of current and seasonal atmospheric conditions reveals a recipe for an active Atlantic hurricane season this year.”

“NOAA’s analysis of current and seasonal atmospheric conditions reveals a recipe for an active Atlantic hurricane season this year.”

Over the last few decades, hurricane seasons have become increasingly severe, in part due to climate change, and some of NOAA’s reasons for its prediction about the jump in severity this year seem to point in that direction. It cites “warmer-than-average sea surface temperatures in the tropical Atlantic Ocean and Caribbean Sea, coupled with reduced vertical wind shear, weaker tropical Atlantic trade winds, and an enhanced west African monsoon.”

Also inserted into NOAA’s announcement was a suggestion that the public’s emergency evacuation plans be reassessed to consider the COVID-19 pandemic. “Social distancing and other CDC guidance to keep you safe from COVID-19 may impact the disaster preparedness plan you had in place, including what is in your go-kit, evacuation routes, shelters and more,” said Carlos Castillo, FEMA’s acting deputy administrator for resilience.

The danger of hurricanes isn’t limited to the damage done during the event itself, but also in what comes later, especially flooding, which causes an average of $8.2 million in annual damage in the US. Despite this, according to 2018 study by Governing, population and development growth in 100-year flood zones have outpaced growth outside of them since at least 1990. Another study, published from the University of Bristol also in 2018, suggested that FEMA’s flood zone boundaries, in which 13 million people live, were too small, and that approximately 40 million people are potentially exposed to a 100-year flood. That’s the kind of flood severe enough that it only has a one percent chance of happening; in other words, is likely to come only once a century.

The combination of growing populations facing more severe natural disasters is further complicated by the fact that the National Flood Insurance Program, which provides more than 90 percent of flood insurance, is $20 billion in debt.

If the Atlantic hurricane season this year lines up with NOAA’s projections, it will be the fifth severe hurricane season in a row. That’s in no small part due to the warming of the earth. A joint NOAA-University of Wisconsin at Madison study released this week found that temperature rise increased the likelihood of storms growing to the severity of hurricanes by eight percent each decade for the last 40 years.

This year follows a decade of devastating storms that some communities are still recovering from. As of late 2019, two years after Hurricane Maria, which ravaged Puerto Rico and killed about 3,000 people, 25,000 homes on the island still rely on blue FEMA tarps for roofing. As the damage of hurricanes compound and their incidence becomes more frequent, full recovery gets more difficult.

Last year, in the aftermath of the devastating Hurricane Dorian, Penn State University meteorologist Michael Mann spoke the USA Today about the worsening conditions. “As we continue to warm the planet, hurricane intensities will increase further,” he said. “There’s no new normal. It’s an ever-shifting baseline toward more destructive storms.”