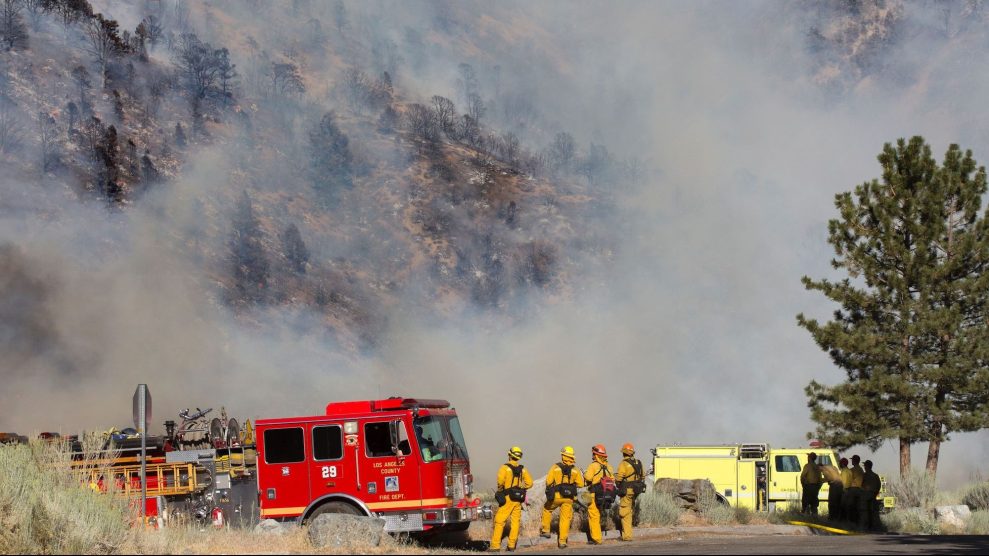 Even during a normal wildfire season on the West Coast, the life of a wildland firefighter is brutal. They’re digging trenches by hand to create fire breaks, breathing smoke, and baking in unrelenting heat. And now the region prepares to face a fire season like no other, as the COVID-19 pandemic has brought with it a logistical nightmare: How do you mobilize an army of first responders while keeping them socially distanced, while also preparing for the possibility of having to evacuate whole communities to safety?

“If you look at a fire engine going down the street, there’s four personnel inside who technically are not socially distanced,” says Mike Mohler, deputy director of the California Department of Forestry and Fire Protection, also known as Cal Fire. “But when we look at a large wildland fire, our base camp operation can hold sometimes up to 6,000 personnel.”

Included among them are of course the firefighters streaming in and out from the wildfire’s front lines. But that figure also counts paramedics, as well as law enforcement officers who watch over the California prison inmates who run the kitchens. Private vendors are also coming in and out, delivering and maintaining trailers and portable toilets. And that’s not to mention the government officials who are coordinating the response and journalists covering the story. All of them have to be socially distanced, when possible. After all, paramedics and police may have already been exposed to the virus in their day-to-day work, and may not be showing symptoms. An outbreak at a base camp could easily hobble the fight against a wildfire, which may last for weeks.

Before each fire season—which in California begins around this time of year and runs through November, though climate change is threatening to make wildfires a year-round threat—Cal Fire surveys the state for open spaces suitable for these camps, like fairgrounds and parks. “What we’re looking at now with COVID-19 is that footprint is going to take on a much larger area,” Mohler says. That space, he says, is for socially distancing, “just some simple things we would never have thought of prior to COVID-19, like feeding and sleeping.”

It’s a bit easier to distance firefighters on the front lines of a wildfire, at least. The rule already in place for hand crews—the firefighters digging out fire breaks with hand tools—is to “keep your dime,” or stay 10 feet away from the next firefighter so you don’t maim them with a pickax. Still, you can’t socially distance inside a firetruck on the ride to or from a wildfire. (A similar problem plagues other industries like farming and meat packing, where employees have to ride crowded shuttles to work sites.) And the job by its nature sometimes requires close contact, both between firefighters and the people they’re trying to protect. “I can tell you, firefighters will adhere to social-distancing rules, but not at the sacrifice of somebody’s life or property,” Mohler says.

“I can tell you, firefighters will adhere to social-distancing rules, but not at the sacrifice of somebody’s life or property.”

Cal Fire’s work actually began this spring with controlled burns, a critical tool for preemptively weakening wildfires. It’s tempting to consider a wildfire an evil that must be stopped at all costs—stamp one out early, after all, and you’ll save a whole lot of time, resources, and property damage. But wildfires are a perfectly natural, and indeed indispensable, component of the landscape; they can clear out brush without leveling an entire forest. Vegetation grows back, and it burns again, ad infinitum.

At least, that is, until people developed the western US and declared war on wildfires. Towns have pushed farther and farther into forests, amid overgrown brush that turns into tinder in this increasingly hot and dry world. Consequently, Northern California has faced catastrophes like 2018’s Camp Fire, which burned so intensely and moved so quickly that it virtually obliterated the 30,000-person town of Paradise, destroying 19,000 structures and killing 86 people.

Controlled burns in the spring are essential for keeping that from happening again. And indeed the California government declared controlled burns an essential duty during the pandemic, so Cal Fire could lessen the chances of an out-of-control blaze later this year. As usual, the firefighters carefully monitored wind patterns to make sure smoke wouldn’t blow into cities. That’s of particular importance in the age of COVID-19, a disease that attacks the lungs: Early research from Germany suggests that air quality is a major contributor to coronavirus mortality.

Meanwhile, up in Oregon, the state’s Department of Forestry has been making its own preparations for what may be a brutal fire season, given the shortage of rain in the region. “What we’ve done this year in light of Covid is say, The best wildfire to fight is the one that you prevented,” says Jim Gersbach, a public information officer with the department.

Most wildfires in Oregon are accidentally started by humans; the burning of yard trimmings is a particular hazard. So the Department of Forestry has doubled down on its public education campaigns, because fighting massive blazes will be all the harder during a pandemic: Oregon, like California, relies on firefighters flying in from out of state to help fight out-of-control wildfires. “This year, we’re going to try and do it within our region as much as possible,” says Gersbach, “so that we’re not taking people from an area where maybe Covid is at a higher frequency, and running that risk of introducing that into our communities.”

For now, Oregon’s local firefighters have also doubled down on their isolation techniques, with crews operating as family units and limiting contact with other crews. “It might be that you get assigned a vehicle, and that’s your vehicle for the summer,” says Gersbach. “Other people don’t get in your truck and take it the next day. We think that will reduce the potential that if someone, say, is asymptomatic and spreading it, at least we don’t have to worry about, Oh God, what truck did they get in?”

Even with all the prep work in place—all the controlled burns and logistical tweaks to account for COVID-19—agencies have to prepare for the possibility of mass displacement during a wildfire, like what happened when the people of Paradise fled to neighboring communities. This year, the timing here could be terrible, as epidemiologists predict that a second wave of COVID-19 could land in the fall, the very time when California’s wildfires are at their most vicious. This itself is a consequence of additional terrible timing: Every autumn, seasonal winds whip through the state. That isn’t much of a problem if the first rains have already come, but thanks to climate change, those rains are arriving later and later in the year. It takes a mere spark to ignite brush that’s been drying out all summer, as walls of flame ride on 50-mile-an-hour winds.

“An evacuation center that would hold a thousand people, we can only put 500 in.”

If that catastrophe does come this fire season, officials will have to figure out how to house displaced people in a socially distanced way. “There’s an expectation that we will protect them,” Mohler says. “An evacuation center that would hold a thousand people, we can only put 500 in.” If hotels are still empty when the next big wildfire hits, maybe some municipalities will do what San Francisco did to house its homeless residents during the pandemic by renting vacant hotel rooms for them.

Another tricky sociological factor is known as crisis fatigue. It’s that sense of burnout you’re probably feeling in the midst of the coronavirus pandemic—perhaps you’ve grown distrustful of politicians or just tired of hearing about the emergency. Californians can develop the same fatigue about wildfires, that constant vigilance waiting for the next big blaze. “We are so used to going through ups and downs, especially in this state, with earthquakes, floods, and fires,” says Mohler. “I mean, we get the crap kicked out of us. But now you add Covid. And let’s say we issue an evacuation warning. Are people going to be like, Oh my God, here we go again?”