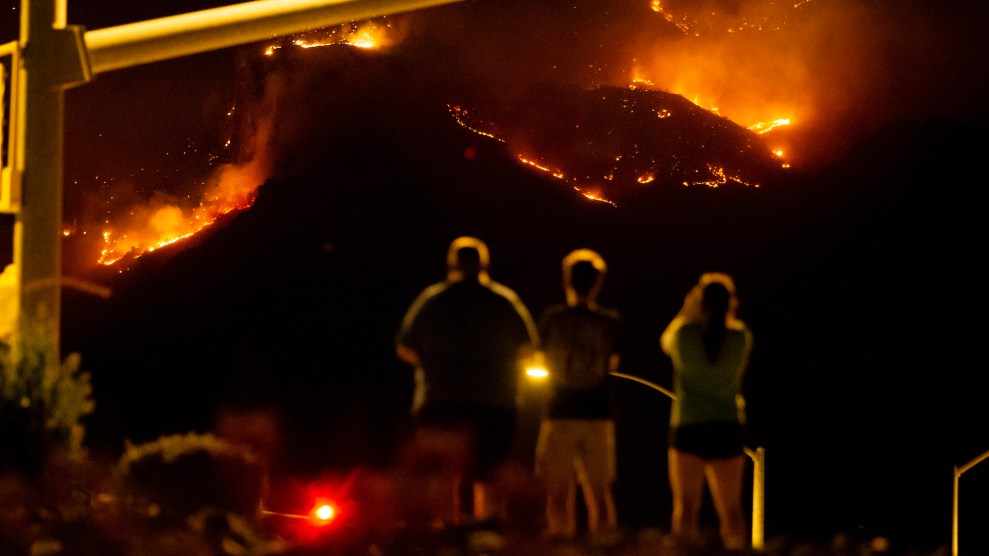 Arizona’s Bighorn fire, which began smoldering June 5 after a lightning strike, has grown to more than 6,200 acres and is tearing through the suburb of Catalina Foothills, about 10 miles from Tucson. Residents in the area face evacuation orders, with 7,400 homes at risk.

The United States faces an extreme weather season like we’ve never seen before. Scientists predict an extraordinarily hot summer, one that could put 2020 on track for the hottest year ever. These are the perfect conditions for out-of-control wildfires. And we’re going to see many more of these fires throughout the summer and fall: The National Weather Service issued red flag warnings for California, Nevada, Arizona and Utah on Friday, meaning the states experiencing the dry and warm weather conditions that could turn a small fire into a devastating one.

Last month, I attended a workshop for journalists about covering wildfires. Jim Whittington, a crisis communications expert in wildfire management, warned us about the unprecedented challenge of a big fire year “influenced by climate change in the middle of a global pandemic.” He was right: Arizona is now facing a significant second wave of coronavirus infections, as COVID-19 hospitalizations rose 49 percent from May 26 to June 9, the second-biggest jump in the country. The state reopened May 15, and the trouble began a few weeks later: Cases rose from 200 a day in late May to more than 1,400 a day this week. “After the loosening of some restrictions, we are now seeing a surge in hospitalizations, a surge in ICU usage and of course, unfortunately, a surge in the death rate,” Matthew Heinz, an internist at Tucson Medical Center, told ABC News this week.

The pandemic adds a major new burden to an emergency response system that was already stretched thin. After natural disasters, FEMA is supposed to help evacuate people and coordinate the distribution of supplies like masks, food, and water. But the agency is already strained by the COVID-19 crisis, having headed into it with leadership vacancies and staff shortages. Meanwhile, the Trump administration has hamstrung the agency with insufficient budgeting and staffing: In 2018, the president diverted $10 million from FEMA’s budget to fund Immigration and Customs Enforcement. I explained:

FEMA has suspended its pre-hurricane season in-person training sessions to comply with social distancing guidelines—and this comes on top of a  longstanding problem of training deficits: In 2018, the independent Government Accountability Office knocked FEMA for having insufficient training and information provided to staff in the field, particularly that “FEMA staff in all 14 of our focus groups cited issues with personnel who were deemed ‘qualified’ but didn’t have the skills to effectively perform their jobs, which affected disaster assistance.” On top of the training issues, FEMA’s union said it headed into the pandemic with 20 percent of its 5,000 full-time positions vacant.

As states slash their budgets in the economic fallout of COVID-19, it’s unlikely they’ll be able to make up for the lack of skilled federal disaster assistance. California, the largest economy in the United States, has a robust wildfire budget for now—through June. When the new budget kicks in though it may be an entirely different story. The state’s early COVID-19 efforts cost $7 billion already, so budget shortfalls will make it harder to maintain its robust wildfire prevention.

And now, in Arizona, FEMA and first responders have to rewrite their playbook. People fleeing their homes need to be socially distanced, instead of cramped in the mass shelters the agency typically uses. Firefighters typically camp at dense camp sites and eat together in a mess hall, but now they will be broken down into smaller units, treated like a family isolating together, to reduce the risk of COVID-19 spreading.

Smoke is also a bigger problem than ever before. Wildfires produce fine particulate matter that harm the lungs, and, as we’re learning, that damage could exacerbate symptoms of COVID-19.

“I think there’s a petty good argument that during the pandemic, smoke will be the greater danger than flames,” Whittington said. That’s because certain fire suppression tactics that make for easier social distancing—like using more helicopters—can create a lot of smoke. “If we protect firefighters on one end, there’s a chance that creates more smoke for communities on the other. There’s also the really good chance that no matter what we do, we’re going to have smoke for wildfires and communities. It’s going to be a tough deal.”

Reporting for this story made possible in part by a workshop by the Institute for Journalism & Natural Resources.