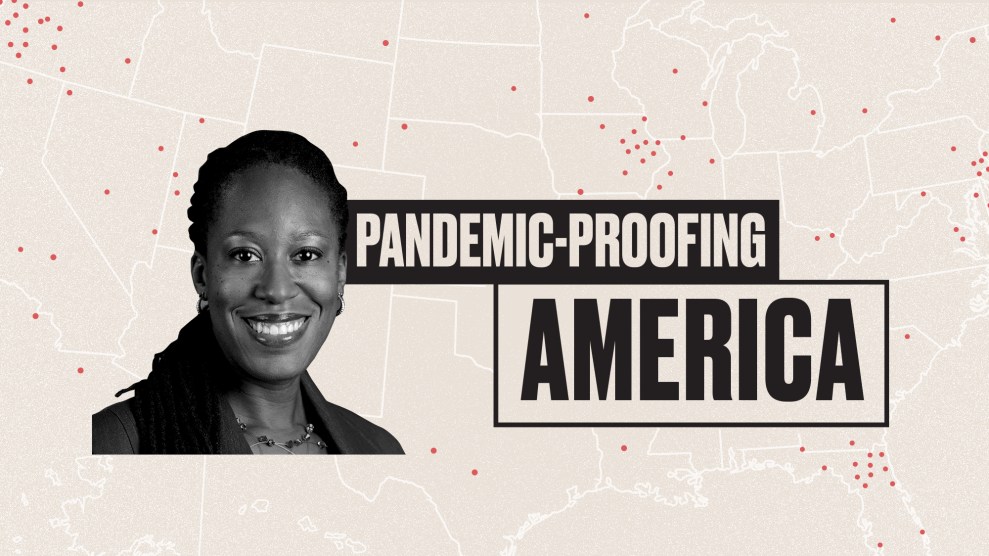 As the world grapples with the devastation of the coronavirus, one thing is clear: The United States simply wasn’t prepared. Despite repeated warnings from infectious disease experts over the years, we lacked essential beds, equipment, and medication; public health advice was confusing, and our leadership offered no clear direction while sidelining credible health professionals and institutions. Infectious disease experts agree that it’s only a matter of time before the next pandemic hits, and that could be even deadlier. How do we fix what COVID-19 has shown was broken? In this Mother Jones series, we’re asking experts from a wide range of disciplines one question: What are the most important steps we can take to make sure we’re better prepared next time?

Christina Hemphill Fuller is an environmental exposure scientist and epidemiologist focused on the intersection of air pollution, public health, and racial justice. Her expertise has taken on even greater relevance as the Centers for Disease Control and Prevention has confirmed that Black and Latino communities have experienced some of the worst effects of COVID-19, being three times as likely to become infected as white people, and nearly twice as likely to die. The Georgia State University professor says it’s not a coincidence that these communities also face more pollution in their daily lives, which makes them more vulnerable to a range of health problems, including lung damage. Fuller’s area of specialty is in a type of air pollution called ultrafine particles, which can lodge deep in the lungs and could make people more likely to experience severe effects of COVID-19.

People who live in places where air pollution is low are more resilient when they’re exposed to the virus, and they’re less likely to have severe COVID-19.

It’s definitely known that air pollution, particularly particulate matter, is associated with poor health outcomes. Air pollution many times concerns PM2.5—particulate matter as less than 2.5 microns in diameter—and also ozone. And both of those are regulated by the Clean Air Act.

On why Black people are disproportionately affected: There are many studies that have documented that communities with more Blacks or Hispanics have higher air pollution, and that’s because industries are placed there on purpose. The first study to talk about that was Toxic Waste and Race, way back in 1987, and updated in 2007. This study looked at hazardous waste facilities all around the country and found that the most important predictor was race, and the second was income.

In rural areas, traffic may be less of an issue, but you have other types of industry and power generation still disproportionately in communities of color.

For COVID-19 there are a couple of studies that have come out—one is the Harvard study by Dr. Francesca Dominici of Harvard: If you have high exposure to air pollution, is that going to increase your risk of contracting COVID 19 and having worse outcomes?

What we’re concerned about is susceptibility: When your lungs already damaged by having chronic exposure to particulate matter, then you’re going to be more susceptible to other diseases versus if you were just exposed to that disease, and your lungs weren’t already damaged.

People who are living in areas where the air pollution is high already had damage and they actually are having worse health outcomes versus people who live in places where air pollution is low, who are more resilient when they’re exposed to the virus and they’re less likely to have severe COVID-19.

On the problem of ultrafine particles: Air pollution is such a mix of chemicals, and we only monitor for a few, and then we regulate for even fewer. Particulate matter are either solid or liquid droplets suspended in air and we regulate for those that are smaller than 2.5 microns, and smaller than than 10 microns. The EPA monitors for PM2.5 and PM10.

The Clean Air Act is wonderful and has led to many positive changes, but the EPA still may not tell you what’s outside of your house.

But a particular one that I study is called ultrafine particles, and those are less than 100 nanometers in diameter. There is no regulation around that. Over recent years, the studies have shown that ultrafine particles are really, really important for public health. And you have to measure for them specifically.

If you put a PM2.5 monitor next to a busy highway, you’re not going to detect the really small particles. You’d have to monitor those specifically and those are really high next to roads.

They potentially are more damaging than PM2.5, because they are very small. They have a lot of surface area where lots of other chemicals can stick to. And then they can go down deeply into your lungs all the way where you actually have the gas exchange between oxygen and the air to your body. So they can get very deep into your lungs and causing damage there is a lot worse than causing damage in the upper airways.

If you count the number of particles that are in urban air, about 90 percent of them are going to be ultrafine particles. They’ve been linked to heart disease, cancer, asthma, other respiratory diseases, Chronic Obstructive Pulmonary Disease, and preterm birth. And they’re not being captured right now in our regulatory system.

On the big changes our leaders could make to cut pollution before the next pandemic: We need to maintain and strengthen our environmental laws and regulations: Over 100 regulations have been rolled back in the last three years. We need to have our elected officials stop permitting these facilities to be in communities color, and to be highly concentrated. If you map these polluting facilities, they are clumped up in different areas, and those areas are low income communities of color. We know that there’s an issue, but we’ve got to do something about it.

In relation to the built environment, we can change how we design our cities, as more of us are moving into cities. We should have cleaner buildings, achieving zero carbon or as close to that as possible, buildings that are energy efficient, and buildings that have green roofs. There are places in Europe and in other countries that are having car-free days, making different roadways into pedestrian-only and doing more to encourage biking and walking. Those are structural things that need to be done.

A few cool hacks we can use in the meantime: There are more tools people can use to understand pollution in their neighborhoods. If you make it really personal to them, they are more likely to support changes.

Usually when they’re picking sites for compliance with the Clean Air Act, they’re putting monitors in what we call urban background locations. Those are locations that are far away from some of the major sources, so it’s going to be the lowest concentration in the urban setting.

There are some lower-cost air pollution monitors that do a pretty good job of measuring air pollution. People can buy them for a couple hundred dollars and see what it is by their house. The Clean Air Act is wonderful and has led to many positive changes, but the EPA still may not tell you what’s outside of your house. And so if we’re able to get more people monitoring outside of their houses, then they will have more knowledge about what air pollution is. That’s really important for communities of color that are already have really high air pollution. They can show their elected officials, “Hey, the pollution here is really bad. And it’s affecting us: our asthma rates are high.”

We really need to empower people to have knowledge and to advocate for themselves. That’s really important.

With traffic pollution, in particular, in areas where we can’t necessarily remove a highway, we could reduce the impact that it has on the neighboring communities by putting in a barrier of trees there. It’s not only that green environments are wonderful for mental health, but they also can reduce the pollution that is coming off that roadway and affecting people who live next to it. There’s thousands of schools across the country that are right next to highways, and kids are playing outside next to the road. But if we’re able to put something there like a tree barrier, they actually have been shown to reduce pollution. That’s a study that I’m doing right now figuring out in the southeast, in Atlanta in particular, what that can look like to get the most benefit.