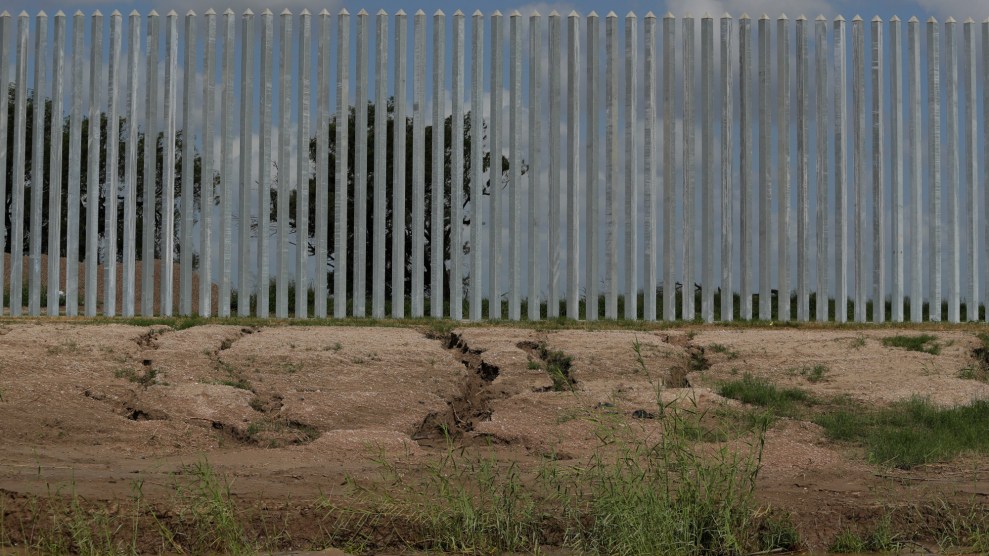 Intense rain over the weekend from Hurricane Hanna left gaping holes and waist-deep cracks on the banks of the Rio Grande that threaten the long-term stability of a privately funded border fence that is already the focus of lawsuits over its proximity to the river in South Texas.

The damage comes at the start of what is projected to be an active hurricane season, which runs through Nov. 30.

Engineering experts who reviewed photos of the jagged cracks caused by the weekend’s storms said the damage reinforces what many have long said: Building and maintaining a border fence so close to the river poses serious challenges.

“It’s going to be a never-ending battle. You are always going to be fighting erosion when you are that close to the river.”

ProPublica and The Texas Tribune previously reported that just months after completion, the private fence built by Fisher Industries, a North Dakota-based company, was showing signs of erosion that threatened its stability and could cause it to topple into the river if not fixed.

“It’s going to be a never-ending battle. You are always going to be fighting erosion when you are that close to the river,” said Adriana E. Martinez, a professor and geomorphologist at Southern Illinois University Edwardsville who has studied the impact of the border barriers in South Texas.

The 3-mile stretch of bollards along the river south of Mission, Texas, was a showcase project by Fisher Industries’ CEO Tommy Fisher, who put up more than $40 million of his own money to prove to the Trump administration that the private industry could do what the government hadn’t been able to: build the border wall right along the river.

Fisher, who subsequently secured $1.7 billion in federal contracts to build segments of the border fence, says that kind of erosion is to be expected given the amount of rainfall and the fact that the grass it added has not grown in that area by the fence.

But even before Hanna, photos revealed large gashes at various points along the structure where rainwater runoff had scoured the sandy loam beneath the foundation, which experts told ProPublica and The Texas Tribune shouldn’t be happening.

Those spots only worsened after Hanna pounded Mission with about 15 inches of rain. Photos taken after the hurricane show a series of gullies and rills along a section of the fence that extend like deep veins toward the river. In some areas, there are holes more than 10 feet wide that expose the footing.

“The damage to the soil underneath the fence after Hanna is far worse than what we saw from the photos from the big rain events from a month or so ago,” said Alex Mayer, a civil engineering professor at the University of Texas at El Paso who has done research in the Rio Grande basin.

With two or three more storms like Hanna, he added, the holes could expand to the point where the soil underneath, without support, would collapse.

Flooding and erosion concerns are some of the main reasons why the government has not built a border fence directly on the banks of the river.

With two or three more storms like Hanna, he added, the holes could expand to the point where the soil underneath, without support, would collapse.

The Rio Grande, which here serves as the boundary line between the U.S. and Mexico, floods periodically. In 2010, Hurricane Alex caused widespread damage along the banks of the river, including at the National Butterfly Center, just upriver from Fisher’s fence.

Fisher, who has claimed he was building the “Lamborghini” of walls, said his fence was designed specifically for the water to hit the paved road, go through the spaces between the bollards, irrigate the grass below and trickle into the river.

He points to another segment of the fence where there’s more grass, and, he says, less erosion, as proof that his design works. “Once the grass is established, bring all the rain you want, bring on 50 inches,” he said.

But the road behind the fence is part of the problem, Martinez said. It acts like a parking lot, where the pavement accelerates the flow of the water downward, in this case, toward the river, eroding the sand and silt banks over time.

Fisher said he plans to do quarterly inspections, as well as extra checkups after large storms. His crew will also refill the areas that have eroded with more soil and reseed the bald spots. If that is not enough, it will add a fabric that binds the soil or rocks.

This month, U.S. District Judge Randy Crane instructed attorneys to work out details of an inspection of Fisher’s fence and to come to an agreement about fixes for a section that violates a treaty with Mexico by deflecting too much water during floods. The inspection is set to take place Monday.

Crane is overseeing a lawsuit brought by the federal government and the neighboring National Butterfly Center over construction of the fence and its potential threat to the Rio Grande.

The ProPublica/Texas Tribune story prompted President Donald Trump to claim the project had been done to make him look bad. “I disagreed with doing this very small (tiny) section of wall, in a tricky area, by a private group which raised money by ads,” Trump tweeted on July 12.

That same day following Trump’s comments, U.S. Attorney Ryan Patrick of the Southern District of Texas called the private wall a “vanity project” and a “scam.” His office sued Fisher Sand and Gravel and its subsidiaries on behalf of the International Boundary and Water Commission, a binational body that regulates development in the floodplain between both countries to ensure boundary treaties aren’t violated.

“We said it was too close to the water, erosion would be an issue, the location made no sense,” Patrick said. “Now we risk the thing falling down in a big storm/flood.”

We Build the Wall founder Brian Kolfage took to Twitter on Sunday to defend the project after Hanna struck, claiming there had been no additional erosion, saying it was all fake news and that the wall “is going nowhere suckers.” A since-debunked viral video claimed to show a part of the border wall falling over during the storm, but it was actually from a construction site near Deming, New Mexico.

Fisher has claimed he was building the “Lamborghini” of walls.

The conservative nonprofit, which counts former Trump political strategist Steve Bannon as a board member, has raised more than $25 million to help Trump build his wall along the southern border and contributed $1.5 million toward Fisher’s South Texas project.

For Javier Peña, an attorney representing the National Butterfly Center, the amount of sediment that washed away over the weekend is “mind-boggling.”

“These banks that have taken hundreds if not thousands of years to form, and Fisher goes in there with his magic seeds and shaves away most of the bank claiming it will stop erosion and lo and behold the erosion is just exacerbated dramatically,” he said.