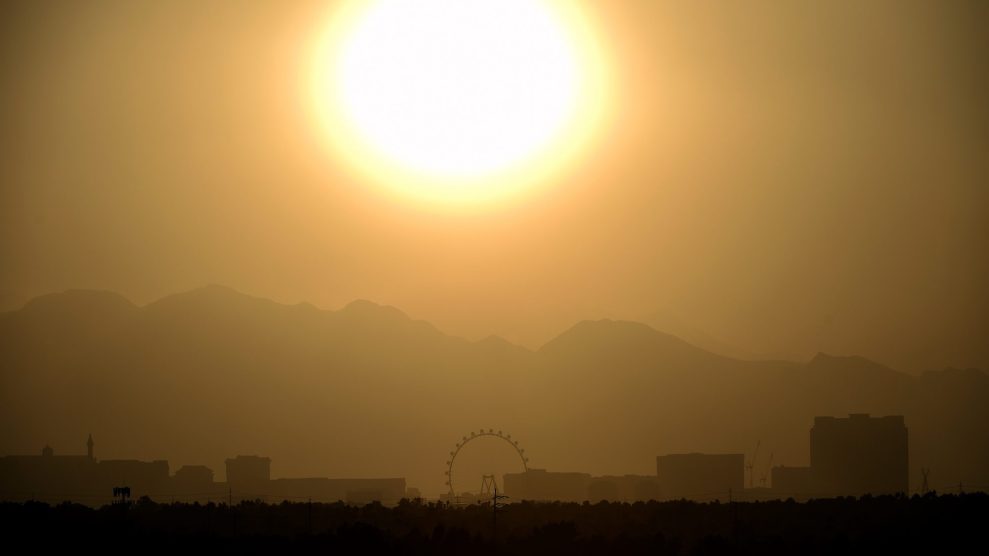 Smoke lingers in the skies as the sun sets over the Las Vegas Strip as a wildfire, dubbed the Mahogany Fire, burns in the Spring Mountains on June 28, 2020.David Becker/Zuma

The past decade was the hottest ever recorded globally, with 2019 either the second or third warmest year on record, as the climate crisis accelerated temperatures upwards worldwide, scientists have confirmed.

Every decade since 1980 has been warmer than the preceding decade, with the period between 2010 and 2019 the hottest yet since worldwide temperature records began in the 19th century. The increase in average global temperature is rapidly gathering pace, with the last decade up to 0.39 degrees Celsius warmer than the long-term average, compared with a 0.07 degrees Celsius average increase per decade stretching back to 1880.

The past six years, 2014 to 2019, have been the warmest since global records began, a period that has included enormous heatwaves in the US, Europe and India, freakishly hot temperatures in the Arctic, and deadly wildfires from Australia to California to Greece.

Last year was either the second hottest year ever recorded, according to Nasa and the National Oceanic and Atmospheric Administration, or the third hottest year, as recorded by the UK Met Office. Overall, the world has heated up by about 1 degree Celsius on average since the pre-industrial era.

“As this latest assessment comprehensively confirms, we have just witnessed the warmest decade on record,” said Michael Mann, a climate scientist at Penn State University. “As other recent reports confirm, we must act dramatically over this next decade, bringing emissions down by a factor of two, if we are to limit warming below catastrophic levels of 1.5 degrees Celsius that will commit us to ever-more dangerous climate change impacts.

“This is something every American should think about as they vote in the upcoming presidential election.”

The report, compiled by 520 scientists from more than 60 countries and published in the Bulletin of the American Meteorological Society, outlines the myriad ways that rising temperatures are altering the planet and human life, including:

Robert Dunn, a climate scientist at the UK Met Office, said that the start of this millennium has been warmer than any comparable period since the industrial revolution.

“A number of extreme events, such as wildfires, heatwaves and droughts, have at least part of their root linked to the rise in global temperature,” he said “The view for 2019 is that climate indicators and observations show that the global climate is continuing to change rapidly.”