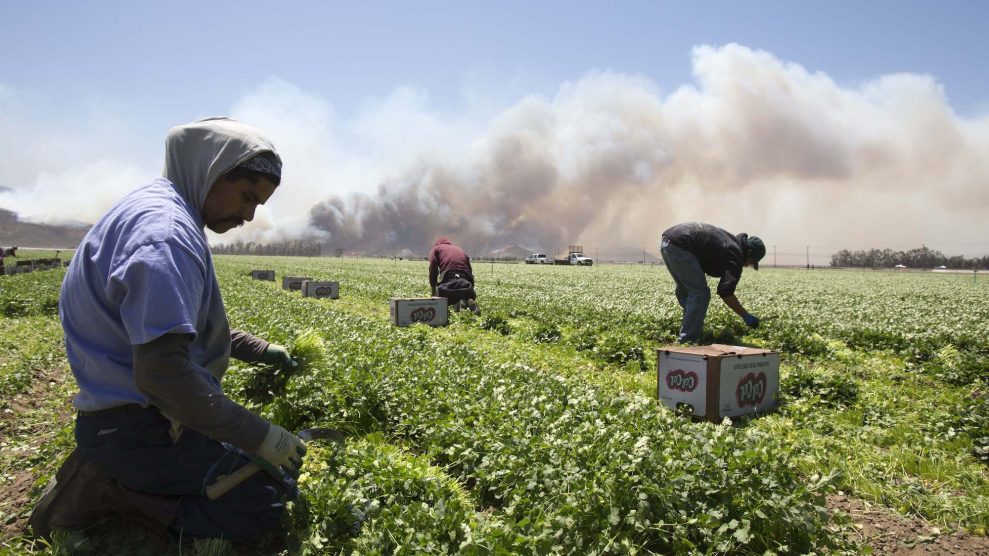 Farmers keep working as a wildfire on a hill burns in the background in Camarillo, Calif., Thursday, May 2, 2013.Ringo H.W. Chiu/AP

As fires consume more than 3 million acres across the Golden State this year, state and local governments are drawing on their experience responding to blazes over the past decade, which has seen year after year of massive wildfire virulence.

When the Thomas Fire hit California’s central coast nearly three years ago, it was then the second largest wildfire in the state’s history, raging for more than 40 days and scorching 440 square miles. The firefighting response and recovery efforts matched the fire’s intensity, with the largest mobilization of fire crews in California history. Recovery efforts were underway weeks before the blaze was contained.

“The fire crossed many jurisdictional boundaries and our recovery process would have to do the same thing,” Ventura County Executive Officer Michael Powers told the Ventura County Reporter during the fire. “The cities enthusiastically supported a unified approach and the result has been a streamlined, efficient and compassionate process.”

But that compassion did not necessarily extend to everyone. Researchers who studied the emergency response and recovery efforts during that fire have since found that a failure to direct resources to vulnerable communities, such as undocumented Latino and Indigenous immigrants, and farmworkers in particular, exacerbated existing inequalities. A forthcoming article for the academic journal Geoforum (now available to read online) concluded that emergency response and recovery efforts during the Thomas Fire ignored the needs of residents already facing racial discrimination, exploitation, economic hardship, language barriers, and a fear of deportation.

“While people claim that disasters do not discriminate, there are human decisions that make some populations more vulnerable than others,” said Michael Méndez, an assistant professor at the University of California, Irvine, who co-authored the article. “The big picture is understanding that systemic racism and cultural norms determine who is a worthy disaster victim.”

As climate change-fueled wildfires have raged throughout California this month, the state’s preparedness is being tested against the backdrop of a global pandemic that has already devastated communities of farmworkers whose work has been deemed “essential” for the duration of the crisis. Outbreaks in fields and food-processing facilities have rippled from workers to their families.

Another study, released by the California Institute for Rural Studies in July, found that the state’s farmworkers have lost work and wages during the pandemic and yet continue to be excluded from healthcare access and public assistance programs. In some cases, farmworkers experienced a drop of nearly 40 percent in work from April to June, that study found.

Méndez points out that the major fires, droughts, and heat waves that now regularly inundate California are foreseeable — meaning their outsized effects on vulnerable populations are predictable, too. During emergencies like the Thomas Fire, this information could have been used by policymakers and disaster relief organizations to prepare and assist these communities, such as undocumented workers who are unable to access government emergency resources because of their legal status. Instead, communities that were in dire need of recovery assistance were neglected and ignored, Méndez said.

“We routinely treat undocumented immigrants, and other marginalized groups such as the homeless, as less than human, as disposable,” the environmental planning and policy expert told Grist. “So intentionally we are not planning ahead of time for these most marginalized and stigmatized populations in our community.”

“We routinely treat undocumented immigrants, and other marginalized groups such as the homeless, as less than human, as disposable.”

A 2019 California state audit of Ventura, Butte, and Sonoma counties assessed how prepared each county was to protect vulnerable populations before, during, and after a natural disaster. It reached a similar conclusion to that of Méndez: The state auditor found that emergency officials overlook vulnerable populations by failing to adequately implement best practices, which in turn places residents “at greater risk of harm during future natural disasters.” For example, during the 2018 Camp Fire, the 2017 Sonoma Complex fires, and the 2017 Thomas Fire, none of the three counties sent evacuation notices in languages other than English, according to the audit. Since then, the counties have “taken some steps to follow best practices” but still haven’t fully implemented appropriate remedies, the auditor wrote.

As municipalities prepare for climate change-related disasters,conversations typically focus on protecting physical property and infrastructure—but they are rarely centered on people’s lives, according to Lucas Zucker, who co-authored the forthcoming Geoforum article on the Thomas Fire response. Zucker also serves as the policy and communications director at the Central Coast Alliance United for a Sustainable Economy (CAUSE), an organization that advocates on behalf of immigrant, Indigenous, and undocumented communities throughout Ventura and Santa Barbara counties.

Even before COVID-19 hit, climate change had already put the lives of farmworkers in danger. Seasonal weather fluctuations can cause these communities to lose work and expose them to multiple health threats, from extreme heat to wildfire smoke. Ultimately, those dangerous conditions become crises because populations are excluded from public assistance that could mitigate the harm stemming from this phenomena, said Zucker. Addressing root causes, such as the inability of many farmworkers to access unemployment insurance, could protect them as disasters multiply.

“What I hope is for policymakers, who are thinking about how to create a more resilient society in the face of climate change, to really think about the livelihoods of working people like farmworkers—to think about the inclusion of people like indigenous-language speakers,” Zucker told Grist. “That goes beyond measuring impact and dollar values to buildings.”

“The single biggest thing we can do to make our community more resilient to climate change for marginalized people is make sure everyone is covered in our safety net,” he continued. “That’s not the case in California, where you have one out of 10 workers being undocumented and not being included in the safety net.”

During the Thomas Fire, the void left by government agencies and disaster relief organizations was filled by community-based organizations and advocacy groups, such as CAUSE and the Mixteco/Indígena Community Organizing Project (MICOP) in Oxnard, according to Méndez. Organizations like these stepped in to help raise funds for those in need and advocate for worker protections, such as the use of N95 respirator masks in the fields to protect against dangerous air quality. They also pressed for long-term solutions such as a 2019 emergency state regulation requiring employers to distribute N95 masks to workers exposed to wildfire smoke or unhealthy levels of particulate matter. At the community level, this work transformed these organizations into key stakeholders in disaster response planning.

“While the COVID-19 pandemic is having disproportionate impacts on farmworker communities, migrants, and undocumented immigrants, in particular, it would be far worse had it not been for organizations like MICOP and CAUSE that were activated two years ago,” said Méndez.

At the state and local level, Latino policymakers and legislators in the state’s Latino caucus have also played a key role in pressing for a state disaster relief fund for undocumented workers affected by the pandemic. They have also called on Governor Gavin Newsom to issue local government guidelines aimed at protecting agricultural workers during the crisis.

“These advocates and Latino legislative caucus members have been able to really try to make these invisible populations visible to state and local governments,” said Méndez.

Méndez argues that the state needs disaster planning that addresses existing disparities in access to aid, including language barriers. Along the central coast, Indigenous immigrants hail from regions in southern Mexico and speak languages and dialects unique to those regions, such as the Mixtec language. Many of these Mixtec-speaking immigrants speak neither English nor Spanish, which makes communication about the COVID-19 pandemic an additional challenge—especially since there is no Mixtec word for virus.

“There are a lot of challenges that they face in their everyday lives that are even more glaring than [those faced by] undocumented Latinos. They… suffer multiple forms of discrimination because they’re Indigenous,” said Méndez. Addressing these disparities requires ensuring that Indigenous workers understand their rights in the workplace, are provided disaster relief information in their native language, and are offered aid that is accessible regardless of legal status, he continued.

Because this work is not happening consistently at the county level, Méndez suggests that the state should step up to provide these safeguards. While some state legislation has already been passed to pursue this goal—California’s Senate Bill 160 requires counties to integrate cultural competence into emergency plans—Méndez said that more laws mandating the inclusion of vulnerable populations in disaster planning are needed, along with resources, education, and collaboration with community groups.

Existing laws and regulations must also be better enforced, especially in agricultural fields, according to Zucker. In Ventura County, CAUSE saw improved compliance with workplace protections around wildfire smoke during the Woolsey Fire, which came just a year after the devastating Thomas Fire. Currently, however, N95 masks are difficult to obtain because of the COVID-19 pandemic, so as wildfires continue to stretch resources across the state, organizations like CAUSE are monitoring the situation with apprehension.

“My sense is that a lot of growers are not prepared for this fire season, and once the Santa Ana winds come, we are heading into a real disaster if we have more major wildfires where we just don’t have the protective gear ready,” said Zucker. “As those temperature extremes become worse and those weather extremes and disasters become worse, that problem becomes wider and wider and wider.”