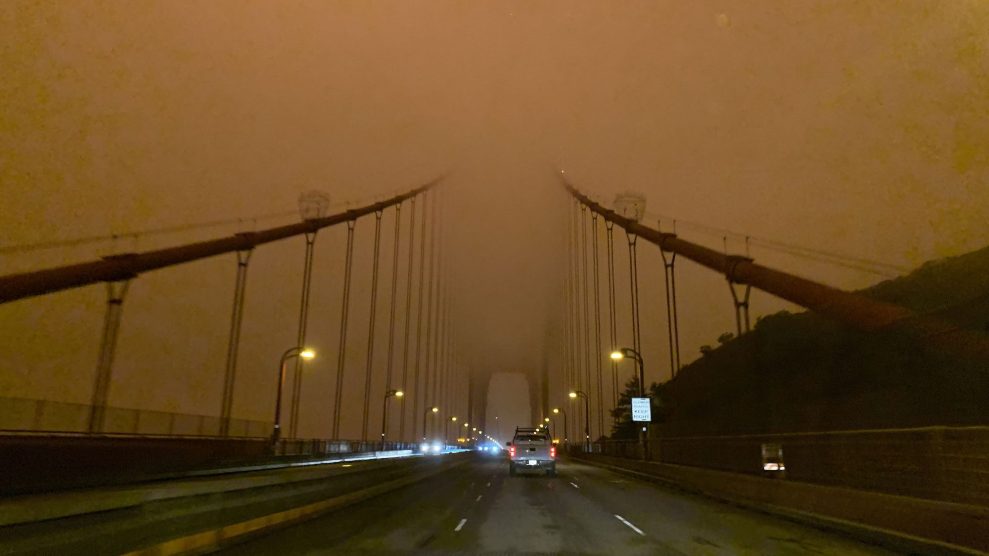 People in the San Francisco Bay Area and across California awoke on Wednesday morning to an eerie scene of darkened, orange-hued skies and ash raining down as historic wildfires rage across the state.

The apocalyptic skies are due to light being filtered through smoke from California’s worst fire season on record, according to a regional air pollution control organization the Bay Area Air District.

Residents of the Bay Area reported oversleeping because the sky was so dark. Local police forces recommended drivers keep headlights on all day and bridges and street lights remained alight as the sun failed to appear this morning.

Driving across the Golden Gate Bridge at 9:20 IN THE MORNING. pic.twitter.com/nyiY0vWxf5

It's noon in San Francisco. pic.twitter.com/id1qZ7rfr3

The skies appeared orange not only in San Francisco but as far north in the state as Eureka. Skies were also reddened across the area near the city of Chico, where the Camp fire tore through in 2018, decimating the town of Paradise. Part of Paradise was under an evacuation warning Wednesday as the fast-moving Bear fire burned through foothill communities and near the city of Oroville.

The science behind the hue has to do with the way smoke affects what kind of light can get through. The sky is usually blue because white light from the sun, which is a composite of all visible colors of light, is filtered through gases and particles in the Earth’s atmosphere. Blue light is scattered more strongly than other frequencies, making the sky appear blue.

But when smoke particles and other pollution enter the atmosphere, much of the blue light is absorbed before it can reach our eyes, allowing only yellow, red and orange light to reach the surface. Smoky air also means much of the sun’s light is blocked or absorbed before reaching the surfacing, making it unusually dark during the daytime.

The National Weather Service said conditions could worsen throughout the day.

“As the winds weaken aloft, gravity will take over as the primary vertical transport of the smoke,” it said. “Suspended smoke will descend closer to the surface and could lead to darker skies and worsening air quality today.”

Despite the scary-looking skies, the actual quality of the air close to the ground was surprisingly good on Wednesday. That’s because high winds are keeping the smoke at a high altitude of around 2,000 to 4,000ft above ground, according to the National Weather Service, preventing it from settling at the surface. San Francisco is additionally protected by its famous fog, which is creating a layer of protection between the ground and the smoke.

Ralph Borrmann, a spokesman for the Bay Area Air Quality Management District, said conditions were expected to remain until Friday.

Air quality warnings were issued throughout the Pacific Northwest, where more than 85 significant fires are currently raging, and people in communities from southern Oregon to north of Seattle have seen blood red skies and choking smoke.

“It was scary. Especially as red as the sky was,” said Patricia Fouts, who evacuated from a senior living center due to a massive fire east of Salem, Oregon.

Roger Gass, a meteorologist with the National Weather Service Bay Area, said winds coming from the Pacific Ocean will likely continue to push the smoke across the west, worsening air quality.