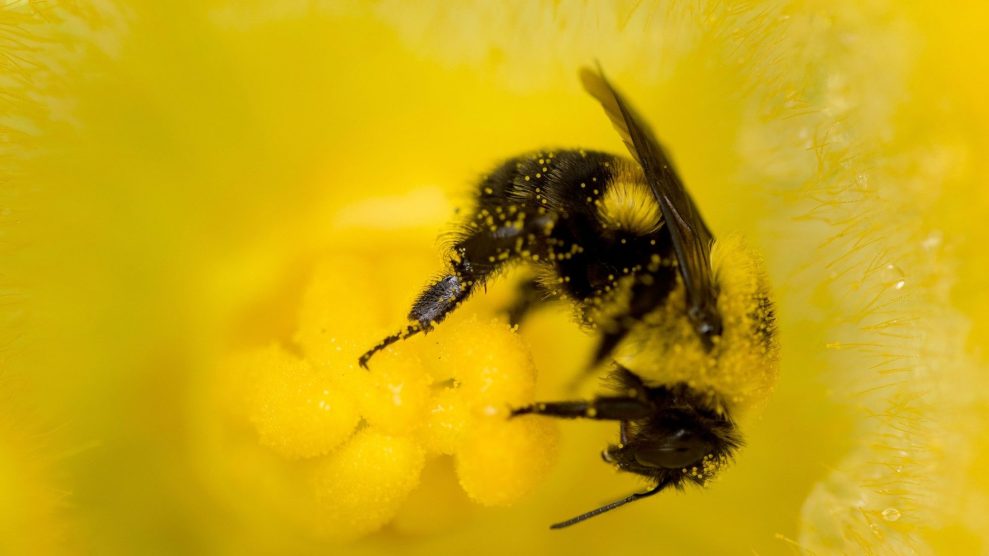 The Delta, British Columbia, farmer is not alone. Blueberries, raspberries, and tree fruits are some of BC’s most important crops, worth about $370 million combined—and they all depend on bees, butterflies, moths, and other pollinators for a successful harvest.

“Pollination is always a struggle,” said Bates, who owns a 90-acre blueberry farm.

That’s no surprise. Pollinators are in rough shape in British Columbia and beyond.

The International Union for the Conservation of Nature says that 16.5 percent of vertebrate pollinators (e.g. birds) are threatened with global extinction.

In Europe, nine percent of bee and butterfly species are threatened, and about a third of their populations are declining.

And in North America, bumblebees—a vital native pollinator—are estimated to have seen their relative abundance crash by 97 percent, with the sharpest decline occurring in the past 30 years.

It’s a shocking decline, one driven by widespread pesticide use and habitat loss—byproducts of industrial agriculture. That system dominates North America’s fields and relies heavily on chemical fertilizer, pesticides, and monocrops.

“A number of features of current intensive agricultural practices threaten pollinators and pollination,” notes a 2016 report by the FAO Intergovernmental Science-Policy platform on Biodiversity and Ecosystem Service.

“A number of features of current intensive agricultural practices threaten pollinators and pollination.”

That’s not good news for bees—or farmers. About 85 percent of food grown globally depends on pollination, and in BC, bees and other pollinators contribute about $538 million ($410 million USD) to BC’s agricultural industry.

Faced with declining bee populations, Bates and other farmers who rely on pollination have turned to semi-domesticated honeybees to pollinate their crops. They hire commercial beekeepers to truck several hundred hives of honeybees into their fields while the crops are flowering.

There are about 5,600 commercial beekeepers in Canada who operate roughly 480,000 colonies.

Once the field has been pollinated and the flowers turn to fruit, the beekeeper will pack up the hives, moving them to the next flowering crop, which is sometimes thousands of kilometers away.

It’s not an ideal system.

“When you have these very large and very simplified farms, farmers become reliant on bringing out these honeybees,” said Claire Kremen, a professor of conservation biology at the University of British Columbia who is leading a research project to increase pollinator habitat on farms in Delta, BC in collaboration with the Delta Farmland and Wildlife Trust.

The project aims to encourage farmers to plant some of their fields with pollinator-friendly flowers or to build hedgerows.

“It’s like honeybees are a kind of input to the farming system that needs to be purchased or supplied, whereas formerly, (pollination) was there and available.”

Beyond the cost of renting honeybees—Bates pays about $50,000 ($38,000 USD) each year for roughly 425 hives—Kremen pointed out that they aren’t really up to the job.

Native bumblebees are better: They’re happy flying through the fields when it’s cold or rainy and have a trick to get pollen out of blueberries’ deep bell-shaped flowers.

“The bumblebee will grab onto the flower with their legs and, literally, they vibrate with their wings and it shakes the flower. And it happens that they do it at just the right frequency that it makes the pollen come out.”

But bumblebees, unlike their semi-domesticated cousins, don’t live in hives that are trucked around the country.

They stay in one place, rarely straying more than 10 kilometers from their hive, and need food throughout the year—not only for the few weeks blueberries are flowering.

Those habitats that don’t come cheap in BC’s Lower Mainland.

“With land costs, (farmers) really need to farm most of their acres. Without actually knowing the economic benefits (of more pollinator habitat), it’s hard to justify taking land out of production.”

That’s where Kremen’s research, which is supported by a $161,050 ($123,000 USD) provincial-federal grant, comes in. The project aims to put a dollar value on native pollinators’ contribution, helping farmers weigh the cost of investing in hedgerows and other pollinator-friendly habitats against bringing in honeybees and having more acreage under production.

There’s already evidence from other places that increasing pollinator habitat might, in fact, be a boon to farmers.

“You could see increases in yields anywhere from $8,000 per hectare to $14,000 ($6,093 to $10,665 USD) per hectare,” Bondar said, citing studies that have determined the costs of pollination deficits—crops lost to bad pollination.

About a million species are currently threatened with extinction globally and are going extinct at a rate up to hundreds of times faster than the average established over the past 10 million years.

Still, in 2019, the UN Intergovernmental Science-Policy Platform on Biodiversity emphasized the importance of “promoting good agricultural and agroecological practices … and more integrated landscape and watershed management.”

Those include the kinds of management practices Kremen hopes her research project will help make more common.

For Bates, whose blueberry farm is home to some plots in the study, those benefits have already started to arrive—even without unionized bees.

“You go in the fields late at night, and you stand and watch and listen, and the bumblebees are still working.”