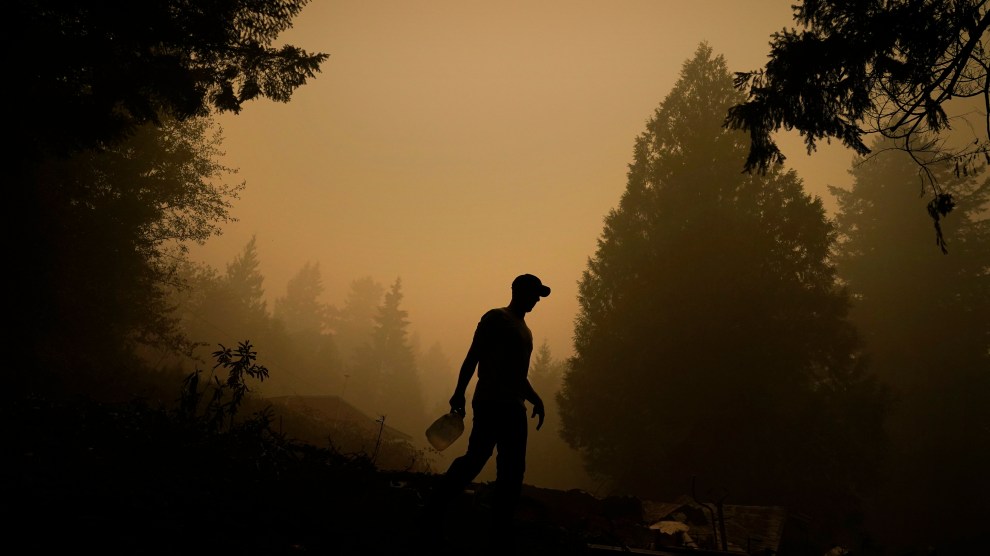 Aaron Cleys holds a jug of water he was using to douse hot spots at a home destroyed by the the Riverside Fire on Friday, in Estacada, Ore. AP Photo/John Locher

Over the past week, at least 19 people have died in massive wildfires ravaging the West Coast. In total, at least 26 have died this year. Now, tens of thousands are facing evacuation orders in Oregon due to encroaching fires (the exact number remains unclear, reports the Oregonian).

There are now almost 70 active fires in the area, generating the worst air quality of any region in the world right now, across areas including San Francisco, Portland and Seattle.

Oregon alone has been hit with 37 of those fires, burning over 1 million acres across the state.

State emergency management director Andrew Phelps told the Guardian that Oregon officials were “preparing for a mass fatality incident based on what we know and the numbers of structures that have been lost.”

Late on Thursday, the White House approved Oregon’s emergency declaration and will provide federal assistance through the Department of Homeland Security and the Federal Emergency Management Agency. Oregon Governor Kate Brown also issued an executive order to stop price gouging in response to reports that prices were spiking for high-demand goods and services like lodging.

“During a statewide emergency, it is absolutely unacceptable to price-gouge Oregonians who have already been hard hit and are facing devastating loss,” Brown said in a statement Thursday.

While Oregon is currently baring the brunt of the fires, California is also still reeling. The state declared a state of emergency Thursday for Siskiyou County, where the Slater Fire had burned 140,000 acres.

Even though the White House approved federal assistance this week, for the first three weeks of the fires raging, Trump didn’t publicly acknowledge the fires in the three states (none of which voted for him in the 2016 election.)

“THANK YOU to the 28,000+ Firefighters and other First Responders who are battling wildfires across California, Oregon, and Washington,” Trump finally tweeted on Friday night. “I have approved 37 Stafford Act Declarations, including Fire Management Grants to support their brave work. We are with them all the way!”