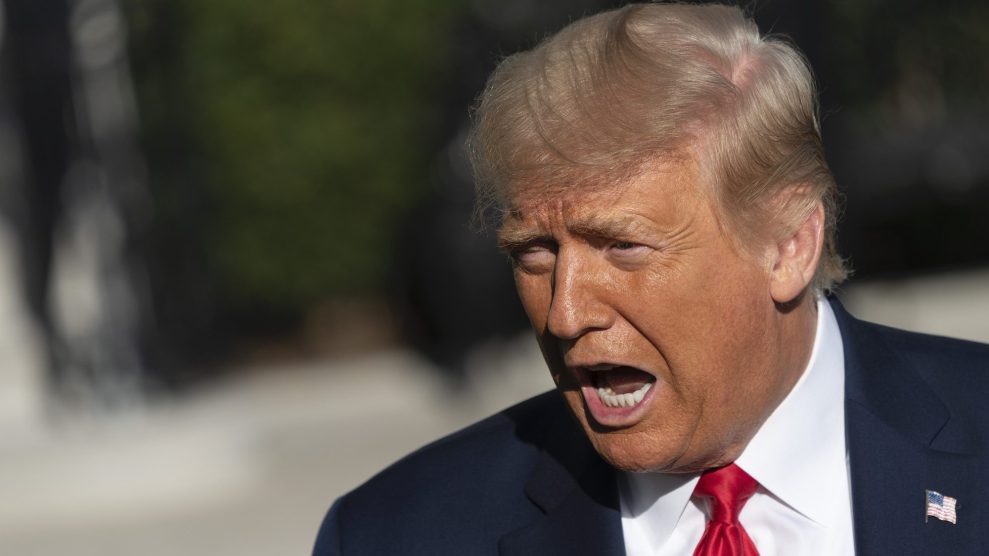 This piece was originally published in Bulletin of Atomic Scientists and appears here as part of our Climate Desk Partnership.

Donald Trump has said, several times in the week up to and including September 29’s presidential debate, that he will not commit to a peaceful transfer of power should he lose the election in November. He said this in 2016, and it was frightening then. It is incomparably more frightening now, when he has the power of the presidency at his disposal, and when a Republican party that controls most of the levers of power has shown no inclination, now or in the last four years, to check his abuses of power. The President of the United States is telling us clearly that he has no respect for the most fundamental principle of democracy.

A few days after the debate, the White House revealed that Trump had contracted COVID-19. This was clearly a consequence of his disregard of the scientific consensus that masks and social distancing are necessary to prevent the spread of the novel coronavirus. Trump himself may survive the virus, but 210,000 other Americans have not. There is no doubt that a substantial fraction of those lives could have been saved by responsible leadership from the president.

Trump’s hostility to science is manifest not just in the administration’s denial of the facts and his suppression of scientists’ voices on climate, COVID-19, and other issues of life and death. In his words and actions, he rejects even the ideal of science as a search for truth. The president believes he can make reality conform to his desires just by speaking them.

His hostility to democracy—one that now seems to be shared by his party in its entirety, as it pursues victory through voter suppression and misinformation—springs from the same source.

Philosophers and historians of science have shown that the scientific method isn’t what many of us were taught—that is, devising hypotheses about nature, testing them by experiment, and thereby determining the absolute truth. Instead, science is a social process—somewhat like democracy.

Philosophers and historians of science have shown that the scientific method isn’t what many of us were taught.

Over time, following some broad principles, scientists in a given field reach agreement on methods and standards for generating evidence and evaluating it in a collective search for an understanding of some set of phenomena in nature. The specific methodologies that result will differ from one field of science to another, by necessity. Ecology can’t work exactly the same way that atomic physics does.

But if the process goes well, some scientific debates are eventually settled by consensus. History shows that when this happens, the results are reliable. At its best, science works: Diseases get cured, airplanes fly, we can have video chats with faraway relatives on our smartphones, we can forecast the weather, and so on.

The whole enterprise can only succeed, however, if and when there is a shared commitment to the underlying principles. Perhaps the most fundamental principle is that all participants have to legitimately want to know the truth, even if it turns out not to conform to our prejudices. In this, science is fundamentally different than the legal system, where an adversarial model is the ideal.

In science, our job is not to prove our opponent wrong at all costs, but to work together to search for truth. When we abandon that principle, science doesn’t work. In a healthy scientific community, one can’t win by grandstanding, threatening, or bullying.

On the scientific issues of greatest public import, the Republican Party has taken an increasingly adversarial stance over the last 40 years. Rather than accepting the scientific community’s collective judgment, it has sought scientists who say what it wants to hear—no matter how few or how lacking in credibility among their peers they may be—and chooses sowing of doubt over searching for truth. This erodes public trust in science while offering nothing legitimate in its place.

In my own field of climate science, the disinformation campaign has been going on for decades, to great effect. We climate scientists knew what “fake news” was long before the phrase was invented. With COVID-19, epidemiologists and public health experts have rapidly come to understand our predicament.

The Trump administration has gone even further, though, beyond sowing doubt. They have been eliminating science and scientists from the processes of government as quickly as possible. Rather than seeking scientists’ counsel, Trump seeks instead—with terrifying success—to convince his followers that the truth is whatever he says it is, without even the pretense of a need for evidence.

Democracy, too, is a set of shared principles and processes for reaching broad collective goals. There is inevitably disagreement, and the outcomes need not always be good. But over the long term, history leaves little doubt that it works better than any alternative.

Like science, though, democracy too is fragile, and for the same reason: It depends on adherence to a set of principles by all participants. Ultimately, that adherence is voluntary. If enough of the participants decide they don’t want to play any more, but would instead rather seize and hold power by any means necessary, constitutions and laws and historical norms may not be enough to stop them. The last four years have demonstrated this to a degree that Americans of my age couldn’t have easily imagined in our youths, even though the roots of it lie in the anti-government stance that started with Ronald Reagan in the 1980s and gained force with Newt Gingrich in the 1990s.

Now, with Trump’s refusal to commit to a peaceful transfer of power, we have a president and ruling party who reject of the most sacred of democratic principles. So it’s not a coincidence that they reject science too. Both science and democracy place abstract principles above the ambitions of any specific individuals or groups, and thus are in conflict with ideologies that boil down to us versus them.

Of course, this election is not just about abstract principles. It’s about life and death. A second Trump term would amplify the most severe existential risks humanity already faces.

By opposition to any action to reduce greenhouse gas emissions, Trump would worsen global warming. By withdrawing from historical alliances with other democratic nations in favor of greater friendliness to oppressive regimes, he would increase the risk of nuclear war. These will be true even if Trump wins reelection legitimately. But if he stays in power by subverting the election, US democracy as we know it will be over. And the harm that will result from that, domestically and globally, is even more difficult to reckon with.

While science and democracy have some things in common, there is at least one big difference. Science is ultimately about discovering and understanding the laws of nature. No human being, not even the most powerful one in the world, can change those. Trump thought he could make the pandemic go away by fiat, and reality proved him wrong in an undeniable way.

Democracy, on the other hand, is an entirely human construction. The laws of nature don’t guarantee its existence. Trump still believes he can make it go away; whether he turns out to be right or not depends very much on us. Please vote.