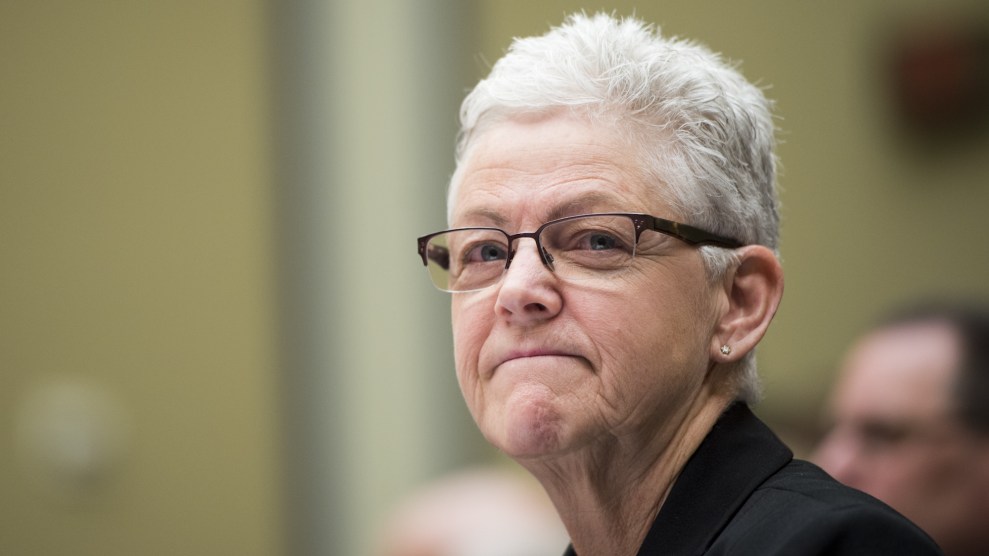 President-elect Joe Biden has tapped Gina McCarthy as his domestic climate czar, tasking the Obama-era Environmental Protection Agency chief with overseeing the new administration’s sweeping plans to overhaul the nation’s energy, agriculture and transportation systems and prepare for the hotter world to come.

McCarthy, 66, served as a chief architect of the Obama administration’s climate regulations, overseeing the drafting and passage of landmark limits on planet-heating pollution from power plants, vehicles and fossil fuel producers. Following a stint as a professor at Harvard University, she became the president and chief executive of the Natural Resources Defense Council, a lion in the environmental advocacy sphere that has sued the Trump administration more than 100 times to block environmental rollbacks, in January.

The Washington Post first reported the pick. A spokesperson for McCarthy did not immediately respond to a request for comment.

If confirmed by the Senate, McCarthy would serve as a domestic-side counterpart to John Kerry, the former secretary of state who, as Biden’s special envoy on climate, will oversee a 180-degree turn in U.S. diplomacy on such matters as rejoining the Paris climate accords and working with other nations to curb fossil-fuel emissions that are warming the planet.

“Every department in the Biden administration should be centering climate action and clean energy in their federal policies and investments,” McCarthy wrote in a tweet earlier this month. “And they should do it in a way that continues to advance labor interests and environmental justice in communities across the country.”

“Every department in the Biden administration should be centering climate action and clean energy in their federal policies and investments.”

McCarthy is widely respected in the environmental world and has inspired fierce loyalty among those who worked under her at the EPA. The Massachusetts native, with a thick Boston accent, worked in five Massachusetts Democratic and Republican administrations and served as commissioner of the Connecticut Department of Environmental Protection before joining the EPA in 2009. President Barack Obama named her EPA administrator in 2013, a position she held until President Donald Trump took office in 2017.

While Kerry will also advise the National Security Council on climate issues, McCarthy’s work will ostensibly respond to those warnings with long-overdue policy decisions that could shape the nation’s physical contours for generations to come. The reach and success of such efforts, though, may depend on whether Democrats can gain control of the Senate by winning next month’s runoffs for Georgia’s two seats. If not, the Senate’s GOP majority almost assuredly will work to thwart the administration’s environmental agenda.

Every department in the Biden administration should be centering climate action and clean energy in their federal policies and investments. And they should do it in a way that continues to advance labor interests and environmental justice in communities across the country. https://t.co/8D3HDP2Flm

By selecting McCarthy, Biden appears to be preparing to implement his climate agenda through executive fiat and regulations.

The priorities, he said, will be making good on Biden’s plan to eliminate power plant emissions by 2035 and transition to a carbon-neutral economy by 2050.

The last time anyone served as a domestic climate czar, Democrats controlled both chambers of Congress. In 2009, Carol Browner, who headed the Environmental Protection Agency under President Bill Clinton, served as Obama’s director of the newly established White House Office of Energy and Climate Change Policy. Two years later, she quit and the position was abolished following Democrats’ failure to pass a major climate bill through Congress and the GOP winning control of the House.

Since then, scientific projections of the speed and severity of global warming have grown significantly direr. The demands for policy remedies have dramatically shifted in response. In the early 2010s, the consensus in Washington on addressing climate change was that a price on carbon emissions, either through a cap-and-trade system or a tax, was the only viable solution to surging heat-trapping gases. Today, the climate movement ― now led most fervently by youth activists ― has rallied around the framework of a Green New Deal, a Word War II-style federal mobilization to rapidly and dramatically redirect key economic sectors to stem the warming.

Biden vowed a whole-of-government approach to curbing emissions and adapting the nation’s economy to that goal, rather than siloing the mission to the EPA, Interior Department and National Oceanic and Atmospheric Administration. The climate czar position is envisioned as the central coordinator in this approach.

Other possible names floated for the position included John Podesta, a top Democratic operative who has made climate his central issue in recent years; Jay Inslee, the newly reelected Washington governor who ran as the “climate candidate” in a brief bid for the 2020 Democratic presidential nomination; and Ali Zaidi, a climate policy expert and the Office of Management and Budget’s former associate director for natural resources, energy and science.

The 33-year-old Zaidi, the Post reported, will serve as McCarthy’s deputy.

McCarthy’s name had surfaced recently as a possible nominee to take over at the EPA again. Mary Nichols, the head of the California Air Resources Board, had been the front-runner. But criticism from activists that Nichols’ record as California’s top air regulator hurt Black and Latino communities appeared to tank her standing with the transition team, prompting a scramble to elevate alternative candidates, The New York Times reported this week.

“Gina McCarthy’s experience and perspective make her the right person to drive the whole government’s mobilization on climate,” Jamal Raad, campaign director of the climate group Evergreen Action, said in a statement. “Now it’s all hands on deck to defeat the climate crisis and rebuild a better economy.”