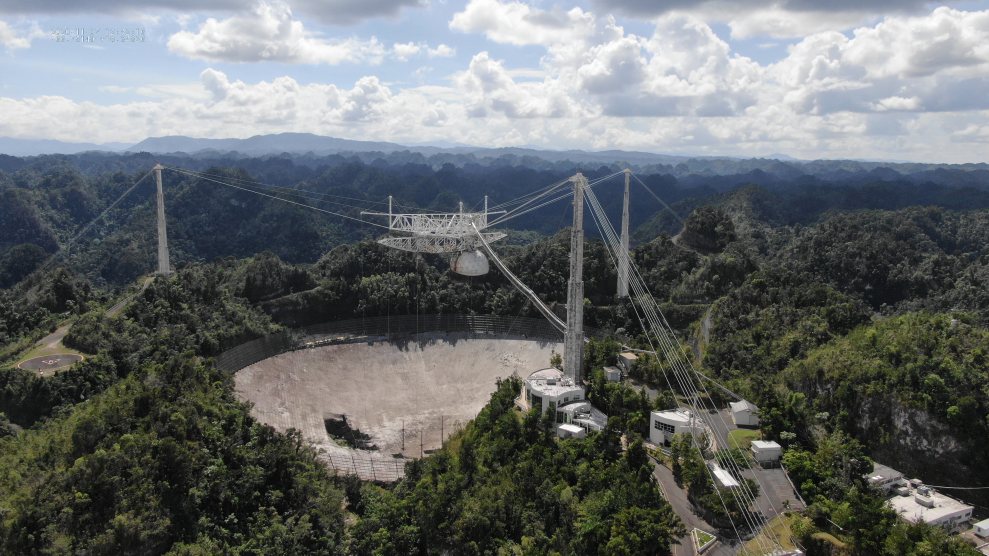 This story was originally published by the Bulletin of the Atomic Scientists and is reproduced here as part of the Climate Desk collaboration.

Losing the Arecibo Observatory radio telescope to the sands of time is sadly emotional for many. For scientists, it marks the end of an era. For Puerto Ricans, it’s a blow to our pride.

Daybreak on Tuesday, December 1 revealed that the 900-ton instrument platform of the Arecibo Observatory had collapsed. The National Science Foundation had previously established an exclusion zone for fear that this would happen, after some cables had snapped and the structure appeared to be in danger. So far, no injuries have been reported.

The instrument platform of the 305m telescope at Arecibo Observatory in Puerto Rico fell overnight. No injuries were reported. NSF is working with stakeholders to assess the situation. Our top priority is maintaining safety. NSF will release more details when they are confirmed. pic.twitter.com/Xjbb9hPUgD

The National Science Foundation had announced earlier, on Thursday, November 19, that it would  decommission and dismantle Arecibo. This radio telescope, for decades the world’s largest, had operated for 57 years, withstanding numerous hurricanes—the last one a Category 4 storm, Hurricane María, which in 2017 damaged the approximately 30 meter-long (about 100 foot), 430 megahertz radar transmitter that is suspended high above the thousand-foot wide dish (see photo). The radio telescope survived that incident, but later this year massive steel supporting cables came loose, gashed huge holes in the telescope’s reflector dish, and threatened the structural integrity of the supports for the suspended platform that held the receiver and transmitters.

Exactly why the first of the several cables holding up the platform slipped out of its socket has still not been pinpointed. It’s unclear if recent earthquakes have played a role; while a still-active earthquake sequence—in which many seismic events, including a mainshock, occur in a local area in a relatively short period of time—did significant damage in Puerto Rico over the past year, the shaking on the north side of the island where Arecibo is located was attenuated compared to the south and southwest areas closest to the epicenters. Regardless of what caused the first cable to fail, when it did break, it put excess strain on the others and caused a second cable to snap in half. Worried that additional cables may go at any time and lead to catastrophic failure, the National Science Foundation decided to close the Arecibo dish permanently in the latter half of November—and then the huge telescope, already damaged, collapsed on December 1.

The Arecibo Observatory was legendary. It was placed in Puerto Rico’s karst country because the unique soft limestone landscape—characterized by steep ridges and deep ravines—allowed for the nestling of a 300-meter (1000 feet) diameter spherical reflector collecting dish nicely into one of the U-shaped valleys created by sinkholes between haystack-shaped hills. The towers holding the instrumentation that’s suspended 150 meters above the dish were built on top of the surrounding karst ridges.

Pictures could do no justice to this spectacular engineering marvel. Puerto Rico’s radio telescope had been placed in the National Register of Historic Places. Its supporting role as a filming location for Contact with Jodie Foster and GoldenEye with Pierce Brosnan as 007 shined a popular culture spotlight on the observatory.

But Hollywood didn’t make the Arecibo Observatory famous. Science did.

In 1964, almost immediately after the observatory’s commissioning, planetary scientists studying Mercury discovered that it rotated every 59 days instead of every 88 days. A few years later in 1968, the first robust evidence that neutron stars existed was gathered at Arecibo. The first binary pulsar was first discovered there in 1974, leading to a Nobel Prize in Physics for the scientists spearheading the effort. And incredible phenomena have been detected, like a millisecond pulsar that rotates 642 times per second!

Like many tools of modern science, the impetus for building the radio telescope came initially from the military, which sought to monitor the ionosphere for the telltale signatures left by possible nuclear missiles reentering the atmosphere. Eventually designed for the dual purpose of ionospheric and astronomical studies under the direction of Cornell University—which operated the observatory until 2011—the unique beam-steering mechanism suspended high above the reflector dish allowed for a moveable focal point that could aim at different parts of the sky.

That functionality had continued to yield dividends in 2020. NASA’s Planetary Defense program was using the Arecibo radio telescope to precisely measure the size, shape, dynamics and orbits of Near-Earth Objects like asteroids that could potentially pose a threat to Earth. Even supermassive black holes were still being studied.

As a magnificent instrument of science, a source of so many discoveries, and as Puerto Rico’s scientific icon, Arecibo served as an inspiration to me and countless other aspiring scientists in Puerto Rico and around the world. Its visitor center hosted thousands of Puerto Rican schoolchildren for educational visits, and the Arecibo Observatory Space Academy provided teacher training workshops and allowed pre-college students to perform research.

It’s no surprise that since the National Science Foundation announced the dismantling of the Arecibo Observatory, the hashtag #WhatAreciboMeansToMe has seen hundreds of entries on Twitter. Statements like “definitely influenced me to pursue a career in the STEM field,” “Arecibo is the reason I am even in astronomy,” “Arecibo means dreams, goals, inspiration…,” “it was where I saw that a degree in electrical engineering doesn’t have to lead to building weapons,” and “people do not imagine the influence that Arecibo has not only in science, but to aspiring scientists like me” are among the eulogies being posted for our beloved Arecibo.

#WhatAreciboMeansToMe: More than a telescope, Arecibo is the reason I am even in astronomy, and has had an incalculable impact in the communities of PR. A thread 🧵. pic.twitter.com/GOFGXAlQ3o

Images of the Arecibo Observatory will always be around, obviously, even after the radio telescope’s  collapse. One particularly unusual one is contained in the Arecibo Message on its way to globular star cluster M13 at the edge of the Milky Way galaxy. In addition to the simple pictorial image of Arecibo, the binary message also contains a stick figure of a human, the DNA double-helix, and our solar system. To think that the Arecibo Message, designed by Cornell University astronomer Frank Drake with the assistance of Carl Sagan and the Arecibo Observatory staff, was beamed directly from Puerto Rico’s humble countryside to any extraterrestrial intelligent life has always been a source of wonder.

#WhatAreciboMeansToMe More than a telescope, Arecibo means dreams, goals, inspiration… I refuse to think that this will be the end. It is very important for many researchers. For the Universe, for our atmosphere, and for the next generations, please #SaveArecibo 💫🙏🏼🌎🌌 pic.twitter.com/n5JUyf111v

Ever since the Arecibo Message was transmitted on November 16, 1974, I myself have wondered whether any technologically advanced civilization elsewhere in our universe could ever communicate back before we’re all gone. I volunteered my personal computer’s idle processing time so that the SETI program—Search for Extraterrestrial Intelligence—could attempt to decode possible transmissions from any other intelligent civilizations in our galaxy that were being monitored at the Arecibo Observatory.

Puerto Rico has been through a very difficult stretch over the last several years. A prolonged economic downturn, a catastrophic hurricane, political upheaval, a damaging earthquake swarm, a pandemic, and now the loss of our world-renowned source of scientific pride. It is my sincere hope that youngsters on and off the island will find inspiration elsewhere in so many other present and future scientific advancements and technological achievements.

Puerto Rico, the United States as a whole, and the world, would all benefit from more inspirational scientific endeavors such as the Arecibo Observatory, that can help guide us to a safer, sustainable, and more just place.

(Editor’s note: In the time since this OpEd was published, the National Science Foundation released a pair of videos that show the moment of the collapse of the 900-ton structure. One video is from a ground-level view, while the other is from the vantage point of an airborne drone that was monitoring the cables at the exact moment they gave way.)