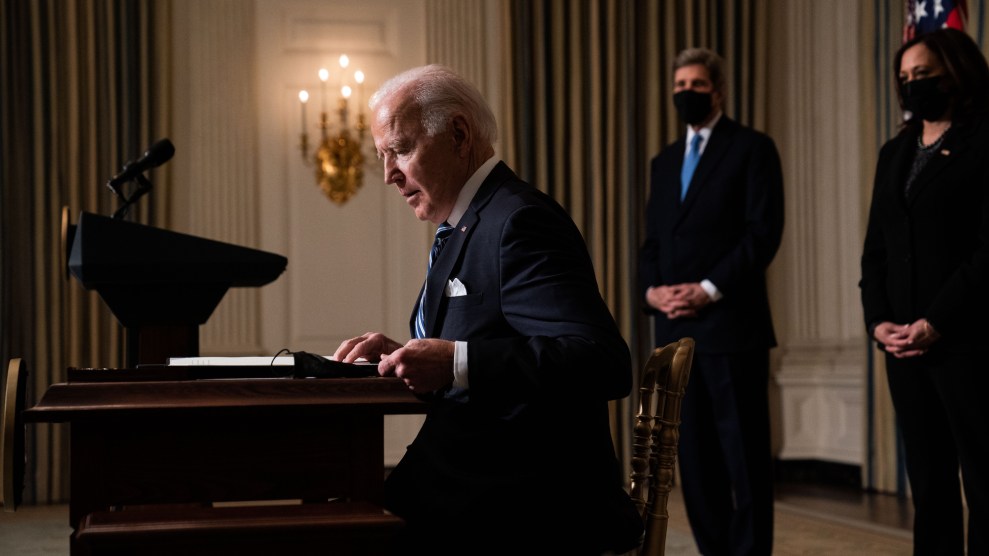 Many of President Joe Biden’s promises for tackling unchecked climate pollution come down to nailing down one obscure economic metric. It’s called the social cost of carbon, and it will guide policymaking across the Biden administration for how to consider the benefits and costs of reigning in climate pollution.

In a single number, it is supposed to capture the full extent of damage to the economy and society for every additional ton of greenhouse gas pollution we add to the atmosphere. Settling on that one number is a minefield of disagreement, because it hinges on estimating generations of damages from climate change as well as the wealth of future generations. While science supports a high social cost of carbon to hasten the transition away from fossil fuels, the politics are much messier and fraught. It’s been a hotly contested issue since the Obama administration, which settled on $51 per metric ton finalized in 2016. The Obama administration used estimates of the social cost of carbon to help justify EPA rules directly targeting climate change, like reducing carbon emissions from cars and trucks, and indirectly, such as regulating mercury from power plants. An even higher figure would help to justify more aggressive action.

The social cost of carbon is so important that one of Biden’s very first executive orders was to establish a new working group to assess how to price it.  On Friday, Biden took a concrete step and restored the Obama-era calculation of $51 for every metric ton of carbon released into the atmosphere. Trump had lowered the estimate to between $1 to $7, rendering it meaningless so Trump could slash climate regulations.

The reason the social cost of carbon is necessary is precisely because the federal government doesn’t have a uniform approach to climate change, like a carbon tax. It works like a guiding post for decisions on leasing lands, public projects, and environmental regulation, and will also become a key figure used in court battles over these policies.

The Biden administration has signaled that the interim figure is temporary, until the working group submits a final number by next January. Part of their process the next year will be to incorporate newer research and the input of the National Academies of Science, Engineering, and Medicine. Climate advocates will push for a higher figure, since most economists already agree the $51 per metric ton is the lower range of what is needed. The Obama figure, for instance, did not account for all climate impacts, such as worsening wildfire seasons and the loss of diverse ecosystems.

An estimate from economists Nicholas Stern and Joseph Stiglitz proposed an upper range of $100. They wrote in a 2021 working paper, “It is accordingly extraordinarily important that the [social cost of carbon] be calculated correctly.” The figure is important for more than just the government, because private companies also use an internal cost of carbon for risk calculations, and may use the government’s figure as a model. The higher the cost of carbon, the more incentive there is to consider alternatives to fossil fuels.

Environmental experts hope Biden’s interim social cost of carbon, restored Friday, is just an initial step toward a more aggressive policy next year. “The administration is taking a careful and legally sound approach in providing that a rigorous scientific process determine further updates,” Richard Revesz, director of the New York University School of Law’s Institute for Policy Integrity, said in a statement. “A great deal of research suggests that these interim values are a lower bound for the damages of greenhouse gas emissions.”

A more aggressive approach by the United States couldn’t come soon enough. US pollution temporarily decreased during the pandemic, but will rise again to business-as-usual if the country doesn’t shift course. As the world’s biggest historic polluter, the United States can impact the global appetite to act. Now that the Biden administration has rejoined the Paris agreement, it will have to follow its promises with action, by submitting a new national target for reducing greenhouse pollution by 2030. Seventy-five other countries have already submitted their initial national targets for the next major climate conference, but an initial analysis from the UN Framework Convention on Climate Change on Friday found them to be “nowhere close” to matching what’s needed for its fast-dwindling opportunity to limit warming.

“2021 is a make or break year to confront the global climate emergency,” UN Secretary-General António Guterres said in a press release for the report. “The science is clear, to limit global temperature rise to 1.5C, we must cut global emissions by 45% by 2030 from 2010 levels.  Today’s interim report from the UNFCCC is a red alert for our planet.”