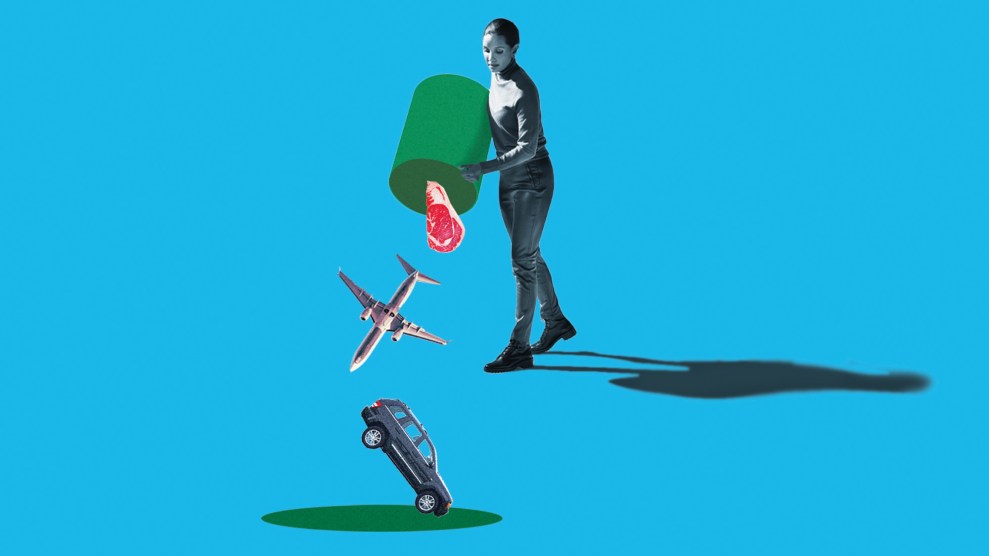 It was the summer of 2012 when sustainability scientist Kimberly Nicholas decided she couldn’t live like this anymore. She was attending a climate change conference in Austria, listening to talk after talk about how bad global warming was and how much worse it was going to get. All the while, Nicholas was thinking about all of the planet-heating carbon that she, like most other attendees, had dumped into the atmosphere by flying there.

“It really felt like a conference of doctors smoking cigarettes and telling our patients to quit,” Nicholas said.

But after a beer with a UK-based friend who took a train to the conference, Nicholas, who is American but lives and conducts research in Sweden, realized something: She could have done that too. Since then, Nicholas has stopped flying within Europe, cutting her air travel emissions by 90 percent in the process. She has also stopped eating meat and gone car-free. To ensure she’s making lifestyle changes that will have the biggest carbon bang for their buck, Nicholas conducted peer-reviewed research on the subject. In 2017, she and her colleague Seth Wyens published a paper on the individual behavioral changes that have the greatest benefits for the climate. Topping the list? Flying less, followed by driving less and eating a plant-based diet.

Nicholas has now expanded that paper into a book, Under the Sky We Make. A crash-course on why climate change is happening and how to fix it interwoven with beautifully written, witty anecdotes about a scientist’s personal journey toward sustainability, Under the Sky We Make pushes back—politely, but with science—against the narrative that individual actions make little difference to the climate. Rather, if you’re a wealthy person living in a wealthy country, the  book makes a compelling case that your individual choices matter a lot. For the “carbon elite,” as Nicholas describes her intended audience, the decision to take fewer flights or install solar panels on your roof materially reduces the amount of carbon in the sky forever, not least because it can inspire similar behavioral changes amongst your peers.

“We all have to take responsibility for what we can control,” Nicholas said. “And people like me, and like my friends from college who I initially started writing this book for, are one of the major sources of emissions.”

Individual responsibility has become something of a flashpoint in the climate discourse. On the one hand, oil companies love to harp on about personal carbon footprints as a way of distracting from their much larger contributions to the climate crisis, both through the fossil fuel products they make and their longstanding, ongoing efforts to delay climate action and misinform the public. At the same time, prominent journalists and scientists have waved off individual climate actions as a distraction from the systemic changes that are needed to solve the crisis—changes like overhauling our electricity and transit systems through governmental investments in clean energy, better regulation, and carbon pricing. They’re joined by a growing chorus of climate justice advocates who rightly point out that asking poor people to make difficult dietary shifts or give up the car they need to get to work is completely unfair.

The richest 10 percent of the global population is responsible for about half of all household emissions.

That’s not what Nicholas is doing. Her message isn’t aimed at folks struggling to make ends meet, but at people making a middle-class income or higher who live in a wealthy country like the United States, Germany, or France. Far from a distraction, Nicholas argues that the climate impact of the carbon elite is something we need to focus on—individually and systematically. She points out that globally, more than two-thirds of climate pollution can be attributed to household consumption, and that the richest 10 percent of the world population—those making more than $38,000 a year—is responsible for about half of those emissions.

The wealthier you are, the higher your individual share of the carbon pie tends to be due to “luxury emissions” associated with extra steak dinners, owning and driving more cars, and the carbon footprint elephant in the room, flying. Nicholas notes that the 1 percent of the world population who fly most often are responsible for half of all air travel emissions. (Flights are responsible for 2.4 percent of emissions globally, but they drive an estimated 7.2 percent of warming due to high-altitude atmospheric effects.) Wealthy high emitters, Nicholas argues, must support policies that get the world to net-zero emissions quickly, but they must also take steps to reduce their luxury emissions in order to make the energy transition easier for everyone.

“The quicker that high-income folks reduce our own personal emissions to a sustainable level, that makes a huge difference for how fast we can actually make this transition happen,” Nicholas said.

Cutting back on luxury carbon emissions “has become one of the true joys of my life.”

Cutting back on luxury carbon emissions doesn’t have to be a sacrifice. Nicholas says she’s had numerous adventures she wouldn’t have had otherwise “by traveling more slowly and more creatively and more adventurously” across Europe on the train. In 2017, when Georgia Institute of Technology climate scientist Kim Cobb decided to start biking 3 miles to work twice a week instead of driving, she says it “seemed like a cliff I would never be able to fall off and not die.” A month later, she was biking to work every day.

“It has become one of the true joys of my life,” Cobb told Grist. “And I’m kicking myself for never trying it before. It keeps me wondering: what other assumptions am I making about this transition in front of us that are so deeply false?”

Cobb said that while most of her friends and colleagues are “just kind of intrigued” by her new lifestyle choices, a few have been inspired to start biking more themselves, or to install solar panels on their roofs as Cobb did in 2019. In her book, Nicholas cites other examples of personal climate actions having a social ripple effect, including how teen climate activist Greta Thunberg and her mother, the opera singer Malena Ernman, have helped bring about a no-fly movement in Sweden through their individual decisions to stay on the ground.

Individual actions are no panacea. After reading Nicholas’ book, I used the University of California-Berkeley’s Cool Climate Calculator to take a peek at my own carbon footprint. I was alarmed to discover that, at around 25 metric tons of CO2 per year, it’s 10 times higher than the 2.5 metric tons per person per year researchers say we need to reach by 2030 to limit global warming to 1.5 degrees C (2.7 degrees F). But when I simulated doing everything I reasonably could do to reduce my footprint in the calculator, including getting rid of my car and going vegan, my footprint only shrank by 3 metric tons. I couldn’t very well stop eating entirely, and as much as I’d like to, I can’t afford to retrofit my natural gas-heated home to use an electric heat pump instead.

Nicholas explained that my personal challenges reflect the fact that when you bring your carbon footprint down close to the average level for your country—about 18 metric tons a year for Americans—“you have exhausted the low-hanging fruit for individual choices.” (Nicholas’ choice to stop flying around her continent might have been more difficult if she still lived in the United States, where coast-to-coast train infrastructure is far less developed.) Once you’ve taken all the individual actions you can, given your personal situation and your society’s infrastructure, Nicholas suggests directing your energy toward “system-level changes,” like getting your government to a price on carbon and divesting the economy from fossil fuels. The last few chapters of Under the Sky We Make are focused on how individuals can help to bring about those bigger changes, by moving their money out of banks that support mega-polluters, lobbying their representatives to support aggressive climate policies, joining protests, and more.

Under the Sky We Make is a breezy field guide on how to align your lifestyle with your values that avoids being overly prescriptive. That’s perhaps best illustrated by the book’s neutrality on one of the most controversial climate choices of all: whether or not to have kids. While Nicholas’ 2017 study found that having one more kid—and bringing an additional lifetime worth of emissions into the world in the process—was the single most significant individual climate choice a person could make, she sees it as more of a philosophical decision than a scientific one.

After all, Nicholas argues, the adults alive today will create the climate conditions that future generations will inherit. If we make the right decisions, children not yet born will have a world they can thrive in. Whether those are our kids, or members of the global community we’re fighting to secure a future for, the sky they live under will be the one that we make for them.