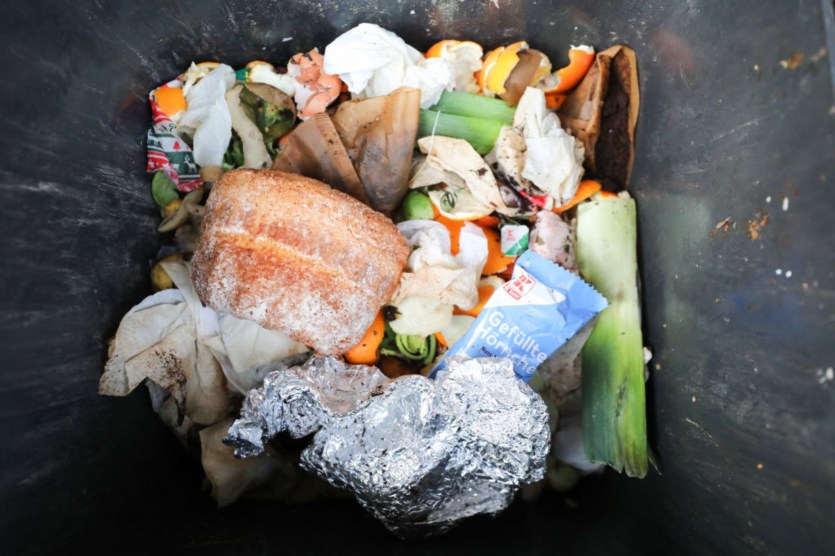 This story was originally published by The Guardian and is reproduced here as a part of the Climate Desk collaboration.

People waste more than two trillion pounds of food a year, a UN report has revealed. It is the most comprehensive assessment to date and found waste was about double the previous best estimate.

The food discarded in homes alone was 163 pounds per person each year on average around the world, the UN found. In the UK, which has some of the best data, the edible waste represents about eight meals per household each week.

The UN report also includes data on food waste in restaurants and shops, with 17 percent of all food dumped. Some food is lost on farms and in supply chains as well, meaning that overall a third of food is never eaten.

The waste damages efforts to help the billions of people who are either hungry or cannot afford a healthy diet, but also harms the environment. Food waste and loss causes about 10 percent of the emissions driving the climate emergency, and intensive farming is a key cause of the biodiversity crisis and global pollution.

If food waste were a country, it would have the third highest carbon emissions after the US and China.

If food waste were a country, it would have the third highest emissions after the US and China. But the researchers said cutting food waste was one of the easiest ways for people to reduce their environmental impact. “Yet this potential has been woefully underexploited,” said the report.

Food waste had been thought of as a problem mostly affecting rich countries. But the UN report found levels of waste were surprisingly similar in all nations, though data is scarce in the poorest countries.

The researchers said nobody bought food with the intention of throwing it away and that small amounts discarded each day might seem insignificant. Therefore, increasing people’s awareness of waste was key, they said, such as via separate food waste collections by local authorities.

Government and corporate action were needed, but individual action was important, the experts said, such as measuring portions of rice and pasta, checking the fridge before shopping and increasing cooking skills to use what was available. The greater time available for planning and cooking in homes during coronavirus lockdowns in the UK appears to have reduced waste by 20 percent.

“Reducing food waste would cut greenhouse gas emissions, slow the destruction of nature through land conversion and pollution, enhance the availability of food and thus reduce hunger and save money at a time of global recession,” said Inger Andersen, the head of the UN Environment Programme (Unep), which published the report. “Businesses, governments and citizens around the world have to do their part.”

“We are so used to wasting food that we’ve forgotten its value.”

Marcus Gover, the head of Wrap, an NGO that helped write the report, said, “We are so used to wasting food that we’ve forgotten its value, and the cost that feeding our growing global population has on the natural world. Like it or not, we in our homes are the most significant part of the problem.”

The report was produced to support global efforts to meet the UN’s sustainable development goal of halving food waste by 2030. It found 11 percent of all the food sold to consumers was wasted in homes in 2019, with restaurants discarding 5 percent and food shops dumping 2 percent.

Good data on household waste was available for countries representing 75 percent of the world’s population. Food waste includes edible and inedible parts, such as rinds and bones. The mix is about 50:50 in some high-income countries but unknown elsewhere.

“However, even if some of that waste can’t be consumed by humans, there are environmentally preferable ways in which it can be managed, [for example] by diverting it to animal feed or composting,” said Clementine O’Connor at Unep. “What we want to drive home is we need to get food waste out of landfills.”

“It’s not only the food that we’re chucking out, but also all the natural and financial resources” that produced it.

“The UK has really taken a leading role in food waste reduction and is one of very few countries that has achieved a great reduction,” she added. Between 2007 and 2018, edible household food waste was cut by almost a third, according to Wrap, though overall food waste was still 19 percent in November 2020.

Carina Millstone, of the food campaign group Feedback, said the UN report was seminal and showed food waste action must be a high priority for governments ahead of the Cop26 climate summit in November: “As hosts, the UK must lead the way—it can do so by measuring and tackling food waste on farms, and by introducing mandatory food waste measurements and reduction targets for businesses.”

Wrap started a food waste action week in the UK on Monday to raise awareness of the issue and drive change. Nadiya Hussain, the chef and TV presenter, is a supporter. She said, “From avoiding buying or preparing too much to storing food correctly, the week is about helping people make the most of their food and helping protect our planet.”

Martina Otto, of Unep, said, “If you don’t take action on food waste, it’s a triple lose. It’s not only the food that we’re chucking out, but also all the natural and financial resources that went into producing that food. So let’s make it a triple win.”