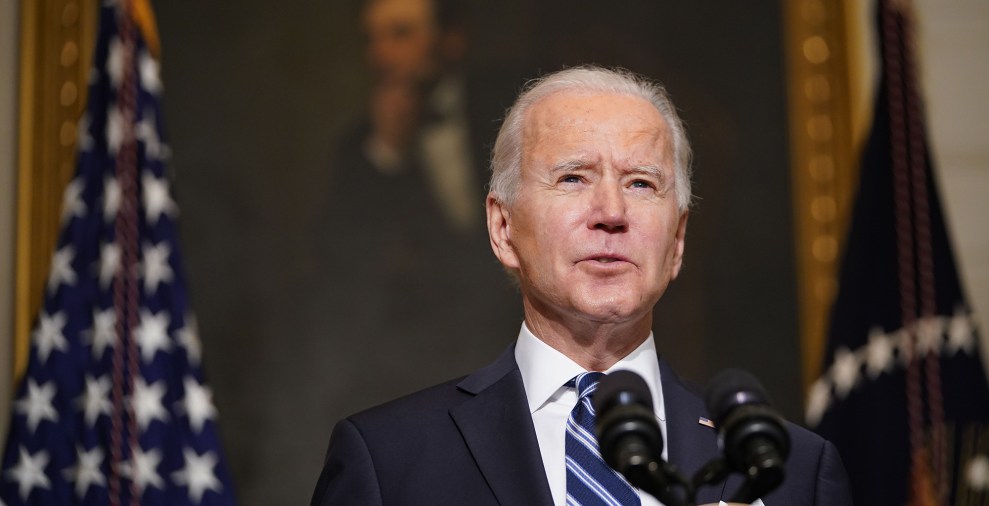 On March 31, President Joe Biden unveiled his long-awaited American Jobs Plan, a sweeping wishlist for fixing the country’s crumbling infrastructure, revitalizing manufacturing and research, and tackling the climate crisis. The United States would make the biggest jobs investment in itself (self-care—so hot right now) since the postwar era—$2 trillion—creating millions of positions to rebuild the post-pandemic economy.

Hidden deep in the American Jobs Plan is a single sentence that calls for mobilizing an army of a uniquely American kind of laborer: “This $10 billion investment will put a new, diverse generation of Americans to work conserving our public lands and waters, bolstering community resilience, and advancing environmental justice through a new Civilian Climate Corps, all while placing good-paying union jobs within reach for more Americans.”

The Civilian Climate Corps is the Civilian Conservation Corps by another name. In 1933, the US government created the CCC, an unprecedented Depression-era program that put 3 million Americans to work building national parks, fixing roads and dams, and fighting fires. It in no small part helped create the American landscape we enjoy today. “A lot of the activities of the original Civilian Conservation Corps were focused on both getting people to work, obviously, but also improving the accessibility and the infrastructure surrounding our natural resources,” says Zeke Hausfather, a climate scientist and the director of climate and energy at the Breakthrough Institute, which advocates for action against climate change. “I still see there’s certainly a need for a fair amount of that. But I feel like, today, there’s also a need for more direct community-level activities in this broader category of climate resilience and adaptation.”

We need people to restore wetlands, to do controlled burns, and to plant trees.

That’s because the emergency that the OG Civilian Conservation Corps was meant to address was mostly unemployment. The resulting improvements to infrastructure and natural resources were swell, but secondary. The rebooted version is meant to tackle an altogether more complex, dangerous, and expensive beast: the climate crisis, which is already here and already deadly. We need people to restore wetlands to act as buffers against storm surges. We need people to do controlled burns in the West to keep ever-bigger wildfires at bay. We need people to plant trees to cool cities, because climate change is turning urban areas into ovens thanks to the heat island effect, in which concrete absorbs the sun’s energy during the day and releases it slowly at night.

On a macro level, these are all manifestations of climate change: Temperatures are growing more extreme, droughts more severe, and storms more ferocious. But on a micro level, these are all problems communities need help to fight. It costs money to clear brush around a town to keep wildfires away, or to open dedicated cooling centers in urban areas so people can escape heatwaves. So while the original CCC was about restoring nature and infrastructure more broadly, the Civilian Climate Corps could—and should—also work to prepare urban areas for the climate crisis.

There’s a problem, though, right out of the gate. “The scale that Biden’s proposing is going to be nowhere near in line with what’s actually needed,” says environmental economist Mark Paul of the New College of Florida. “The president has called for $10 billion, which would be enough to maybe put to work somewhere in the range of 150,000 to 200,000 workers total.” For comparison, the Civilian Conservation Corps employed over 500,000 workers at its peak, and 3 million over the program’s lifetime. “If we simply scale that for today’s population,” Paul adds, “the 21st century CCC should be employing roughly 1.5 million workers at its largest size, and perhaps upwards of 9 million workers over the duration of the program.”

Given the scale and severity of the climate crisis, the Civilian Climate Corps should employ far more people than its predecessor did during the Great Depression. “The national park system alone has a backlog of maintenance larger than the entire program that Biden has proposed here,” Paul says. “So there’s no shortage of work to be done. But we do need to see more leadership from the White House on this issue to show that they are committed to the climate crisis.”

“Starting your career during a recession leads to significant long-term scarring of workers.”

Also, just as it did in the 1930s, the US has millions of people to get back to work right now, particularly young employees. For workers between the ages of 16 and 24, the official unemployment figure is 11 percent. But Paul thinks that’s an underestimate. “If you account for how many workers have been pushed out of the labor force due to the current labor market crisis, we’re talking about youth unemployment well north of 20 percent,” says Paul. “So this is a massive problem that we have on our hands. And economic research shows that starting your career during a recession leads to significant long-term scarring of workers. In other words, fundamentally lower wages, permanently higher rates of poverty.”

This is the exact demographic that could best be recruited to the Civilian Climate Corps—young people with the energy, mobility, and passion to fight the climate crisis on the front lines. “If we give them an opportunity to broaden their horizons, and at the same time restore America in some of its hidden corners and neglected places, what a great gift to the future,” Ohio representative Marcy Kaptur told WIRED last year. She introduced the 21st Century Civilian Conservation Corps Act in 2019, but it’s yet to pass the House. “I don’t know a single person—including my own father, who worked for the Civilian Conservation Corps as a very young man—who wasn’t changed and elevated by that experience.”

Biden’s infrastructure plan is still a wishlist; Congress now has to turn it into proper legislation. The wrangling could take months, and there’s no guarantee that the revitalized Civilian Conservation Corps makes it through negotiations. But the CCC is, oddly enough, one of the few issues left in America that hasn’t turned hyper-partisan. A recent poll—conducted by Data for Progress and the Justice Collaborative Institute—of 1,200 likely voters showed 80 percent of Democrats and 74 percent of Republicans want the program to return.

“The American Jobs Plan will lead to a transformational progress in our effort to tackle climate change with American jobs and American ingenuity,” Biden said Wednesday in a speech introducing his proposal. “It’ll protect our community from billions of dollars of damage from historic super storms, floods, wildfires, droughts, year after year, by making our infrastructure more secure and resilient and seizing incredible opportunities for American workers and American farmers in a clean energy future.”

It’s going to take a lot more than $10 billion to create a truly effective CCC, and maybe by the time the final draft gets to Biden’s desk, advocates in Congress will have bolstered that figure. Supporters point out that no one loses when you put people to work sprucing up the nation: Young people get a paycheck that they spend on goods, boosting the economy wherever they go. “Right now we are facing an existential threat in climate change,” says Paul. “Unfortunately, it is an all-hands-on-deck moment. And what we’re seeing from all the polling data is that people want the government to spend big.”