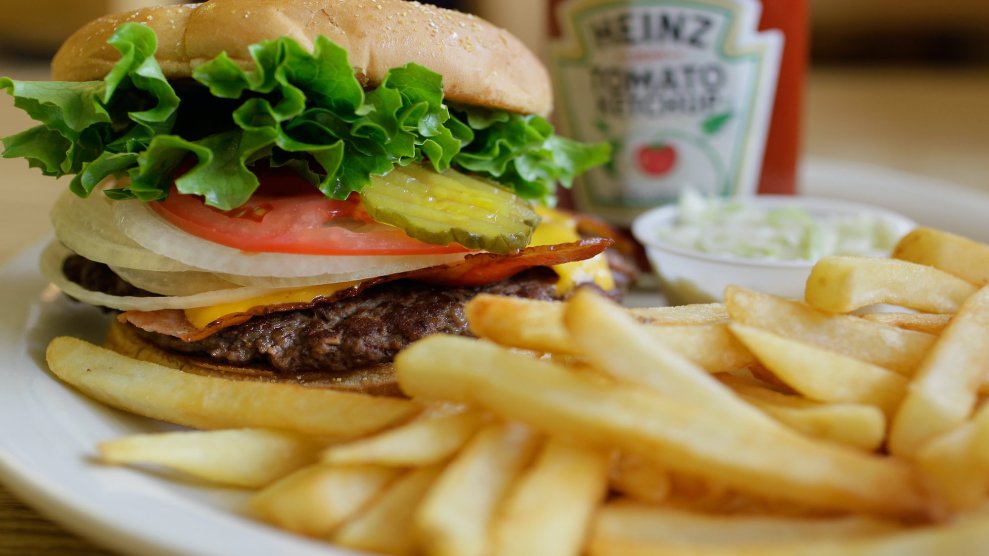 At a major summit hosted by Joe Biden last week, a procession of world leaders fretted over the spiraling dangers of the climate crisis, with some pledging further cuts to planet-heating emissions, others touting their embrace of electric cars and a few vowing the end of coal.

In the US, however, Biden’s political opponents were focused on one pressing matter: meat.

“Bye, bye burgers” was an on-screen graphic on Fox News, which ran the false claim that Biden would, tyrannically, allow Americans just one burger a month. Larry Kudlow, a former economic adviser to Donald Trump and now Fox Business host, baselessly envisioned Fourth of July celebrations where people would only be allowed to “throw back a plant-based beer with your grilled Brussels sprouts” on the barbecue.

Prominent Republicans seized upon the supposed Biden climate diktat—which does not exist. The Texas governor, Greg Abbott, retweeted a claim of a four-pound-a-year meat allocation with the comment: “Not gonna happen in Texas!” The far-right conspiracy theorist Marjorie Taylor Greene, a Republican representative, called Biden the “Hamburglar” while Garret Graves, ostensibly a more moderate House Republican, said the president’s plan amounted to “dictatorship.”

The unfounded claims, which appear to have somehow sprouted from a University of Michigan study on the impact of meat eating, do not reflect Biden’s actual proposals to tackle global heating, which make no mention of personal meat consumption. But they have dealt a hefty blow to Republicans’ latest efforts to present themselves as committed to taking on the climate crisis.

Aware of growing voter alarm over the climate crisis—a majority of Republican voters now support the regulation of carbon dioxide—McCarthy has brushed aside the objections of some colleagues to recast the party’s beleaguered environmental reputation by promoting tax breaks for renewable energy, making it easier to import minerals for clean technology, and supporting a push to plant a trillion trees around the world.

Critics, however, say the proposals are wildly inadequate to avoid disastrous global heating, which scientists say must involve sharply cutting emissions this decade before reaching net zero by the middle of the century. In lieu of any mention of phasing out fossil fuels—the primary cause of the climate crisis—the Republican plan instead calls for the construction of the Keystone XL pipeline, an oil project halted by Biden.

“Getting to net zero requires extraordinary and sustained effort across all of society, not just the federal government, so you can’t just take a piecemeal approach like this, clap your hands and say, ‘We’re done here’,” said Nate Hultman, an expert in public policy at University of Maryland who helped draw up emissions reduction targets for Barack Obama’s administration. “This is a sort of mishmash of proposals, not a comprehensive strategy. I just don’t see how you get to a 50% cut by 2030 or to net zero with this.”

Neither McCarthy’s office nor Citizens for Responsible Energy Solutions, a conservative group that created a website for the plan, responded to questions on what emissions reductions the assorted proposals would achieve. Last week, Heather Reams, executive director of CRES, accused Biden of “radically impacting our already battered economy” by promising to cut US emissions in half by the end of the decade.

During Trump’s presidency, Republicans laid siege to various climate regulations, largely backed his decision to remove the US from the Paris climate accords, and acquiesced as the president repeatedly mocked climate science. Despite moves by some younger, more moderate conservatives to prod the party to respond to the increasingly severe wildfires, storms and heatwaves strafing the US, the party’s rhetoric has barely shifted following Trump’s election loss, according to Robert Brulle, a visiting professor of the environment and society at Brown University.

“These guys need to get a new PR agency, it’s like they are talking about climate change in the 1990s,” said Brulle. “It’s just recycled arguments from the past or, on the meat thing, just outright lies. These arguments may have worked in the past to delay climate action but it’s so exhausted now. It’s different day, same old shit.”

Michael Mann, a climate scientist at Penn State, said it was pleasing to see most Republicans shift away from outright denial of climate science but that a “new climate war” was opening up involving “reassuring sounding but empty rhetoric” to stymie regulations to reduce emissions.

“They have the same intent as outright denial—to keep us addicted to fossil fuels as long as possible so that fossil fuel interests, who now have such great influence over the Republican party, can continue to make trillions of dollar profits, at our collective expense,” Mann said.

During the virtual gathering, even leaders considered climate villains by environmentalists called for greater action on global heating, with Vladimir Putin, president of Russia, warning the “fate of our entire planet, the development prospects of each country, the well-being and quality of life of people largely depend on the success of these efforts” to reduce emissions.

“The GOP is an extraordinary outlier in the political spectrum around the world, they have backed themselves into a political and rhetorical cul de sac,” said Brulle.

“They are stuck in a really bad position that no other major political party in the world is in. Climate obstructionism is now a core part of Republican creed, much like opposition to abortion and gun control. As long as they remain competitive in elections I don’t see that changing.”