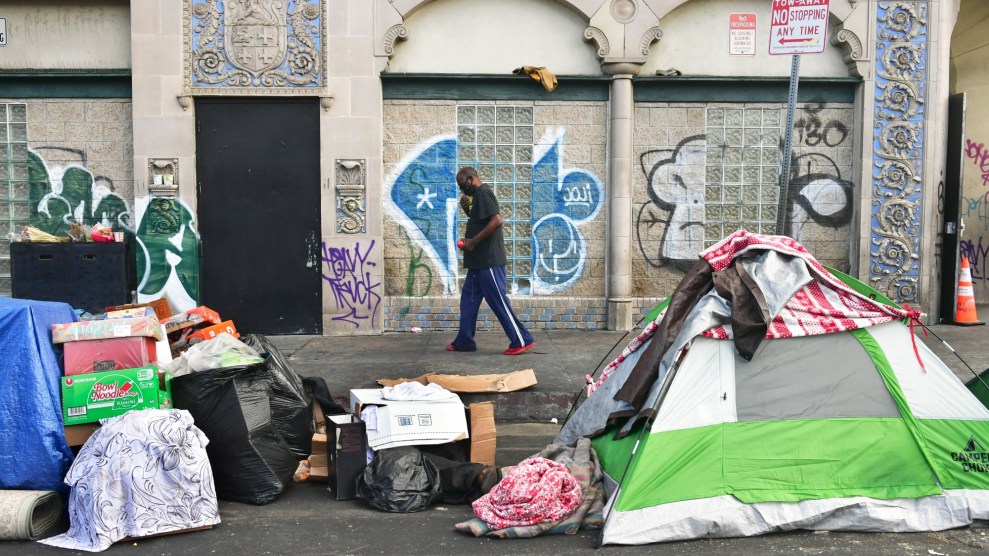 A man walks past tents housing the homeless in Los Angeles.Frederic J. Brown/AFP/Getty

Two weeks after the United States began its first coronavirus lockdown in March 2020, then-President Donald Trump instructed the Federal Emergency Management Agency, or FEMA, to reimburse cities, counties, and tribes for 75 percent of costs related to housing homeless people in unoccupied hotels, as well as administering COVID-19 tests to those without housing. When Joe Biden assumed the presidency in January, he increased coverage to include fees related to vaccinating homeless populations and also guaranteed that reimbursements would now retroactively cover 100 percent of related expenses.

In theory, the program would both curb the spread of the novel coronavirus and also protect the more than 580,000 people experiencing homelessness at any given time from the variety of threats that come without steady access to housing. For the 225,000 homeless people living without formal shelter of any kind on a given night, encounters with extreme weather events, pollution, and policing can be uniquely deadly.

But as Winter Storm Uri descended upon the South in mid-February, leaving millions of people without water and electricity across at least seven states, more than half of Texas’ 500,000 hotel rooms were unoccupied and not a single municipality in the state had requested funds to house people living on the streets. As temperatures in the Lone Star State dropped to 20 degrees F, dozens of unhoused people were left frostbitten and hospitalized and at least six were found dead.

Of the 10 major metropolitan areas with the most homelessness, only 3 have requested funds.

Texas wasn’t the only place where localities neglected the program. According to reimbursement request records released to Grist after a Freedom of Information Act request, one year into the program only 23 local governments, including one federal tribe, had submitted funding requests. Roughly 80 percent of the requests, which altogether total just over $600 million, came from just four major urban counties: Los Angeles County, California; Denver County, Colorado; Cook County, Illinois; and King County, Washington. (The data is current as of April 7; a comprehensive list of the requesters is available here.)

Of the top 10 major metropolitan areas with the highest levels of homelessness per capita, according to data from the Department of Housing and Urban Development, only three submitted reimbursement requests.

Officials from New York City, where nearly 15 percent of all unhoused people in the U.S. shuffle through the city’s vast shelter system, did not respond to Grist’s requests for comment about why the city did not participate in the program to relieve the threats posed by congregate living during the pandemic. But leaked reports show that dysfunction within city leadership led to the city passing on funds while COVID-19 spread through at least 94 percent of the city’s shelters, and 60 people living in the facilities died.

In San Francisco, where there are more than 8,000 people experiencing homelessness on a given night, county leaders hinted at the possibility of taking advantage of the funding following Biden’s increased coverage, but no requests had been submitted as of April 7. San Francisco officials did not respond to Grist’s requests for comment.

The program and its funding were made available through the 1988 Stafford Act, a federal law designed to help facilitate a uniform federal approach to state and local disaster relief. Unlike other coronavirus funding, the program is not earmarked for a certain dollar amount, so FEMA resources can be scaled to meet all eligible needs. But like other coronavirus relief programs, this particular deployment of the Stafford Act is a temporary fix, set to end on September 30.

Interviews with policy experts and municipal leaders suggest that poor governing relationships between federal and local governments, a difficult reimbursement process, and decentralized planning left the program to be largely ignored—and the country’s unsheltered population unprotected from the spread of COVID-19 and a slew of recent severe weather events.

John Beard, a former city council member in Port Arthur, Texas, learned the inner workings of FEMA’s reimbursement process while helping to lead his city out of the destruction caused by Hurricane Harvey in 2017. He said the processes to obtain federal funding favor large cities and undermines the reason the money was made available in the first place: to help people no matter where they live. Larger cities that have regular communication with the federal government are more likely to know of the many different funding options available, he told Grist.

“It’s a failure at the federal level to not get [the money] out to the cities, because they know which cities need it the most,” Beard said. “And it’s a failure by cities for not amplifying their needs and making the requests.”

“A lot of cities simply don’t have the wherewithal or resources” to grasp such an opportunity.

“A lot of cities simply don’t have the wherewithal or resources,” he added. “Bigger cities can afford consultants who spend every day searching for funding opportunities, but smaller cities don’t have anybody watching the clock, so everyday paperwork expires and funds dry up.”

Steve Sanders, a former director of the sustainable communities program at the nonprofit Institute for Local Government, said that, with too many issues and not enough resources, many localities prioritize areas where there is a widely understood economic benefit or a powerful constituency to satisfy—neither of which is obviously the case when it comes to providing housing to those without.

“The reality is development decisions are based on return on investment—and these aren’t flashy investments,” Sanders said. “When there is scarce political power for the key actors who care about the underlying issues of environmental justice and housing justice, don’t bet on seeing positive outcomes.”

Three jurisdictions with some of the country’s highest rates of homelessness—Honolulu, Hawaii, and California’s San Diego and Santa Cruz Counties—told Grist that they were either unaware of the FEMA program’s existence or declining to use it. All three jurisdictions had locally funded homeless projects in place during the pandemic. In Santa Cruz County, people qualifying for California’s public assistance program were offered subsidized hotel rates if they were experiencing homelessness.

In Honolulu and San Diego County, leaders used the federal Coronavirus Aid, Relief, and Economic Security Act, or CARES Act—which appropriated $12 billion to be used for homelessness and rent support—to extend their shelter services and make COVID-19 testing and vaccination more accessible to unhoused residents. However, the $12 billion was spread over a wide range of activities, including everything from mortgage assistance and home rehabilitation to the maintenance of traditional shelters, meaning it’s unclear how much actually went toward providing safe, private housing for those without shelter. After Grist’s correspondence with San Diego County, reports surfaced that the county plans to utilize the FEMA program to “free up” CARES money to be used for other social services.

Even in cities that took advantage of FEMA funding during the program’s first year, success was fleeting. In Los Angeles at the program’s peak, only around 4,300 individuals—less than 7 percent of people experiencing homelessness in the county—were housed before county leaders withdrew their support for the program altogether. In Washington state’s King County, where Seattle is located, critics have argued that the government continues to leave federal funds on the table, and suburban opposition has slowed program implementation.

For other cities, a complex reimbursement process has made it extremely difficult to receive funds, according to Rajan Bal, a campaign manager at the National Homelessness Law Center.

“It’s a complicated application process that hasn’t necessarily been conveyed…as it should be.”

“It’s a complicated application process that hasn’t necessarily been conveyed as best and easy as it should be, especially under Trump,” Bal told Grist. Bal said that initially there was confusion around which populations of people qualified for housing; it was unclear if those temporarily displaced by disasters or people experiencing temporary, transitional homelessness qualified for support. (Current guidelines say they do.) FEMA and White House officials did not respond to Grist’s requests for comment.

While Bal believes the FEMA program has had some effectiveness as a temporary solution, he said that municipalities should be “using the opportunity to inject local communities with cash to provide more housing solutions for people right now, as a springboard to combat the long term homelessness crisis and protect this vulnerable population from freezing or melting on the streets.”

This way, he said, jurisdictions can follow San Diego County’s lead and free up other funding streams, such as CARES funding, to pay for other social services and move toward funding more permanent housing solutions such as supportive housing, which allows people experiencing chronic homelessness the opportunity to have their own space while still receiving social support services.

Instead, Bal continued, many municipalities are pursuing policies such as encampment sweeps that are exposing unhoused people to coronavirus and potentially even landing them in jail.

“There are elected officials actively pursuing the criminalization of homelessness and are actively choosing not to use available funding sources like FEMA reimbursement for shelters,” he said. “They’re spending taxpayer dollars to criminalize people instead of relying on these options that address homelessness.”

Unhoused people are disproportionately threatened by air pollution, toxic waste, and severe weather, so solutions have to be direct and targeted, said Beard, the former city council member whose Southeast Texas region has experienced an uptick in homelessness since Hurricane Harvey.

“At the end of the day, there is money to help people and it’s going unclaimed,” the former politician said. “Elected officials are chosen to look out for people, but there is help readily available and they let it slip past.