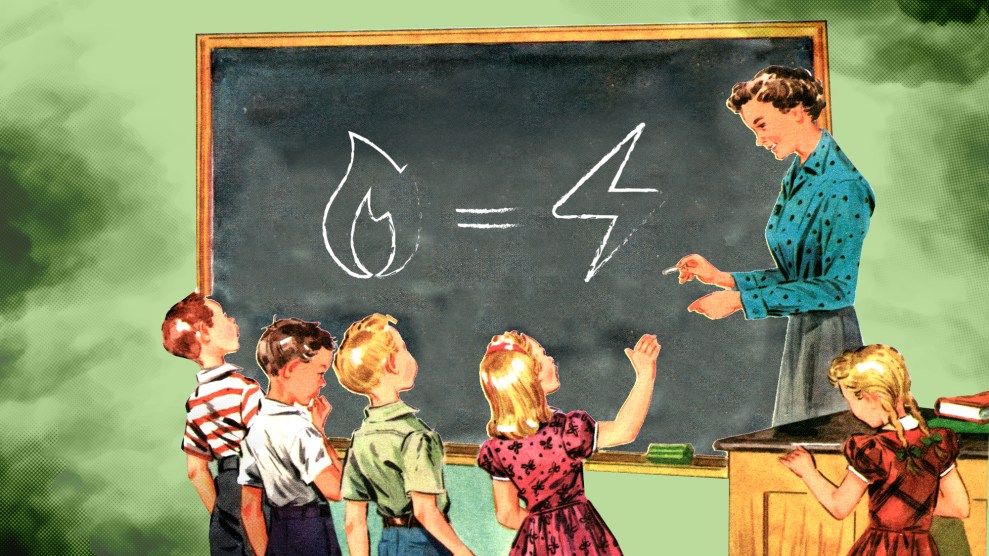 Gleb Bahmutov found something strange in his nine-year-old son’s backpack earlier this month. The longer he ruminated on what he discovered, the angrier he got.

The afternoon started off like most, with the 41-year-old software engineer picking his son up from John M. Tobin Montessori School in Cambridge, Massachusetts. But when his son opened his backpack, Bahmutov caught a glimpse of two children’s activity books emblazoned with the logo of Eversource, an energy utility that serves more than 4.3 million customers across New England. The booklets, one of which was titled “Natural Gas: Your Invisible Friend,” include natural gas safety tips and portray the fuel as an ideal, clean way to cook food, power vehicles, and heat and cool buildings. Bhamutov immediately noticed one gaping hole in the information provided in the booklets: They didn’t once mention that burning natural gas emits greenhouse gases and contributes to climate change.

“To come home and find books aimed at children touting how great gas is and how clean it is, that it’s the cleanest fuel possible, that’s just wrong,” Bahmutov told Grist. “It’s unacceptable.”

The activity books caused concern among parents in the climate-conscious city of Cambridge and prompted apologies from both Eversource and the school district. While the utility claimed it was attempting to promote natural gas safety—a particularly salient issue in Massachusetts, which experienced a series of pipeline explosions north of Boston in 2018—the incident is the latest example of fossil fuel interests attempting to influence science education in public classrooms.

Bahmutov tweeted pictures of the booklets after he discovered them in his son’s backpack, prompting a flurry of responses from other Massachusetts residents. A teacher at a middle school 45 minutes south of Tobin, for example, tweeted that he was “mortified” when he saw his daughter flipping through the booklets that same week. Bahmutov’s post also elicited similar concerns from city council members, local researchers, and climate advocacy groups.

I saw this yesterday when my daughter was flipping through it, and I was mortified. The book actually said that natural gas is "clean" and reduces pollution. It's like saying that Bud Lite reduces alcoholism because it isn't hard liquor.

Radka Stepanska, whose son is in the same class as Bahmutov’s, said she felt that Eversource took advantage of the fact that the school is still transitioning back to fully in-person learning and may be less organized than usual. She assumed the booklets were advertisements from Eversource, not realizing they were aimed at children until Bahmutov pointed it out to her. “Obviously, my son is not paying attention when it is in his backpack,” she said. “Usually parents are the ones who will find out those brochures or other materials.”

Cambridge Public Schools’ Chief Strategy Officer Lyndsay Pinkus told Grist that the booklets were mistakenly distributed to students. Any materials provided by outside organizations are typically reviewed by the deputy superintendent’s office, Pinkus explained, but a new staff member did not follow this procedure with the Eversource materials. “It really was an innocent mistake by a new staff member,” she said. In an email to parents, Tobin Principal Jaime Frost stressed that the booklets are not part of the curriculum and the school does not support the messaging. She wrote that the same booklets were sent to all Cambridge Public Schools two years ago, but were caught before being distributed.

Eversource’s media relations manager, William Hinkle, wrote in an email that the booklets were created to raise awareness about natural gas safety at home, but acknowledged that the material could be improved. “Moving forward, we will work to include climate change information in future educational materials, as well as continue to provide important natural gas safety tips,” Hinkle told Grist. He said that there are various versions of the book for different grade levels that date back to 2011, and the material undergoes periodic updates.

While Hinkle said the books are provided to schools in Massachusetts or Connecticut upon request, Pinkus from Cambridge Public Schools was adamant that nobody in the district requested them. “There’s no way anybody currently or in any recent history would have requested anything even remotely close to this,” she said. Eversource did not respond for comment on this point.

Heartland Institute sent 350,000 booklets titled, “Why Scientists Disagree About Global Warming” to students across the country.

Fossil fuel companies and climate denial groups have long sought to shape how the next generation perceives climate change, turning the classroom into a battleground for what the country’s future ideology will be. In 2012, leaked documents revealed that the oil and gas-funded Heartland Institute, a conservative and libertarian public policy think tank that promotes climate denialism, planned to spend $200,000 over two years to sow doubts about the scientific consensus on climate change in K-12 classrooms. Years later, the think tank mailed 350,000 booklets titled, “Why Scientists Disagree About Global Warming” to students across the country.

The Heartland campaign is an overt example of fossil fuel interests attempting to influence children’s understanding of climate change, but groups also employ more subtle methods to paint a favorable picture of the fossil fuel industry. They dream up cutesy cartoon characters, like the overall-clad Petro Pete, who was created in 2008 by the Oklahoma Energy Resources Board, which is funded by oil and gas producers and royalty owners. Children’s books starring the character paint a future without petroleum as a nightmare—Petro Pete’s clothes no longer exist, he can’t get to school because there is no bus, and he’s left disappointed when strawberry ice cream comes out of the machine as milk. Other fossil fuel-funded groups have created crude oil-themed word searches and promoted science experiments using Jell-O to model fracking technology.

The activity booklets handed out at Tobin are misleading not because of what is written in them, but due to what isn’t included, said Glenn Branch, deputy director at the National Center for Science Education. “The pamphlet is very enthusiastic about natural gas,” he said. “It’s clean and non-polluting. It doesn’t acknowledge that it’s non-renewable at all.”

“Teachers don’t get the resources they need…Small wonder they reach out to offers of free things and perhaps use them uncritically.”

He doesn’t think a single booklet like the ones distributed at Tobin is incredibly damaging to students but said the incident highlights the larger issue of teachers having to rely on free materials from corporate interests in the first place. These fossil fuel-friendly resources can reinforce existing educational inequities, he said—Cambridge is a wealthy city, but underfunded teachers in less wealthy districts may have lackluster climate education and often need to lean more heavily on free materials.

“Teachers don’t get the resources they need,” Branch said. “Small wonder they reach out to offers of free things and perhaps use them uncritically.” He encouraged educators in search of materials to turn to the federally funded Climate Literacy & Energy Awareness Network, or CLEAN, whose site is home to more than 700 reliable, scientist-vetted resources.

Branch is wary of Eversource’s promises to include climate change in future materials because the utility isn’t technically the publisher of the booklets. They are designed and printed by Culver Company, which creates promotional and educational materials for utilities. Eversource simply had its logo printed on the cover. “Whether Culver will feel the pressure and update and revise the materials appropriately remains to be seen,” Branch said.

In a statement to Grist, Culver agreed that some of its materials “could be updated to better emphasize the importance of clean energy solutions while still contributing to the safety of our communities.” The publisher promised that moving forward, it would deliberately solicit input from a broader group of stakeholders, including parents and guardians, to ensure that its content “better reflects communities’ growing focus on a cleaner energy future.”

The weekend after he discovered the Eversource booklets, Bahmutov sat his son down for a frank conversation about the negative impacts natural gas has on the planet, in an attempt to combat any misperceptions caused by the material. “[My son] said, ‘Well, I guess I should cross out ‘Natural Gas: Your Invisible Friend’ and just say ‘Your Invisible Enemy,” Bahmutov said. “I was like ‘Well, that’s one way to look at it.’”