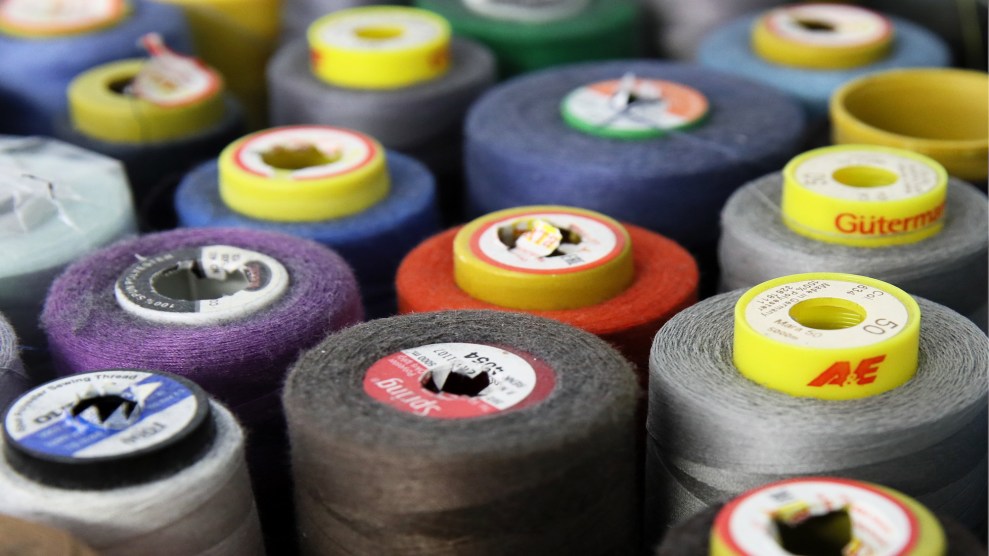 You probably know by now that when you wash a load of synthetic clothes, like yoga pants or moisture-wicking sweatshirts, tiny bits of them tear loose and flush out to a wastewater treatment facility, which then pumps them out to sea. A single load of laundry releases perhaps millions of these microfibers (technically a subspecies of microplastics, defined as bits smaller than 5 millimeters). So it’s no wonder that scientists are finding the particles everywhere they look, from the deepest seas to what’s no longer a pristine Arctic.

And now it turns out that your clothes are polluting the planet with microplastic before they’re even clothes. A new report from the Nature Conservancy picks apart the textile supply chain—from the manufacturer who makes synthetic yarn from little pellets of plastic, to the factory that stitches together the clothes—to estimate that this pre-consumer process releases 265 million pounds of microfibers each year. That’s the equivalent of one full T-shirt escaping into the environment for every 500 that come off the production line.

These microfiber emissions could grow by over 50 percent in the next decade, as the business of synthetic textiles continues to boom. “Almost all of us, every single day, wake up, reach into a drawer or into our closet, and put on something that at least in part is made from synthetic textiles,” says Tom Dempsey, director of the Oceans Program at the Nature Conservancy of California and a coauthor of the new report. “We have a real problem, not just in capturing these microfibers pre-consumer, as well as in our homes and wastewater facilities, but also in how to dispose of the microfibers we do capture.”

Thanks to our love of clothing, North Americans could be loading their fields with up to 330,000 tons of microplastics each year.

Treatment facilities actually catch between 83 and 99.9 percent of microfibers flowing out of our washing machines and the factories that make synthetic clothing. But humanity is producing such astounding quantities of the stuff that even catching 99.9 percent isn’t good enough. Oodles of them are able to escape filtering and end up in the environment. In the case of clothing factories, “wet processes” like the dyeing of fabrics and the pre-washing of finished clothes in enormous machines create microfiber-rich wastewater, which is then sent to a treatment facility. Some of the microfibers get stuck in the solid human waste that these facilities turn into “sludge,” which is then slathered on agricultural fields as fertilizer. One 2016 paper calculated that by doing so, North Americans could be loading their fields with up to 330,000 tons of microplastics each year. “I think of that as just a big catch-and-release program for microfibers,” Dempsey says.

And sludgy microplastics aren’t staying on those fields. When soils dry out, winds scour the dirt and blow microfibers around the world. So much microplastic is swirling around the atmosphere that each year the equivalent of 120 million plastic bottles is falling just on 11 national parks and other protected areas in the western US. (Plastic rain is the new acid rain.) Additionally, the treated water from our washing machines and textile mills, complete with microfibers that eluded filtering, gets pumped out to sea, where currents transport the particles around the globe.

Recently, scientists have been doing controlled experiments to show how variables like detergent and temperature influence how many microfibers a household washing machine shakes loose. But the textile pre-consumer process hasn’t been studied until now. “The production phase is still this real black box,” says microplastics scientist Lisa Erdle, manager of research and innovation at the 5 Gyres Institute, which advocates for action on ocean plastic pollution. “We know that there are higher microfiber emissions for new garments compared to old. So it definitely is not a surprise that the pre-consumer textile manufacturing phase could be a major source of emissions.”

Why worry? Well, because microfibers (and microplastics in general) have thoroughly infiltrated Earth’s ecosystems.

But why worry about invisible little bits of plastic escaping into the environment? Because microfibers (and microplastics in general) have thoroughly infiltrated Earth’s ecosystems. Just as a sea turtle might choke on a big piece of plastic like a shopping bag, so too might small animals, like the planktonic creatures that make up the base of the oceanic food web, have their digestive systems clogged with tiny plastics. And when microfibers soak in water, they leach their component chemicals. While it’s still too early to know the extent of the impact these chemicals have on marine species, scientists worry that they could be harmful for any number of them.

In fairness to synthetic microfibers, natural fibers aren’t faultless here either. “There’s a whole range of chemicals that are applied even to natural materials to give them different properties,” says Erdle. Clothing made from them is treated with dyes, of course, but also other substances to impart durability or waterproofing.

Scientists like Erdle are scrambling to better understand the effects of microplastics, especially when it comes to potential threats to human health. Researchers consistently find the particles in shellfish and other seafood that people consume. They’re in our water and in the air you’re breathing right now. One study earlier this year calculated that adults and children consume an average of 883 and 553 particles a day, respectively.

But the good news is that when it comes to pre-consumer microfiber pollution, there are actually business incentives for the clothing industry to clean up its act. Many factories actually treat their own wastewater in order to recycle it. If they can also sequester those microfibers and dispose of them properly (i.e., not spread them on fields), they can be socially and fiscally responsible. “What companies are finding is that by doing this, they actually save on water costs and utility bills that are associated with sewage,” says Sam Israelit, chief sustainability officer at the management consultancy Bain & Company and a coauthor of the new report. “And that reduction pays for the investments.”

“If we were able to scale these solutions across the sector,” adds Dempsey, “we think we could reduce the upstream microfiber loss by something approaching—or maybe even greater than—90 percent relative to the current loss rates.”

And not to shift the blame and responsibility to you, the consumer, but there are a few little things you can do too. You can wash your clothes in special bags or use a washing machine ball that grabs the fibers. There’s even a special filter called a Lint LUV-R that you can attach to your washing machine, which one study showed captures 87 percent of fibers.

“It’s a fine balance to reduce fiber loss without compromising on the performance that’s required out of that material.”

But at the end of the day, we just need clothes that don’t shed so many damn fibers. Indeed, some clothing manufacturers are exploring potential innovations that would reduce shedding, such as using different kinds of materials or spinning synthetic yarn in different ways. “It’s a fine balance to reduce fiber loss without compromising on the performance that’s required out of that material,” says Sophie Mather, executive director of the Microfibre Consortium, a nonprofit founded by the outdoor gear industry to explore solutions to fiber fragmentation. (The consortium wasn’t involved in this new report, but it is collaborating with the Nature Conservancy on a road map for research into fiber release from textiles.)

A waterproof jacket needs to stay waterproof, for example, and stretchy yoga pants need to expand without tearing. “It’s not just about slapping a chemical finish on and saying, ‘We put this treatment on it. It’s going to stick the fibers in, and they’re not going to come out,’” says Mather. “I think that’s a very short-sighted view. It’s more about really understanding the intricacies of how that fabric has been put together in the first place.”

It’s not likely that all of Earth’s people will suddenly go back to wearing only all-natural fibers like wool and cotton—synthetic materials are too useful. But the microfiber pollution problem is also too big to not tackle immediately. “I think the great upside here is that, unlike so many other conservation challenges, solutions really do exist right now,” says Dempsey. “The power of some of these brands, and the potential for some of these brands to make change within their own supply chain, is massive.”