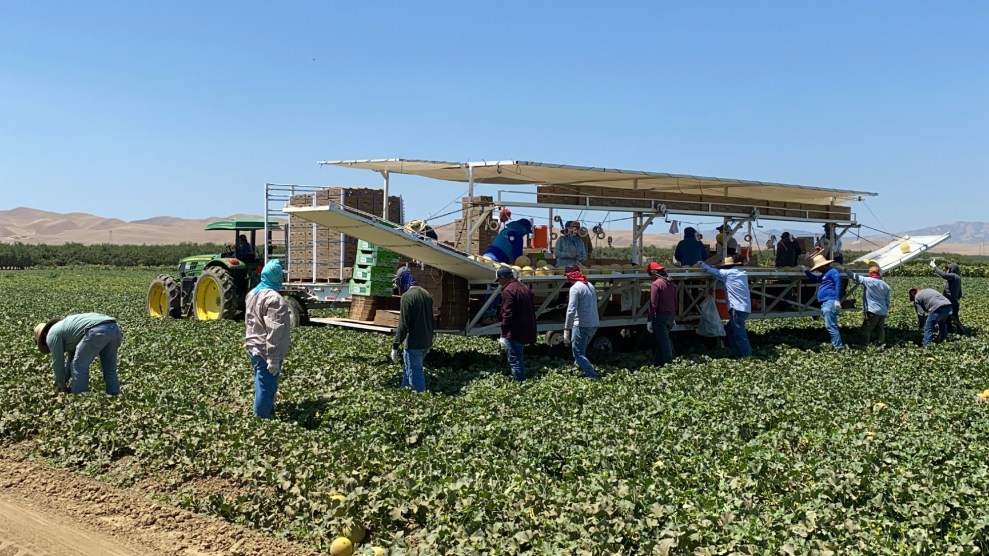 In Cantua, a small town deep within California’s farming heartland, the heat had always been a part of life. “We can do nothing against it,” said Julia Mendoza, who’s lived in this town for 27 years. But lately, she says, the searing temperatures are almost unlivable.

By midday on Thursday, the first day of a protracted, extreme heatwave in California’s Central Valley, the country roads were sizzling with heat. A young volunteer with a local environmental justice non-profit who had come to check in on the neighborhood collapsed on the sidewalk, her face bright red and damp. Construction crews working nearby quickly swept her into an air-conditioned car and handed her a cold bottle of water.

“¡Mira, el calor!” gasped Mendoza as she rushed over from her front porch. Arcelia Luna, her friend and neighbor shook her head as she poured a bottle of refrigerated water over the head and body of the two-year-old boy she was watching.

Much of California is suffering through record-breaking temperatures, just a week after a deadly heat dome blistered the Pacific Northwest. Across the west, 28 million Americans will have endured triple-digit heat this week. While coastal regions, including the Bay Area, will have been spared by cool marine air, California’s Central Valley—the state’s sprawling, agricultural innards—will have broiled.

The National Weather Service issued an “excessive heat warning” for the Central Valley from Thursday through Monday. And by mid-morning on Thursday, asphalt- and concrete-paved Fresno began shimmering with heat. There was no breeze to rustle the rows and rows of almond and pistachio trees that radiated for miles and miles out of the city. The occasional irrigation canal melded into the heat mirage that radiated off the country roads.

Researchers have been warning of such extreme heatwaves for decades, he said, but the barrage of heat surges that California and the western United States have been alarming, he said. Temperature records are being broken earlier than expected or predicted.

The vicious cycle of the climate crisis has merged with a vicious cycle of inequity in the region. Racial disparities in access to shade and air conditioning are increasingly becoming dangerous, even deadly.

Here, changing weather patterns have wrought not only periods of extreme heat, but also an extended drought—two phenomena that feed into each other. The heat has caused water reserves to evaporate too quickly, drying out the reservoirs that feed the region’s $50bn agricultural industry. With scarcely any moisture left in the ground, the desiccated landscape heats up like a hot plate, amplifying the scorching ambient temperatures.

On hot weeks like this one, Mendoza and a group of other women who live in the area gather on her front porch, seated in a circle on folding chairs under a nylon tent. The group has been campaigning to build an air-conditioned community center or a small park with trees where people can go to stay cool during what have become increasingly frequent bouts of extreme heat.

In Cantua Creek, and throughout the valley, the over-pumping of groundwater has led to a concentrating of nitrates from pesticides, fertilizer and dairy waste runoff from farms and naturally occurring arsenic. Mendoza and her neighbors aren’t able to drink the water from their taps, so trucks lug jugs of potable water to them each day. “We don’t want anything big, you know,” Mendoza said. “Just somewhere to stay cool. And clean water.

“On days like this,” she added, “I just want to be able to shower in tranquility.”

Hotter, drier conditions also mean harder, and less work for the region’s hundreds of thousands of farm workers. This week, Jesús Zúñiga has been up at 3 a.m., to get to the fields by 5 a.m. “I pick tomatoes—which is one of the toughest jobs out here,” he said, showing off the thick calluses that have developed on his hands. For hours each day, the harsh valley sun bears down on his back as he hunches over the tomato vines. Once he’s collected 50 pounds of fruit, he sprints down the neat, irrigated rows, to dump buckets full of the fruit on to trucks. His harvest ends up in grocery stores as well as fast food restaurant chains.

On several days this week, temperatures reached dangerous highs by 10 a.m. “So on these hot days we’re only able to work five or six hours, before we’d start to get sick,” he said. “But then, we only get paid for five or six hours.” At $14 an hour that isn’t enough to pay his rent and soaring electricity bills, or to support his family of five.

“By the end of the shift we are wet. Everything is wet with sweat. Sometimes my head starts to hurt, and I get dizzy,” he said. “That is when I start to have doubts, so many doubts: why are we even here?”

Farm workers die of heat at roughly 20 times the national rate, according to the Centers for Disease Control and Prevention. But as the climate crisis triggers longer, hotter heatwaves, the risks for agricultural workers will rise, said Michelle Tigchelaar, a researcher at Stanford University. Based on climate models projecting a global temperature increase of 3.6 Fahrenheit (2 Celsius) by 2050, Tigchelaar discovered that agricultural workers who currently labor through an average of 21 dangerously hot days a year will see that number nearly double over the next few decades.

In some parts of the Central Valley, the heat index through most of the summer will surpass what even healthy, young and well-hydrated workers could safely handle, according to the study, published last year. “These are the hidden costs of keeping our supermarkets and shops well-stocked,” she said.

In Fresno, the wide sidewalks were eerily empty by late afternoon. The 500,000 people who live here had all retreated to air-conditioned homes, malls or public libraries. At the Community Regional medical center in downtown Fresno, Dr René Ramirez said he’d already seen a few patients coping with severe sunburns, heat exhaustion and other heat-related illnesses in the emergency department that day. Many of his patients don’t have insurance, and many suffer from underlying health issues including heart disease, high blood pressure and, in a region with some of the worst air pollution in the country, asthma. All of those conditions make it harder for people to cope with extreme heat, even those who are acclimatized to high temperatures.

“From my perspective, everybody should be entitled to access cooling, whether that’s at home or at community centers,” he said “I think that is something that’s an inherent right.”

Nora Madden, 65, who has been living in her car or staying at motels for the past year, said her usual strategy to survive heatwaves is to buy a bag of ice from the dollar store in the morning, stow it in her icebox and chew the cubes throughout the day.

But on Thursday afternoon it had become too hot to sit in her car, so she headed over to a community cooling center downtown. The city opens these centers when temperatures are forecasted to reach 105 Fahrenheit (41 Celsius), or higher. “But what about when it’s 103 Fahrenheit, or 100 Fahrenheit?” Madden said. The stark, unshaded rows of concrete that make up some of Fresno’s poorest neighborhoods are unforgiving heat islands. “Do we have to die at 103?” she said.