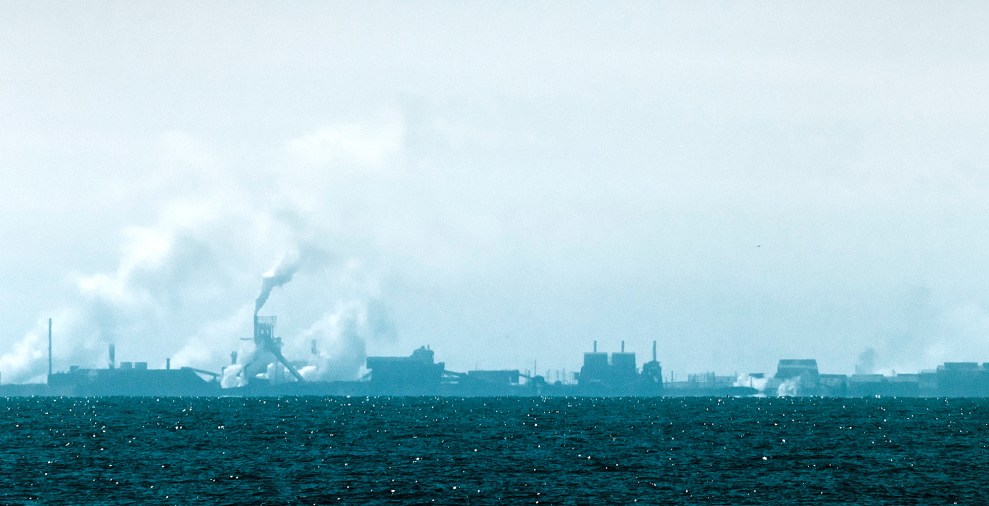 This story was originally published by Grist and is reproduced here as a part of the Climate Desk collaboration.

For generations, the Keweenaw Bay Indian Community has made its home along the shores of Michigan’s Lake Superior, developing a culture and livelihood closely tied to the waterbody, the largest freshwater lake by surface area in the world. Species such as salmon, lake trout, and walleye play a key role in the subsistence fishing tribe’s day-to-day life.

In the last few decades, however, pollutants like mercury and polychlorinated biphenyls, or PCBs, have put fishing cultural traditions at risk in the Great Lakes. Now, scientists are warning there’s a new threat—PFAS, a group of man-made toxic substances also known as “forever chemicals” found in everyday household items.

Similar to DDT in the 1950s and 60s, PFAS compounds increase in concentration as they move up the food chain.

For the first time, officials in Michigan and Wisconsin have issued a fish consumption advisory for PFAS in the Great Lakes. The chemicals, or per- and polyfluoroalkyl substances, bioaccumulate in the environment—similar to DDT in the 1950s and 60s—building in concentration as they move up the food chain. They have been linked to health issues like reproductive and liver damage.

According to the new advisories, adults should limit their consumption of rainbow smelt, a fish that has been consumed by generations of Indigenous peoples, caught in Lake Superior to just one single eight ounce serving per month. In a 2013 study, 87 percent of Keweenaw Bay Indian Community members surveyed indicated they relied on Lake Superior fish as a major food source or for their livelihood.

“It’s hard for the community,” Kathy Smith, a member of the Keweenaw Bay Indian Community and a habitat specialist for the tribe’s natural resources department, told the Traverse City Record-Eagle. She highlighted that the PFAS advisory adds to a number of fish consumption advisories that have been issued previously for species important to the community.

Similar PFAS advisories have been issued in the last few years in New Jersey, Minnesota, New York, Wisconsin, and for inland water bodies in Michigan.

The warnings point to the increasing pervasiveness of PFAS in American lakes, rivers, and streams. In 2020, a study of 2,000 fish from across Michigan revealed that PFOS, a PFAS chemical, was found in 92 percent of the biological samples. An analysis published by the Environmental Working Group this week found that the number of industrial sites across the United States that use PFAS, and may be releasing it into the environment, is over 41,000. An analysis by the U.S. Food and Drug Administration in 2019 found that 14 out of 91 foods tested contained PFAS.

Citing the growing contamination nationwide, U.S. Representatives Democrat Debbie Dingell and Republican Fred Upton, both of Michigan, introduced the bipartisan PFAS Action Act of 2021 in April. Late last month, the bill passed in the House of Representatives 241 – 183. The law would require the U.S. Environmental Protection Agency, or EPA, to establish national standards for PFAS levels in drinking water and would designate PFOA and PFOS, two PFAS chemicals, as “hazardous,” thereby allowing the EPA to take action to clean up contaminated sites across the country and allocate $200 million for water utilities and wastewater treatment.

Upton and Dingell especially highlighted the threat PFAS has posed to Michigan families. In 2018, the chemicals were found in the drinking water for Parchment, Michigan, residents at 20 times the federal health advisory limit. The sample was collected 30 days before the public announcement was made, meaning residents were drinking the contaminated water for upwards of a month.

“PFAS should absolutely be a top priority, and we need comprehensive legislation to…protect public health and the environment.”

Some groups representing the water sector, including the American Water Works Association and the National Association of Clean Water Agencies, disagree with the PFAS Action Act, saying that it would absolve polluters from the “polluter pays” structure of EPA Superfund cleanup sites and put the burden on water treatment facilities. Some Republicans have also voiced concerns about it becoming a “de facto ban” on PFAS chemicals that are used beneficially, like for contact lenses or medical safety gear.

But Christine Santillana, legislative counsel for Earthjustice, a public interest environmental nonprofit, said the evidence has been there for decades that PFAS is toxic, and action needs to be taken. “PFAS should absolutely be a top priority,” she told Grist, “and we need comprehensive legislation to ensure deadlines are put in place to protect public health and the environment from toxic PFAS being released into our air, soil, and water.”

A previous version of the PFAS Action Act stalled under Trump, but now has renewed hope with President Joe Biden’s support. The White House has said Biden will sign the bill if it reaches his desk. Senate Majority Leader Chuck Schumer has not revealed whether he will bring the bill to the Senate floor or not.

It’s unlikely to be taken up for a vote in this legislative session, according to Santillana. “We are pushing the Senate to take this up as soon as possible,” she told Grist, “but it’s unlikely they’ll do so this session given infrastructure priorities and budget reconciliation.”

Still, environmental leaders say getting the bill passed in the House was a meaningful step. “Getting Republicans on board is a big step,” said Santillana. The PFAS Action Act was signed off on by 23 Republicans. “Now it’s really the Senate’s turn to push this across the finish line,” she said.