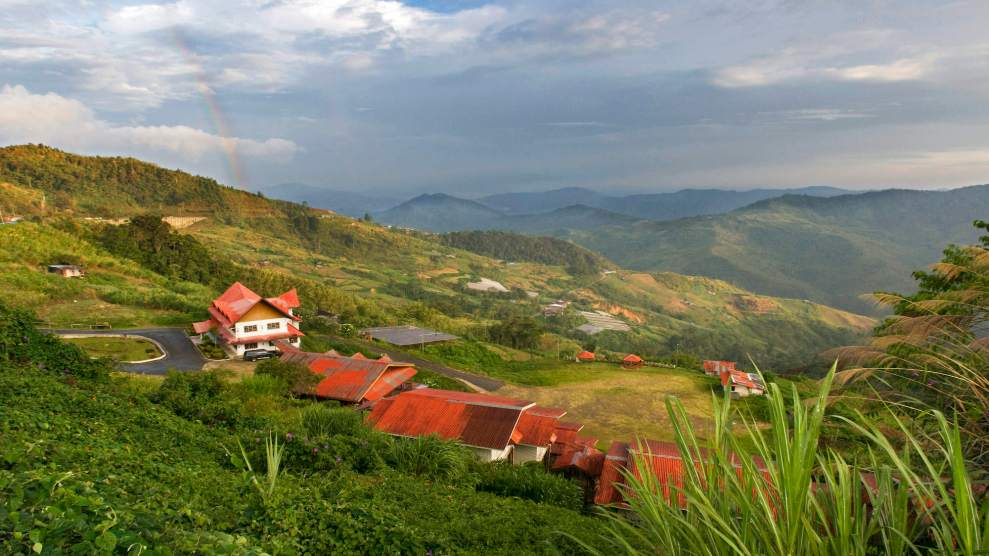 Malaysia’s Kinabalu Park, which surrounds Mount Kinabalu, the 20th-largest peak in the world, is home to a nickel mine like none other. In lieu of heavy machinery, plumes of sulfur dioxide, or rivers red with runoff, you’ll find four acres of a leafy-green shrub, tended to since 2015 by local villagers. Once or twice per year, they shave off about a foot of growth from the 20-foot-tall plants. Then, they burn that crop to produce an ashy “bio-ore” that is up to 25 percent nickel by weight.

Producing metal by growing plants, or phytomining, has long been tipped as an alternative, environmentally-sustainable way to reshape—if not replace—the mining industry. Of 320,000 recognized plant species, only around 700 are so-called “hyperaccumulators,” like Kinabalu’s P. rufuschaneyi. Over time, they suck the soil dry of metals like nickel, zinc, cobalt, and even gold.

While two-thirds of nickel is used to make stainless steel, the metal is also snapped up by producers of everything from kitchenware to mobile phones, medical equipment to power generation. Zinc, on the other hand, is essential for churning out paints, rubber, cosmetics, pharmaceuticals, plastics, inks, soaps, and batteries. And, as supplies of these hard-to-find metals dry up around the world, demand remains as strong as ever.

The idea of phytomining was first put forth in 1983 by an agronomist at the US Department of Agriculture named Rufus L. Chaney. Other research groups before the Malaysia team have shown that the solar-powered and carbon-neutral metal extraction process works in practice—a key step to winning over mining industry investors, who have insisted on field trials of several acres to show proof of principle. The most recent data out of Kinabalu Park, a UNESCO-listed heritage site located on the island of Borneo, is finally turning industry heads, as they show the scales have tipped in favor of phytomining’s commercial viability.

“We can now demonstrate that metal farms can produce between 170 to 280 pounds per acre annually.”

“We can now demonstrate that metal farms can produce between 170 to 280 pounds per acre annually,” said Antony van der Ent, a senior research fellow at Australia’s University of Queensland whose thesis work spurred the Malaysia trial. At the midpoint of that range, a farmer would net a cool $3,800 per acre of nickel at today’s prices—which, van der Ent added, is “on par with some of the best-performing agricultural crops on fertile soils, while operating costs are similar.”

Take, for instance, palm oil – a crop as notorious for its profitability as its role in driving deforestation in Asia and Africa. Farmers planting oil palm trees, prior to the pandemic, stood to clear 3.12 tons of crude oil annually on average—or $2,710 in today’s prices. For farmers in Malaysia and Indonesia, where 90 percent of the world’s palm oil is grown, nickel farming might just prove a more attractive option.

“At this stage, phytomining can go full-scale for nickel immediately, while phytomining for cobalt, thallium, and selenium is within reach,” van der Ent said.

While van der Ent’s team has won over some in the mining industry, adoption of phytomining isn’t yet on the fast track. That’s despite the Malaysia plot and other examples suggesting that while plants are of course less capital intensive and more environmentally friendly than traditional mining, they are also more efficient. Still, in an industry that van der Ent characterizes as resistant to change, phytomining’s immediate future could be more as a complement to traditional mining than its replacement.

Several Indonesian nickel mining companies are now looking to partner with van der Ent’s Malaysia team. “We have lined up several industry partners who’ve agreed to implement trials in Indonesia,” he said. “But due to COVID, this development is currently on hold.”

When travel restrictions are lifted and borders open up, van der Ent hopes to show that there are a number of advantages to phytomining that traditional mining simply can’t offer. “There is an abundance of unconventional ores that could be unlocked through phytomining,” he said. One example is soil abundant in tropical regions that typically contain 0.5 to 1 percent nickel by weight, which is below the cut-off where a company could profitably implement conventional strip mining.

Even if the Indonesia partnerships succeed, big mining firms aren’t about to swap their strip mines for shrubbery overnight.

Strip mining takes place in thick layers of soil containing more than 1 percent nickel by weight that occur in places like Brazil, Cuba, Indonesia, the Philippines, and New Caledonia, the French territory in the South Pacific. This process involves removing a layer of soil or rock, referred to as overburden, before mining that seam for the target metal. And it comes at great environmental cost. Because nickel is difficult to extract, the process calls for heavy machinery that runs on diesel and generates carbon, as well as large, acid-leaching installations needed to separate the metal from its ore.

Those nickel-rich soils, however, are becoming increasingly scarce—and it might well be that an undersupply eventually drives more and more companies to embrace phytomining. That, and the fact that bio-ore contains 20 to 30 percent nickel by weight, and is also more compact and cheaper to transport than typical ores—which hover around the one to three percent mark by weight.

Still, regardless of how the Indonesia partnerships eventually go, it’s unlikely that major mining companies will swap out strip mines for shrubbery overnight. That’s why phytoremediation, a spin-off technology which complements mining rather than replacing it, might just be the thin end of the wedge.

Currently, as strip mining happens, the surrounding topsoil becomes littered with toxic metal tailings. This layer typically has to be dug out, carted off, and sold to landfills, often at great cost to the mine operator. In the case of coal extraction, the cost of rehabilitation, for strip-mined land, averages $71,000 per acre. In the EU alone, there are an estimated 130 million acres in need of clean up. It’s a hefty bill for mining companies—and that’s if they choose to foot it at all. High-profile inquiries in Indonesia, Australia, and the US show mining companies are all too often willing to shirk rehab responsibilities.

The residue, though, is commonly composed of nickel, cobalt, sodium, and cadmium. With a little physical or chemical treatment of the soil, one can create precisely the conditions in which certain hyperaccumulators thrive—it’s as simple as planting a seed and recovering the additional ore at a later date. “Trash from treasure,” as van der Ent put it.

Marcus Radford, an environmental consultant based in Western Australia, added that phytomining on these sites is a win-win. It would make mine remediation cheaper, quicker, and easier. Add to that, it would revitalize the local ecosystem. “It’s a way of putting back, rather than taking away,” he said.

Industry support hinges on wider implementation, but scaling up requires funding, so there’s a chicken-and-egg problem.

Phytoremediation has been tested in France, Greece, Albania, and Italy, but the experiments have seen varying levels of success. In Italy’s Tuscany region, for example, researchers planted various cottonwood and willow species over arsenic-contaminated pyrite waste. While both plants grew successfully in challenging conditions, arsenic wasn’t recovered at a significant level. That said, small-scale phytoremediation in France and elsewhere, has been shown to recover nickel, zinc, and cadmium.

In order for the mining industry to adopt phytoremediation, the practice will need boardroom backing, van der Ent explained, adding that the support turns on wide-scale implementation. Scaling up, however, requires funding, so there’s a bit of a chicken-and-egg problem.

“It’s only uptake by industry that is holding up translation of phytomining to large-scale application,” van der Ent said. “Industry invariably asks for a field-scale demonstration of phytomining to prove operational viability, but is not prepared to fund such a pilot project. I firmly believe that once a proven field demonstration at scale exists, this will attract funding.”

Van der Ent is optimistic that the pandemic-delayed push into Indonesia will do the trick. Just to be sure, though, he’s also planning to scale the Malaysia trial up to nearly 50 acres—which would call for the application of an industrial-scale hydrometallurgical plant, which separates the target metal, in this case nickel, from its ore via a water-based medium. They won’t have to manually burn the crop as they are doing now—meaning the process will be carbon negative, as opposed to what van der Ent labels as carbon neutral.

Once COVID restrictions lift, he hopes the team will bring new life to the term “smelting plants.”