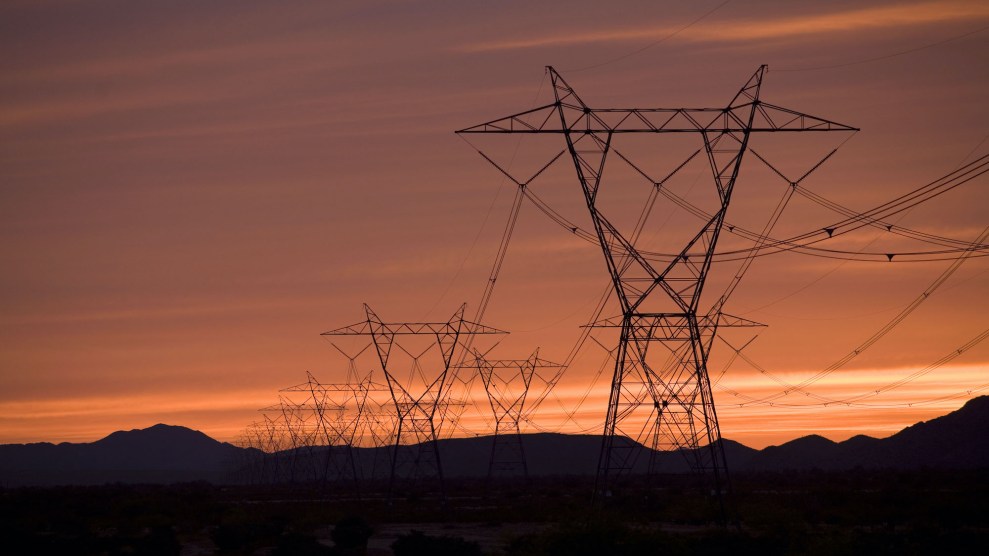 This story was originally published by WIRED and is reproduced here as part of the Climate Desk collaboration.

You can almost hear the electrical grid creaking and groaning under the weight of the future, as two forces converge to push it—often literally—to its breaking point.

One force is climate change, which can exacerbate disasters that take down parts of the grid, as Hurricane Ida did this summer, knocking New Orleans offline just as a heat wave settled in. Or extreme weather can suddenly spike the demand for energy just when the grid is least able to provide it, like during last winter’s Texas freeze and subsequent power system failure.

The other force, ironically enough, is the massive deployment of renewable power—the best way to fight climate change and avoid these kinds of disasters. But this will demand a fundamental rethinking of how the grid operates. Gas and coal power plants generate continuous power by burning fuel, and how much they burn can be modulated based on the demand for electricity. But the generation of solar and wind energy fluctuates. The sun doesn’t shine at night, and turbines don’t turn without wind.

As renewable sources take over the energy mix, utilities won’t be able to quickly spin up more supply by burning fossil fuels.

This can create a mismatch between demand and supply. Imagine there’s a heat wave. You get home from work at 6 pm and your house is sweltering, so you crank up the AC. The problem is that everyone else is doing that too. This is the time of day when people use the most energy, as they return from work and start cooling their houses, cooking, and running clothes washers and dryers.

Yet by 6 pm, the sun is going down, and solar panels aren’t producing much power. And the wind can stop blowing at any time, leaving a deficit between demand and generation. (Utilities’ ability to load giant batteries up with solar power in the morning and store it for when customers need more energy is currently still quite limited.)

This puts tremendous stress on the grid, which has to exist in constant balance. Utilities have sophisticated systems for predicting when demand will go up and down, so on most days this isn’t a problem. They can buy extra power from neighboring utilities if need be. Or, they can strike that balance by burning more fossil fuels—but that, of course, spews more carbon. But if there’s an unexpected spike in demand and a utility doesn’t have the requisite power, it has to restore balance by cutting demand—with blackouts.

As renewable sources take over the energy mix, utilities won’t be able to quickly spin up more supply by burning fossil fuels. So a future grid that runs on an often intermittent supply of energy from renewables will need to be far more flexible to compensate.

University of Southern California environmental engineer Kelly Sanders, who studies how the grid is evolving, is researching a strategy called pre-cooling, in which home users would turn up the AC earlier in the day when the grid is buzzing with clean solar energy. Basically, they’d shift peak demand away from the return-to-home rush. “You can get a lot of electricity customers to use electricity much more when the sun is out, and then decrease that usage when the sun goes down, so better aligning our behavior with the availability of wind and solar,” says Sanders.

“There’s this idea in the power systems community that consumers themselves can be a grid asset.”

The same principle would apply to heating. In some colder areas of the US, demand during the winter spikes at 6 or 7 in the morning, when people are waking up in freezing houses. Here people could start to preheat their homes at 4 a.m. Sanders envisions that local officials might also tweak the operation of critical infrastructure to coincide with the availability of renewable energy—maybe a region would time the treatment of its drinking water to when there’s a lot of solar power available.

While before home users were just consumers of electricity, this would make them more active participants in maintaining the grid. (No pressure.) “There’s this idea in the power systems community that consumers themselves can be a grid asset,” says Sanders.

Sanders is trying to figure out how feasible this behavioral shift would be for a given resident. For instance, a well-insulated house will better hold onto that cool or warm air throughout the day. But it also depends on the size of the home and whether it’s multilevel. If you live in a big, drafty house and you pre-cool, only to find it’s warmed up again by the time you get home, that’s wasted energy and money.

Location makes a big difference in heating and cooling needs, as well. A home on the coast may cool around the same time each day when the fog drifts in, while a home in a desert may get reliably baked for as long as the sun is up. And sunset doesn’t necessarily mean big drops in temperature everywhere. Thanks to the heat island effect, urban areas can be 20 degrees F hotter than surrounding rural areas because all that concrete absorbs the sun’s energy and slowly releases it at night.

Now Sanders is hoping to build a model to determine how much a given neighborhood will warm as the climate changes, based on projections about future temperatures, to estimate how much more energy people will need to stay cool. “That’s really important for managing the grid,” says Sanders, “trying to understand how much new generation we might need to accommodate those increases in cooling. It might also allow us to understand how vulnerable populations need air conditioning in the future.”

“If we could actually deploy [electric cars] and make them support the grid, then we will save a lot of effort in investing in infrastructure.”

Some customers are already becoming more active participants in managing when they draw from the grid. Today, for example, Google announced a program called Nest Renew, in which users of its smart thermostat can automatically shift their heating and cooling usage to times of the day when more renewable energy is available. Doing so earns them credits that they can have Google direct as funding to nonprofits like GRID Alternatives, which focuses on bringing solar power to low-income communities. Nest Renew is putting up $2 million for the program’s first year.

The idea in a future grid is to better distribute small changes in energy use across a utility’s territory, better spreading out demand throughout the day. “Smart homes and smart businesses are actually going to be a critical element in being kind of the balancing pieces to the intermittency,” says Ben Brown, director of product management at Google Nest.

Another idea is to actually draw power from users’ homes … well, at least from their cars. Electric vehicles could be charged up with power drawn during peak solar and wind production times, and homeowners could tap into that power later. “We’re going to have all these batteries driving around,” says Patricia Hidalgo-Gonzalez, director of the Renewable Energy and Advanced Mathematics Lab at UC San Diego. “If we could actually deploy them and make them support the grid, then we will save a lot of effort in investing in infrastructure.”

Community microgrids could decrease reliance on the larger grid if households pooled the supply from car batteries or small solar arrays. “We could mitigate a lot of the need for power and we could share among our neighbors,” says Hidalgo-Gonzalez. “If our neighbor has PV panels next door, then we could get electricity from them instead of having to draw from the main grid when we’re in a congestion scenario,” meaning high demand.

A big home storage battery can also keep power on during a blackout; these remain expensive but are certainly getting cheaper. For example, Tesla’s Powerwall will currently set you back $10,500, in addition to the solar panels you’d need to charge it up.

Yet while a move to electric cars might give every home an emergency battery, it’ll have another consequence. “If we move to electrify, say, transportation, that’s going to really increase our demand for electricity,” says Carl Imhoff, who manages the grid program at the Pacific Northwest National Laboratory. “And we might need to find a way to share generation capacity.”

In an ideal world, the problem of intermittent renewables—and the need to share power across geographic regions—would be solved by creating a single, national grid, so that when the afternoon sun shines on solar panels in the Southwest, excess energy can be shuttled to the East Coast, just as it is hitting evening peak demand. And when the West Coast hits its own evening peak, it could draw wind power from the Midwest.

But, in fact, the US grid is split into three regions: the Western Interconnection, the Eastern Interconnection, and Texas’s own smaller independent grid. These segments can exchange a little bit of power across their borders, but they can’t send lots of energy long distances. “They’re pretty much islands unto themselves,” says Imhoff. And that means they can’t help each other out during weather-related emergencies. Last winter, during Texas’ freeze, state energy operators couldn’t import power from either of the larger interconnections.

Connecting these regions is a time-consuming and costly proposition: It will require running high-voltage lines through multiple states, each with their own regulations. Some legislators might be loath to approve lines that don’t actually feed power to their state. While power experts think a unified grid is ultimately the solution, in the short term, user-driven technologies like precooling and smart thermostats can help make power demand more flexible at the local level, a step towards a grid that’s both cleaner and more stable. “The big coin of the realm that we’re looking at is the notion of adding more flexibility to the grid,” says Imhoff. “You need more flexibility to handle some of that renewable variation. That same flexibility enables us to make the grid more resilient to outages and attacks and weather extremes, as well.”