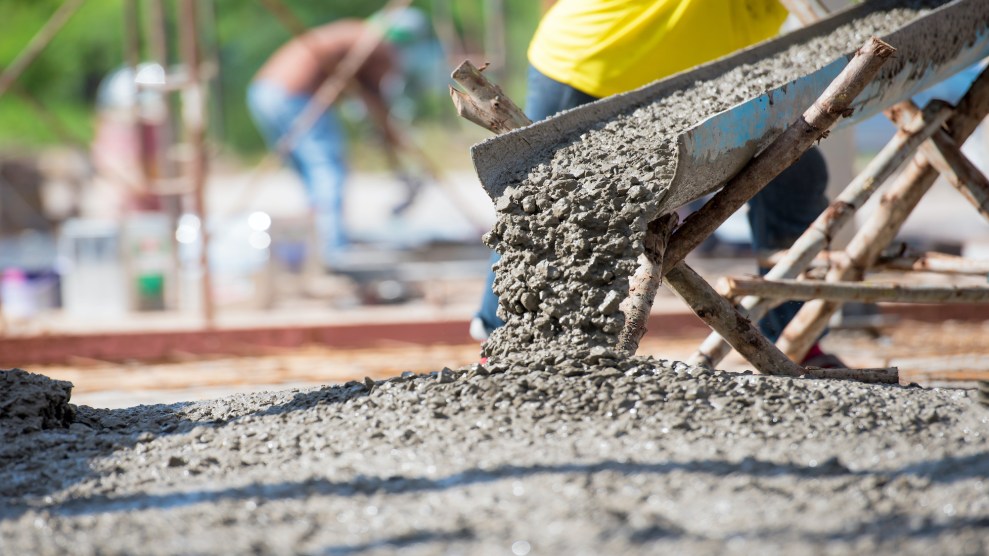 Cement makers around the world have pledged to cut their greenhouse gas emissions by up to a quarter this decade and reach net zero by 2050, in a move they said would make a major difference to the prospects for the Cop26 climate summit.

The industry is responsible for about 7 percent to 8 percent of global carbon dioxide emissions, the equivalent of more than any individual country except China and the US. Cutting emissions from cement production is difficult, because the chemical processes used to make it and concrete release CO2.

The Global Cement and Concrete Association (GCCA), which represents 40 of the world’s biggest producers and about 80% of the industry outside China, made the pledge on Tuesday. Several major Chinese cement and concrete companies, which account for about 20 percent of China’s market, have also joined.

Companies have been working for more than a decade on ways to change the chemical processes and use different materials, as well as becoming more energy efficient. Tuesday’s pledge marks the first time that major producers have made a public commitment on the climate.

Thomas Guillot, the chief executive of the GCCA, said: “This is an important milestone—it’s a big thing. Concrete is the second most used material in the world after water. We are the first sector to do this as a joint commitment, but I hope there will be many more and that will inspire many more others to do the same.”

“Everybody recognizes cement and concrete production is one of the hardest economic activities to decarbonize.”

Guillot said the pledge was not dependent on actions from government, though the industry would prefer countries to set a carbon price and to develop policies to accelerate the process. The companies have pledged to reach net zero without offsetting emissions, a controversial practice that some in other industries plan to rely on to meet net zero targets.

The cuts in emissions this decade would be made using existing technologies, but the industry’s roadmap for 2030 to 2050 would require about one-third of the reductions to come from the use of carbon capture and storage technology, which is not yet in widespread commercial use.

Adair Turner, the chair of the Energy Transitions Commission think tank, said the move was a “huge step forward” given the nature of the industry. “Everybody recognizes cement and concrete production is one of the hardest economic activities to decarbonize. Achieving that will require better building design and construction, multiple forms of efficiency improvement, and carbon capture and storage,” said the peer.

Mike Childs, head of science at Friends of the Earth, said companies should also be trying to use alternatives to concrete. “Switching to cleaner fuels such as electricity or hydrogen produced by renewable energy can cut carbon [from cement], and innovation may one day help address process emissions. So, while these measures are good, they are not the whole answer. We need to reduce cement usage as well as make the process cleaner. One way of doing that is by switching to timber,” he said.

Cutting emissions from cement and concrete production by up to 25 percent by 2030 is estimated to avoid about 5 billion tons of CO2. Emissions from the industry would be expected to rise over this period, as the market for both materials is forecast to nearly double from $333 billion in 2020 to about $645 billion in 2030.

Nick Molho, the executive director of the Aldersgate Group of companies with an interest in sustainability, said the announcement was significant. “Coming from an industry that is energy intensive and complex to decarbonize, today’s commitment shows there is growing momentum across the global business community to deliver on the 1.5 C target in the Paris Agreement,” he said.

Molho called for the UK government to do more to encourage emissions cuts from industry. “The government’s net zero strategy must grow the market for green cement through the introduction of product standards and public procurement criteria that mandate greater resource efficiency and lower embodied emissions.

“As cement plants often operate away from large industrial clusters, government policy should also support cement plants to connect to the carbon capture and hydrogen infrastructure that will be developed in these clusters.”