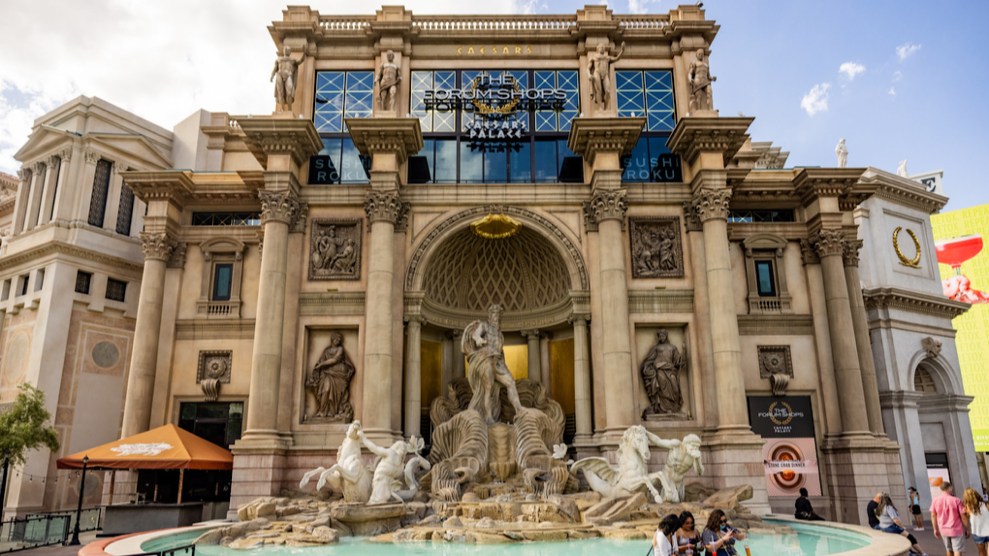 People sit at a replica of Trevi Fountain outside The Forum Shops at Caesars Palace hotel and casino in Las Vegas, Nevada, U.S., on Sunday, May 02, 2021. Roger Kisby/Bloomberg/Getty

Caesars Entertainment, one of the world’s largest casino-resort operators, is set to host the Super Bowl of climate change denial this month at its iconic Caesars Palace in Las Vegas.

On October 15, the Illinois-based Heartland Institute is scheduled to convene its three-day “International Conference on Climate Change,” an annual confab at which the right-wing think tank that cut its teeth shilling for the tobacco industry in the 1990s parades its stable of pundits and contrarians who reject climate science.

This year’s event, dubbed “The Great Reset: Climate Realism Vs. Climate Socialism,” will dive headfirst into the conspiracy that world governments are simply using climate change to control people’s lives.

“The global climate agenda, as promoted by the United Nations, is to overhaul the entire global economy, usher in socialism, and forever transform society as one in which individual liberty and economic freedom are crushed,” reads a description of the event.

Keynote speakers include several Trump acolytes, including a coal lobbyist and a professor who said Earth was in a “CO2 famine.”

The list of keynote speakers is a who’s who of the denial movement, including William Happer, the retired Princeton University physics professor who served as an adviser to President Donald Trump and has declared Earth is in the midst of a “CO2 famine”; Myron Ebell, director of the right-wing Competitive Enterprise Institute who led the Trump EPA transition team and was a key figure in Trump’s decision to withdraw the US from the historic Paris climate agreement; and Steve Milloy, a former cigarette and coal lobbyist who also served on the Trump EPA transition team.

Like most casinos, Caesars Entertainment hosts all kinds of events. The company itself donates to candidates across the ideological spectrum, but, since 2012, has generally contributed more to Democratic campaigns each election cycle. But the Heartland event runs counter to the $25 billion casino giant’s own corporate pledges on climate change, which includes “using the methodology prescribed by” United Nations scientists to design plans to eliminate planet-heating emissions throughout its supply chain.

The company’s website features an entire page on climate change and its “commitment to science-based goals.” On it, the company touts its “climate leadership” and says it is “committed to developing science-based” climate targets and “dedicated to collaborating with other organizations to advance industry-wide and overall corporate climate leadership.”

The firm, which owns Caesars Palace and dozens of other casino resorts, did not respond to HuffPost’s request for comment Monday. But less than two months ago, the company pulled the plug on a conference it was set to host in Las Vegas on behalf of a group that espouses the fringe conspiracy known as QAnon.

The Heartland Institute’s conference was initially christened the “Nongovernmental International Panel on Climate Change,” or NIPCC. The name was an unsubtle attempt at branding Heartland’s modest gathering of fringe scientists and political cranks as a legitimate alternative to the U.N.’s Intergovernmental Panel on Climate Change, the premiere global climate science body made up of top researchers from more than 100 countries.

“HuffPost won’t be getting any credentials for this conference…You can watch the live-stream if you want to cover it.”

Heartland’s hard-line climate denial may have filled its coffers throughout the early 2000s as oil and coal companies pumped money into its campaigns to harass scientists and confuse the public over what accumulated carbon does to the atmosphere. But by the early 2010s, even ExxonMobil Corp., one of the fiercest opponents of climate science, stopped giving Heartland money.

Far-right megadonors stepped in to fill the void. Hedge fund billionaires Robert and Rebekah Mercer began giving the nonprofit millions. The donations helped prop up the institution, giving Heartland newfound influence in Washington when former President Donald Trump, a fellow recipient of Mercer money, took office and began a damaging but quixotic quest to blind the federal government to the long-understood realities of fossil-fuel-induced warming.

Still, it didn’t take long for the group to wither under fresh scrutiny. In 2017, while goading the new Environmental Protection Agency leadership to host a public debate over climate science, Heartland proposed as one of its debaters a convicted child sex offender. Within months, HuffPost revealed that one of Heartland’s top officials had defended the nonprofit’s former marketing chief against charges that he stalked and harassed a young female employee.

In 2019, the once-ascendant think tank retreated back into its ideological fortress, denying HuffPost and other major news outlets press credentials to cover that year’s conference, held at the Trump International Hotel in Washington, DC. “HuffPost won’t be getting any credentials for this conference,” Heartland’s Jim Lakely wrote at the time. “You can watch the live-stream if you want to cover it.”

By 2020, Heartland’s brand of outright climate denial had begun to lose sway as mounting disasters made tangible what scientists had warned for decades would come of unchecked emissions. It attempted to win back relevance by plucking from obscurity a German teenager who, with her blond hair and serious tone, superficially offered deniers their own version of Greta Thunberg, the Swedish teen whose climate protests inspired a global movement.

By the end of winter 2020, Heartland laid off at least 10 staffers amid worsening financial woes.

“Heartland is broke,” one long-time staffer said in a text message HuffPost obtained at the time.

Tickets for Heartland’s event at Caesars Palace go for $250 per head.